What type of thinker are you?

HomeGeopoliticsWhat type of thinker are you?

What type of thinker are you? 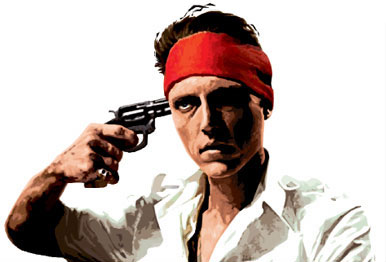 My early career in agricultural commodities was inspired by Howard Marks aka Mr Nice. An Oxford educated physicist who garnered infamy as a notorious cannabis smuggler, CIA, MI6 and IRA spy, convicted drug baron and eventually a motivational speaker which is where our paths crossed. Almost a lifetime ago at the Hackney Oceans theater where i had the honor of meeting and sharing a spliff with him. It was from him that i learned that convention is control and in life you are either a contrarian of a victim.

“A Philippine-brothel-owning member of the House of Lords was staying at the house of a Spanish Chief Inspector of Police. The Lord was being watched by an American CIA operative who was staying at the house of an English convicted sex offender. The CIA operative was sharing accommodation with an IRA terrorist. The IRA terrorist was discussing a Moroccan hashish deal with a Georgian pilot of Colombia’s Medellín Cartel. Organising these scenarios was an ex-MI6 agent, currently supervising the sale of thirty tons of Thai weed in Canada and at whose house could be found Pakistan’s major supplier of hashish. Attempting to understand the scenarios was a solitary DEA agent. The stage was set for something.”
― Howard Marks, Mr. Nice

Fast forward 20 years and my career had gone from the agricultural commodity sector to portfolio management. Fate has cast another mentor in my path, also by the name of Howard Marks. This Marks is the founder of Oaktree Capital, ranked 138th richest man in America by Forbes and one of my favorite investment philosophers. I take it as duty to imbibe his periodic investment newsletters. In a recent addition he chronicles two types of thinkers:

“The most outstanding characteristic of first level thinkers – and if the investing herd – is that they like things with obvious appeal. Things that are easy to understand and easy to buy” Howard Marks, September 9, 2015

Type 2 thinkers actually thinks critically. His thought process is “deep, complex and convoluted”. He questions the outcome, occurrences, probabilities, sources, the consensus and a host of other factors detailed in the link to the letter below.

We all like to think we are second level thinkers but how true is that? They are a rarity, almost a dying breed. In the era of 24 our news cycles, headline, headlines, sound bites, listicles and click-bait do we even have a choice anymore. We are seduced into believing information is knowledge. I personally cut myself off from all media for a year as i traversed South America. The result was that my thinking stagnated. Retreating from the informational tsunami is simply not an option for me. That which is worth attaining seldom comes easy so blending multiple sources, digesting the subjectivity in order to extricate original ideas, new insight and independent conclusions is the simplest way I have found to propel me on the path to being a type 2 thinker. The journey continues.

So what type of thinker are you? 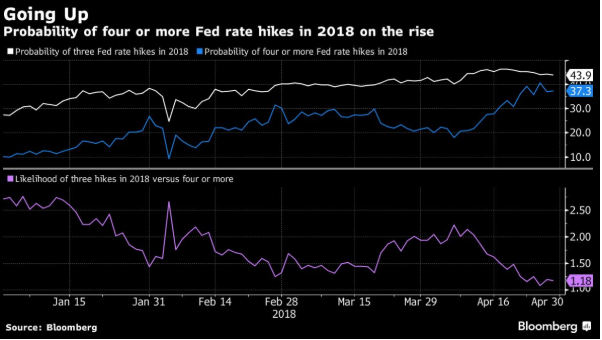 Its the end of the month which makes for interesting data releases and a torrent of earnings releases.

Major highlights include central bank decisions from the Fed and RBA, while the prospects of a May interest rate hike from the Bank of England hang in the balance as traders await UK PMI data in the coming days. UK traders will also focus on a trio of reports on activity in the manufacturing, construction and services sectors for further hints on the health of the economy

Trade talks between the United States and China will also keep investors on their toes this week, as Treasury Secretary Steven Mnuchin and other members of the Trump administration head to Beijing.

Elsewhere, in Europe, investors will await the first estimate of euro zone inflation figures to assess how fast the European Central Bank will start unwinding its asset purchase program in the wake of last week’s dovish ECB meeting outcome.

In addition the various US job indicators throughout the week to align expectations for the release of US non-farm payrolls on Friday. Once again, I are not overly concerned about the level of job creation, which remains relatively robust, but interest continues to be on the performance of the average hourly earnings component. Finally, earnings season rolls on with highlights being McDonald’s, Apple, Pfizer, Merck and General Electric to name a few of the larger market cap companies reporting. 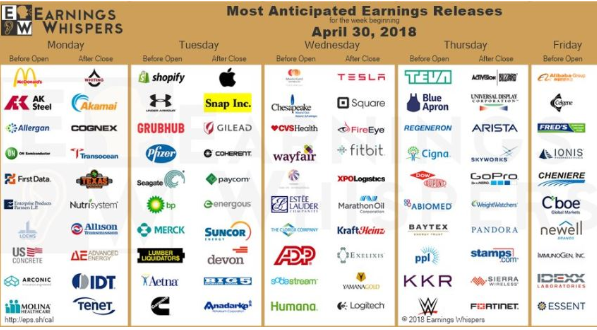 Before I forget, a recap of last weeks data is in order. 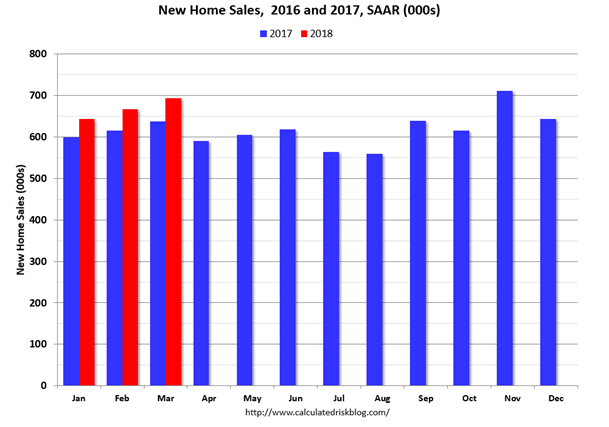 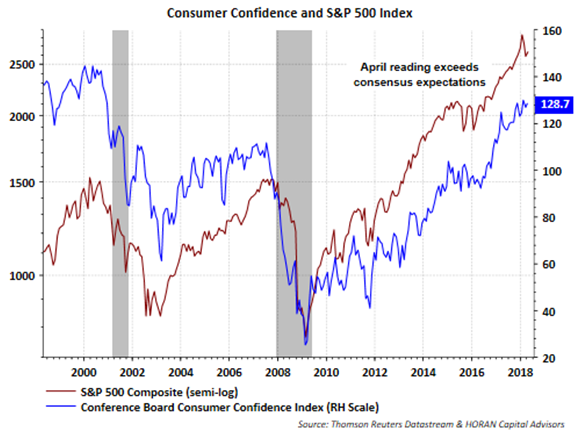 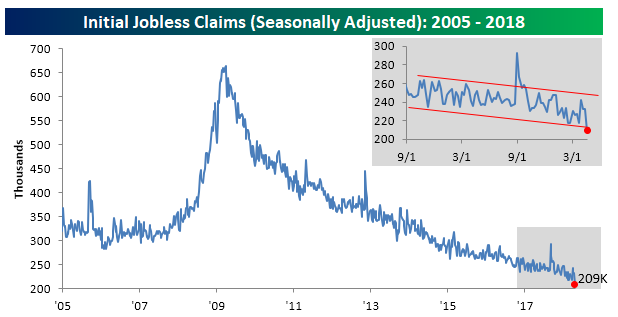 All this leads me to conclude that the US bond market scare is over and the SPX is will likely retest the highs if the US continues to print persistent above trend growth. This seems likely in my opinion. Geopolitical risk risk appears to have dissipated as North Korea and Syria appear to be under control. The real kicker is that it took a New York property developer 15 months to denuclearize the Korean peninsula which really speaks volumes about the ineptitude of those in government. I’m fairly comfortable maintain my long position in SPX at this level though I’ve been accumulating out the money puts on Tesla as a hedge. 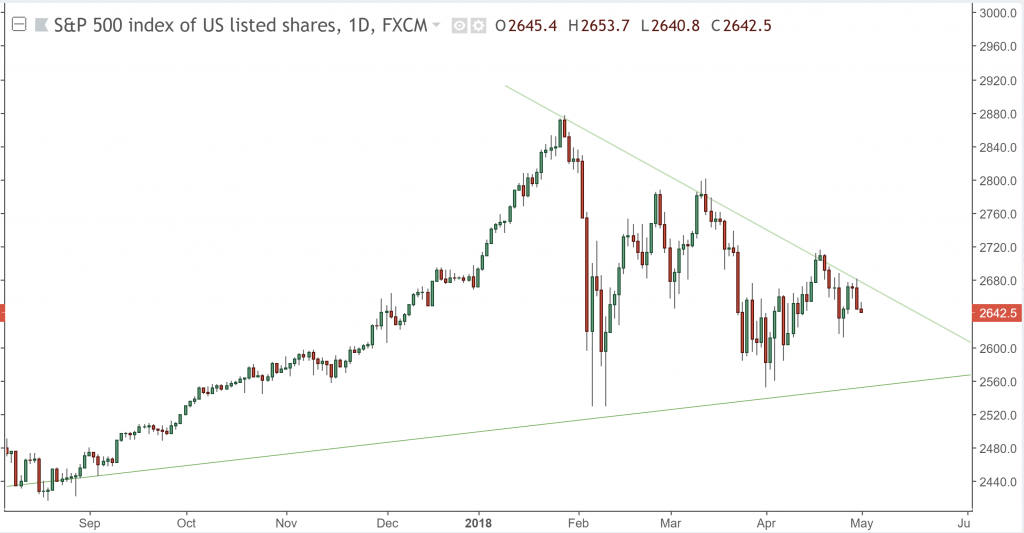 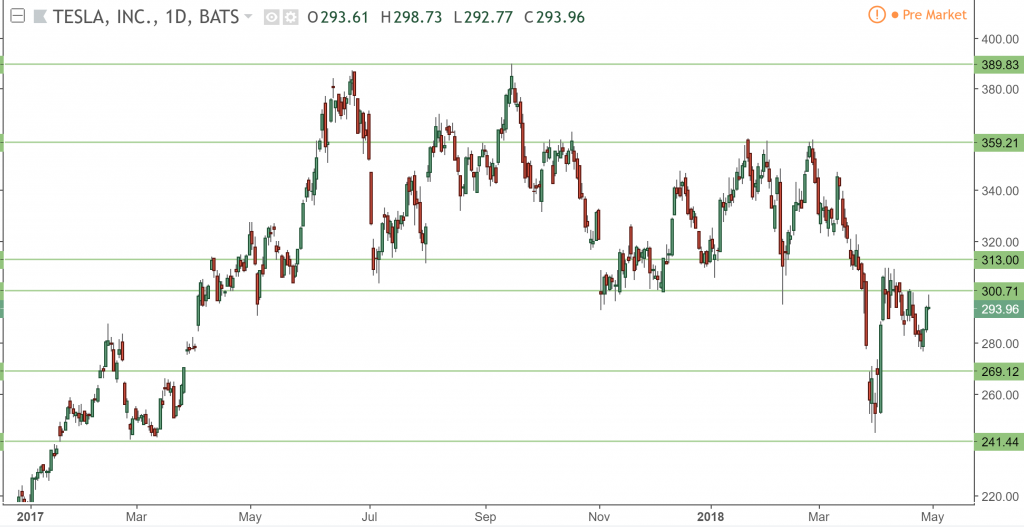