The Week Ahead – Shorting the Euro

HomeGeopoliticsThe Week Ahead – Shorting the Euro

The Week Ahead – Shorting the Euro

The Bank of Canada after keeping overnight rates at 0.50% since July 2015 decided to raise it by 25 basis points to 0.75%. USD/CAD sold off significantly after the rate hike announcement. This was surprising because hard data from Canada leading up to the meeting had been positive and members of BOC had dropped many hints of their intentions. Hence rate hike was a foregone conclusion.

The most noteworthy point that Janet Yellen said in her statement was that federal funds rate would not have to rise much to get to a neutral policy stance. With this one point, her stance is now leaning dovish.

In this regard, as we noted in the FOMC statement last month, inflation continues to run below our 2 percent objective and has declined recently; the Committee will be monitoring inflation developments closely in the months ahead.

Regarding Balance Sheet Normalisation……The Committee currently expects that, provided the economy evolves broadly as anticipated, it will likely begin to implement the program this year.

US crude inventories decreased by a whopping -7.564 million barrels on the expectation of -2.3 million drop. Baker Hughes US oil rig count increased by 2 from 753 to 765. Oil production was 9397k barrels per day for week ending 07/07/2017, an increase from 9338k barrels per day in the previous week.

“Transitory” and “idiosyncratic factors” were the justifications that the Federal Reserve gave for weak inflation. Both core and headline inflation had been under 2% target for 3 and 2 months respectively. Well, not to worry, it is just transitory.

Headline retail sales was +5.6% year on year in January 2017. In June, it had dropped down to 2.8%. Maybe retail sales are transitory as well.

With that said, I still expect more expansionary monetary policy rather than contractionary to be implemented because Governor Kuroda said that he will do “whatever it takes” to attain the 2% core inflation target. Despite already being so loose with monetary policy, Governor Kuroda could only move the needle on core inflation from -0.5% to +0.4%.

Quoting the BOJ in their latest “Statement on Monetary Policy” dated 16th June 2017:

The Bank will continue with “Quantitative and Qualitative Monetary Easing (QQE) with Yield Curve Control,” aiming to achieve the price stability target of 2 percent, as long as it is necessary for maintaining that target in a stable manner. It will continue expanding the monetary base until the year-on-year rate of increase in the observed CPI (all items less fresh food) exceeds 2 percent and stays above the target in a stable manner. The Bank will make policy adjustments as appropriate, taking account of developments in economic activity and prices as well as financial conditions, with a view to maintaining the momentum toward achieving the price stability target.

The next problem with the BOJ after attaining inflation rate of 2% is to “stay above the target in a stable manner.” Looking back at core inflation in Japan for the past 10 years showed how difficult this task will be. Every time it rises to 2-3%, it collapses back down to its resting heart rate of 0%. It’s tough being Kuroda.

USD/JPY is declining towards 120 level. 120 acted as both support and resistance several times in the past.

AUD/USD just recently broke above the long standing resistance at 0.7700 and closed near the high of the week. This indicates that buying pressure/momentum is present and chances of it being a fake out is diminished. Waiting for a retracement back down to 0.7700 zone would give a good opportunity to go long this currency pair. Next resistance zone will come in at around 0.9000 and 0.9600.

I have been reading Sun Tzu’s book “The Art of War” and have been very much been captivated by it. This documentary puts his principles into practice.

Personal insight from our analyst in Singapore

Nanyang Technological University, Singapore (NTU) was ranked the world best young university (Top 50 under 50 years old) for the fourth straight year by QS. Currently NTU is ranked 11th globally by QS. Maybe it is time for Singapore universities to gain some recognition at the world stage. Hopefully the day will come when multi-century old Ivy Leagues and Oxbridge will be overtaken / overshadowed by Singapore / Asian universities. Maybe the new President of NTU (ex-President of Carnegie Mellon University) will get us there. Credits to The Straits Times for the image. 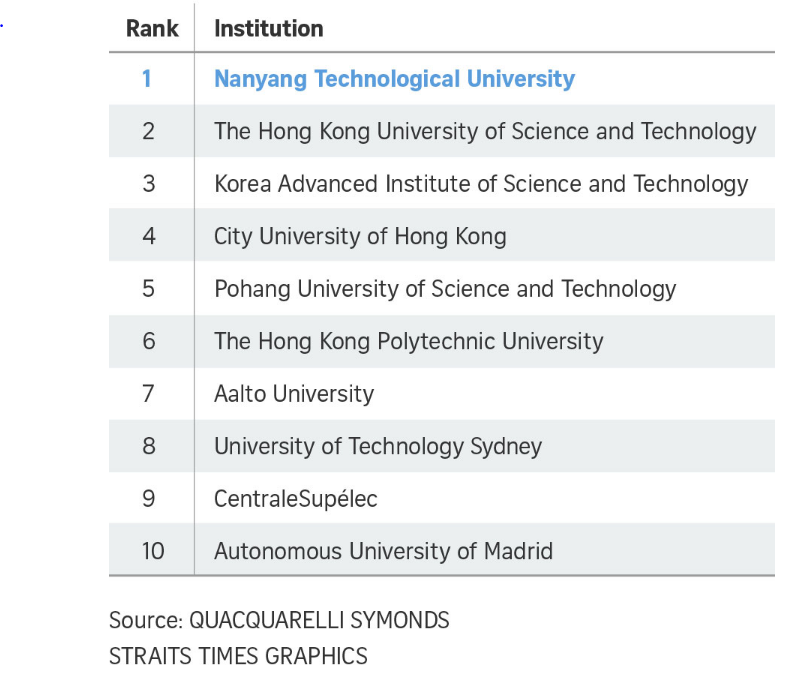