The Week Ahead – Nothing but net

HomeGeopoliticsThe Week Ahead – Nothing but net

The Week Ahead – Nothing but net 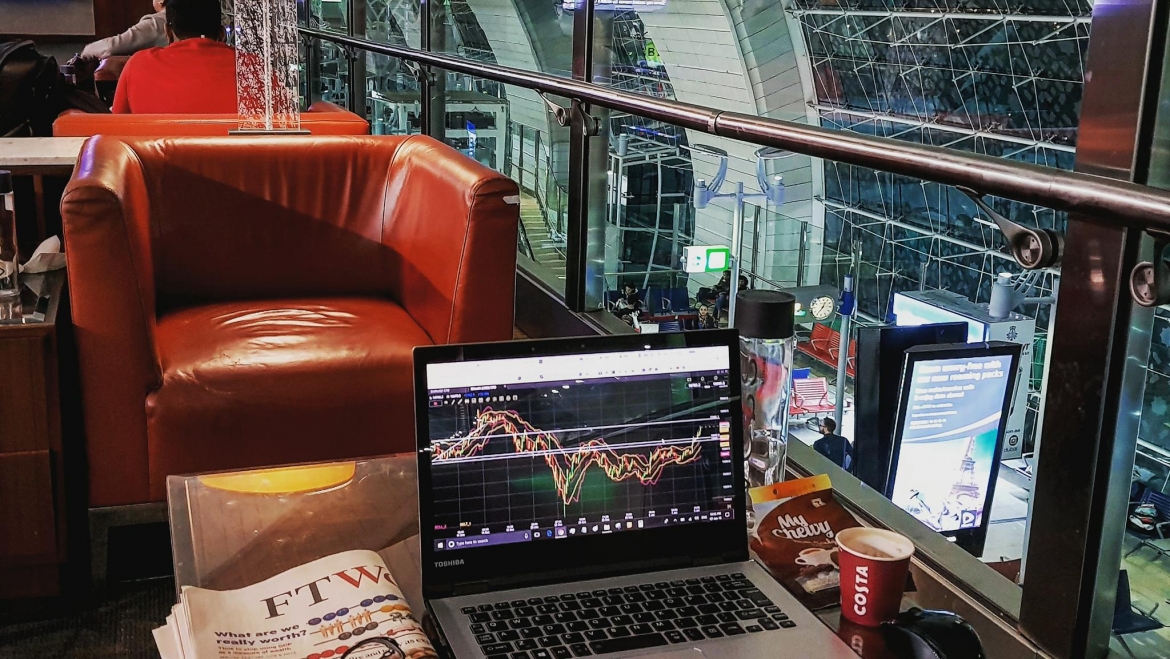 It certainly is a new year yet the pulse of the market remains the same as the indices tears higher. The S&P and Nasdaq breached all time highs at 2700 and 7000 whilst the Dow shattered 25,000. Three record highs in one week and a 14th consecutive green close for the S&P. Though relatively speaking this may just be a quite afternoon in crypto world.

While the equity markets make new highs, the yields on short duration treasuries continue to climb though longer dated yields are fairly stagnant. Spreads between the 10Y and 2Y treasuries are at their 2007 level and the same goes for the 30Y and 10Y spread.

On the other end of the spectrum, the dollar has just ended it’s worst annual performance in a decade. This is when things start to get interesting.

Unlike on your Tinder date.

As far as I can ascertain, the driving sentiment that has kicked off the new year is the implications of tax reform on earnings and the overall economy. After reading excerpts from Michael Wolff’s book I don’t believe the poilicy makers have any idea of it’s implications either. Just buy anything.

Earnings in 2017 increased by 10% while stocks gained roughly 20%. With additional revenue through tax cuts things are looking pretty optimistic. We are however late in the business cycle and things are looking heady. Investor sentiment  from the AAII shows bullishness has increased to 59.75% whilst bears have retreated to 15.6%.

On the economic data front, my favourite leading indicator, the ISM PMI reported 16 out of 18 industries on the rise and New Orders are at their best level since 2004. The weak dollar also boosted exports from 56 to 58.5.

All this optimism naturally brings out the contrarian in me. I am vigilantly searching the horizon for a catalyst but till then remain cautiously long.

1) On the pace of rate hikes: Members are divided. Some want a steeper path of rate hikes, while others want inflation to hit the 2% objective through a flatter trajectory of rate hikes.

Participants discussed several risks that, if realized, could necessitate a steeper path of increases in the target range; these risks included the possibility that inflation pressures could build unduly if output expanded well beyond its maximum sustainable level, perhaps owing to fiscal stimulus or accommodative financial market conditions.

Participants also discussed risks that could lead to a flatter trajectory for the federal funds rate in the medium term, including a failure of actual or expected inflation to move up to the Committee’s 2 percent objective. While participants generally saw the risks to the economic outlook as roughly balanced, they agreed that inflation developments should be monitored closely.

A few participants indicated that they were not comfortable with the degree of additional policy tightening through the end of 2018 implied by the median projections for the federal funds rate in the December SEP. They expressed concern that such a path of increases in the policy rate, while gradual, might prove inconsistent with a sustained return of inflation to 2 percent, or that the level of the federal funds rate might already be near its current neutral value.

A few other participants mentioned that they saw as appropriate a pace of additional policy tightening through the end of 2018 that was somewhat faster than that implied by the December SEP median forecast. They noted that financial conditions had not materially tightened since the removal of monetary policy accommodation began, that continued low interest rates risked financial instability in the future, or that the labor market was increasingly tight.

Meeting participants also discussed the recent narrowing of the gap between the yields on long- and short-maturity nominal Treasury securities, which had resulted in a flatter profile of the term structure of interest rates. Among the factors contributing to the flattening, participants pointed to recent increases in the target range for the federal funds rate, reductions in investors’ estimates of the longer-run neutral real interest rate, lower longer term inflation expectations, and lower term premiums.

They generally agreed that the current degree of flatness of the yield curve was not unusual by historical standards. However, several participants thought that it would be important to continue to monitor the slope of the yield curve. Some expressed concern that a possible future inversion of the yield curve, with short-term yields rising above those on longer-term Treasury securities, could portend an economic slowdown, noting that inversions have preceded recessions over the past several decades, or that a protracted yield curve inversion could adversely affect the financial condition of banks and other financial institutions and pose risks to financial stability.

A couple of other participants viewed the flattening of the yield curve as an expected consequence of increases in the Committee’s target range for the federal funds rate, and judged that a yield curve inversion under such circumstances would not necessarily foreshadow or cause an economic downturn. It was also noted that contacts in the financial sector generally did not express concern about the recent flattening of the term structure.

3) Inflation: They still expect to attain their 2% target eventually. However, urgency to attain their target is implied from their admission that “persistently weak inflation may have led to a decline in longer-term inflation expectations”.

participants generally viewed the medium-term outlook as little changed, and a majority commented that they continued to expect inflation to gradually return to the Committee’s 2 percent longer-run objective.

Due to the persistent shortfall of inflation from the Committee’s 2 percent objective, or the risk that monetary policy could again become constrained by the zero lower bound, a few participants suggested that further study of potential alternative frameworks for the conduct of monetary policy such as price-level targeting or nominal GDP targeting could be useful.

US crude inventories decreased by -7.419 million barrels on the expectation of -4.7 million decrease. Baker Hughes US oil rig count decreased from 747 to 742. Oil production was 9782k barrels per day for week ending 29/12/2017, an increase from 9754k barrels per day in the previous week. Oil production still remains at an all time high. The rise in rig count seemed to be attributed to the strong correlation to the price of oil. Oil production in US is now at an all-time high. The head on battle between US and OPEC continues.

The number of jobs created was below expectations.

The expectation is for core CPI for December to be +1.7%. Continuation of the narrative of sub 2% core inflation.

Strong resistance at 1.20 on EUR/USD. A more hawkish FOMC in 2018 as expounded further below.

The Federal Open Market Committee (FOMC) consists of twelve members–the seven members of the Board of Governors of the Federal Reserve System; the president of the Federal Reserve Bank of New York; and four of the remaining eleven Reserve Bank presidents, who serve one-year terms on a rotating basis. The roating seats are filled from the following four groups of Banks, one Bank president from each group: Boston, Philadelphia, and Richmond; Cleveland and Chicago; Atlanta, St. Louis, and Dallas; and Minneapolis, Kansas City, and San Francisco. Nonvoting Reserve Bank presidents attend the meetings of the Committee, participate in the discussions, and contribute to the Committee’s assessment of the economy and policy options.

Powell is rated as neutral on monetary policy by the Bloomberg Intelligence Fed Spectrometer, compared to Yellen as somewhat dovish. He’s never dissented as a governor, though no board member has done so since 2005. A survey of 30 economists in March found he was slightly more dovish than average Fed central bankers.

“If the economy performs about as expected, I would view it as appropriate to continue to gradually raise rates,” Powell said in a speech in June. “Inflation has been below target for five years and has moved up only slowly toward 2 percent, which argues for continued patience, especially if that progress slows or stalls.”

“Efficiency has to be equally important with safety and soundness in our regulatory responsibilities,”

“We need to achieve safety and soundness, but where we have choices we need to make the most efficient choices.”

To conclude, much depends on the evolution of inflation. If, as many forecasters assume, the current shortfall of inflation from our 2 percent objective indeed proves transitory, further gradual increases in the federal funds rate would be warranted, perhaps along the lines of the median projection from the most recent SEP. But, as I noted earlier, I am concerned that the recent low readings for inflation may be driven by depressed underlying inflation, which would imply a more persistent shortfall in inflation from our objective. In that case, it would be prudent to raise the federal funds rate more gradually. We should have substantially more data in hand in the coming months that will help us make that assessment.

Dudley: Look, I think it’s very clear you don’t want to keep monetary policy too accommodative for too long. This is something that Chair Yellen talked about in her testimony. Because if you do, then you’re going to have to hit the brakes really hard later, move up rates very sharply and that could actually cause the next recession. So slow and gradual seems to me the right way to proceed, moving monetary policy relatively early to make sure the economy doesn’t overheat and that can actually allow you to sustain the economic expansion.

“I‘m still in that place,” Atlanta Fed President Raphael Bostic said of backing a December rate hike. “I‘m going to stay open (minded) but right now I‘m in a place where I‘m comfortable with the notion of continuing to go on our pace of a more balanced monetary policy.”

“I am not as troubled by where inflation is today. There is good reason to believe it is going to come back up,” Mester said at a monetary policy conference at the Cato Institute. Given the depth of the 2007 to 2009 economic shock, she said, an extended period of weak inflation “should not have been unexpected.”

“From today, four rate hikes through the end of next year is still kind of my base view,” Williams told reporters after an economics forecast luncheon. Williams rotates into a voting spot on the Fed’s policy setting panel next year. “We need to get from here to roughly 2.5 percent fed funds rate over the next couple of years.”

The death of the Phillips curve and the flattening of the yield curve.

Bloomberg authored a very insightful article on the flattening of the yield curve and the breakdown in inverse correlation between unemployment rate and inflation rate.

From the December’s FOMC minutes, Neel Kashkari explained his dissenting vote on the rate hike:

“In Mr. Kashkari’s view, while employment growth remained strong, wage growth had not picked up and inflation remained notably below the Committee’s 2 percent target. In addition, the yield curve had flattened as long-term rates had not moved higher even though the Committee raised the federal funds rate target range. He was concerned that the flattening yield curve was partly due to falling longer-term inflation expectations or a lower neutral real rate of interest. He preferred to wait for inflation to move closer to 2 percent on a sustained basis or for inflation expectations to move up before further raising the target range for the federal funds rate.”