The Week Ahead – Marx and Markets

HomeGeopoliticsThe Week Ahead – Marx and Markets

The Week Ahead – Marx and Markets

US crude inventories decreased by -1.53 million barrels on the expectation of -3.1 million drop. Baker Hughes US oil rig count decreased by 1 from 766 to 765. This would be the third decrease in rig count in the past 6 weeks. Has the rig count establishing a top? Oil production was 9430k barrels per day for week ending 14/07/2017, an increase from 9410 barrels per day in the previous week.

The Bank of England kept its bank rate unchanged at 0.25% (vote was 6 to maintain to 2 to increase), £10 billion of corporate bond purchases (unanimous), and £435 billion of government bond purchases (unanimous). Saunders and McCafferty were in the minority hawkish camp that favoured an increase of bank rate. Andrew Haldane, was NATO (No action, talk only) as what I predicted. He voted in favour to keep rates unchanged. So much for his bravado speech that even convinced the great Financial Times to classify him as a hawk (4/5 dove hawk ratio). Words don’t matter in the case of Haldane until he actually votes “increase”. His voting record puts him deep in the dovish camp. Silvana Tenreyro had her first vote on monetary policy for the Bank of England. She did not disappoint the status quo doves. Though reporting on her was woefully lacking, I dug through her voting record while she was at the Bank of Mauritius. It showed that she was a consistent dove. Just like a well-oiled machine, she voted for higher stock prices no increase in bank rates.

Paraphrasing the BOE’s language: We, the Bank of England, are making a very big assumption on all our projections and policies. That assumption is for a “Smooth Brexit”. Tories lost the majority in the recent snap general elections and had to form coalition with the party from Northern Ireland. Despite the weakened bargaining power of Theresa May, we at the BOE still expect a smooth Brexit. Brexit negotiations are nothing but smooth at the moment.

Paraphrasing BOE’s language: If we, the BOE, “attempt” to decrease inflation (via hiking rates), we will (negatively) cause unemployment to increase and income growth to decrease. This “attempt” will have consequences (“cost”) (and therefore we should not attempt to offset inflation).

The tradeoff between unemployment rate and inflation rate is described by the Phillips curve. From the writing above and their oral statements to the press, the language had been that the Bank of England put their 2% inflation target in low regard. Instead, they—through their speeches—have a hard upper bound of 3% and will be willing to tolerate an inflation rate that stays above 2% for extended duration of time (because boosting the sluggish UK GDP growth is more important). GDP growth takes precedence over inflation rate although not explicitly and formally communicated.

Paraphrasing BOE’s language: They gave themselves an out. First, they are saying that despite their projections that GDP will continue to be “sluggish”, if the economy trends in this predicted “sluggish” manner, they will still raise rates and at a pace faster than what the market expects of them. Second, the BOE is saying that the market’s prediction is wrong. The market is saying that the BOE will start raising rates soon. (Past) Actions (by the BOE) speaks louder than words via their statements and interviews. With the BOE MPE filled with doves (6 doves vs 2 hawks and soon to be 7 to 2), their official voting record shows that “MAINTAIN” will be the way to go for the foreseeable future. Also, according to the image below, the market had been wrong about rates. The BOE MPE is more dovish than what the market expected them to be. 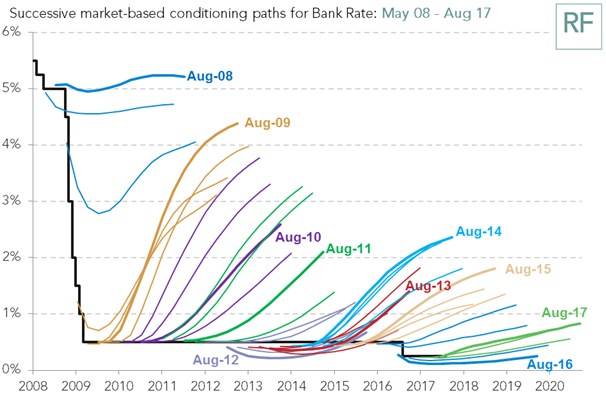 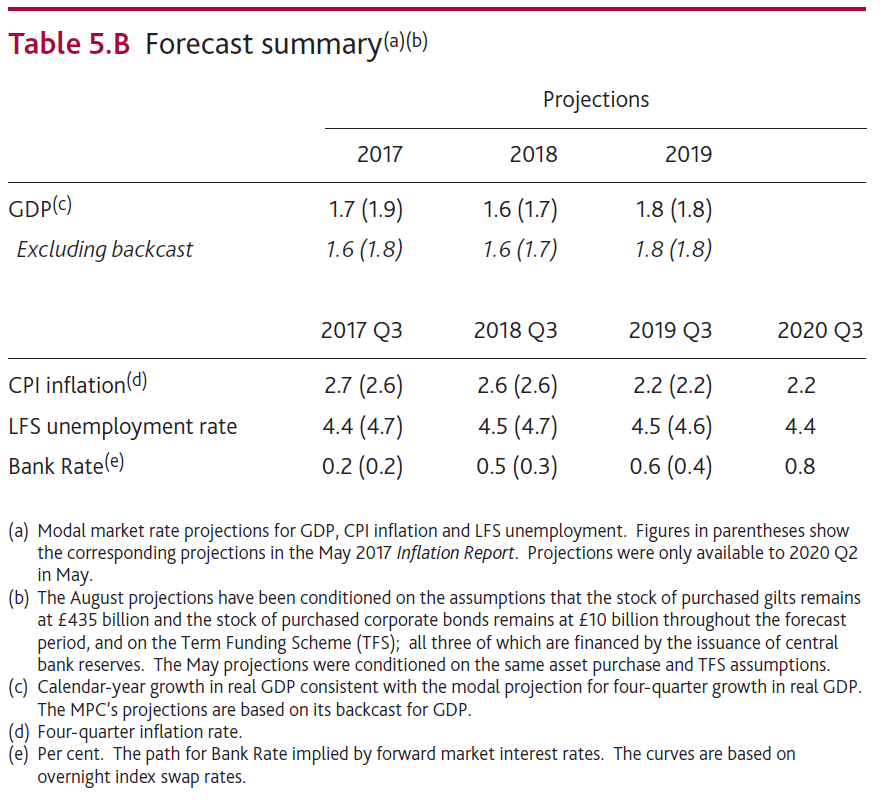 UK GDP growth forecasts was revised downwards (sluggish) in the August’s Inflation Report versus that of May while CPI forecasts stayed relatively the same (>2% target for the next couple years).

Article written by MacroBusiness would give a good summary on the Monetary Policy Statement by the RBA. Nothing burger.

Quoting The Donald @realDonaldTrump: “Excellent Jobs Numbers just released – and I have only just begun. Many job stifling regulations continue to fall. Movement back to USA!”

Inflation in US is trending downwards and further away from Fed’s 2% target. Quoting @ReutersJamie, “US core inflation 1.5% in June. That’s 62 months in a row below the Fed’s 2% target, and 100 months out of 105 months since Lehman.” Well, the Fed is no longer data dependent. A “target” is defined by Oxford Dictionaries as “an objective or result towards which efforts are directed.” 100 out of 105 months off target since Lehman seemed to me that the Fed is either a) woefully incompetent in attaining their goals and/or b) not even directing effort to even try. It begs the question on why they even set a target when they almost never will hit this target on a consistent basis.

Nasdaq-100 is taking support at 5900 which previously was resistance. The bullish narrative goes on.

USDJPY is now testing support trend line at 110 area which is an area of interest for a buying opportunity.

WTI is coming up to resistance. However, inventories in US keep showing a drawdown. However, OPEC compliance had been falling according to Bloomberg survey 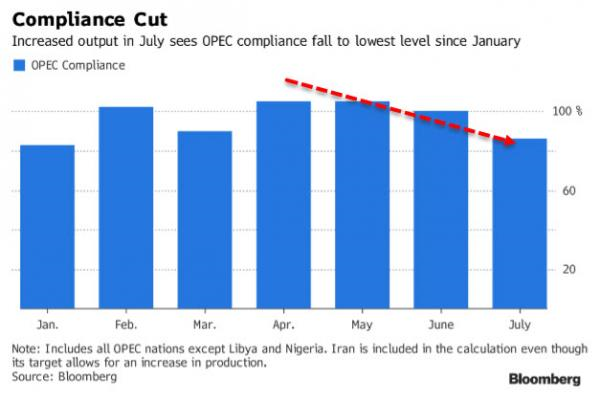 Silver had hit key resistance zone at $17. If by some chance, though slim, there is another opportunity to sell at $17, it would be a good opportunity.

If the Federal Reserve is dead serious in their policy stance of implementing Quantitative Tightening (even if hard economic data had been weak) in September, the US dollar should start to strengthen.

Having just finished reading The Communist Manifesto written by Karl Marx and Friedrich Engels i included some quotes below that may be of interest.