The Week Ahead – Make trade not war

The Week Ahead – Make trade not war 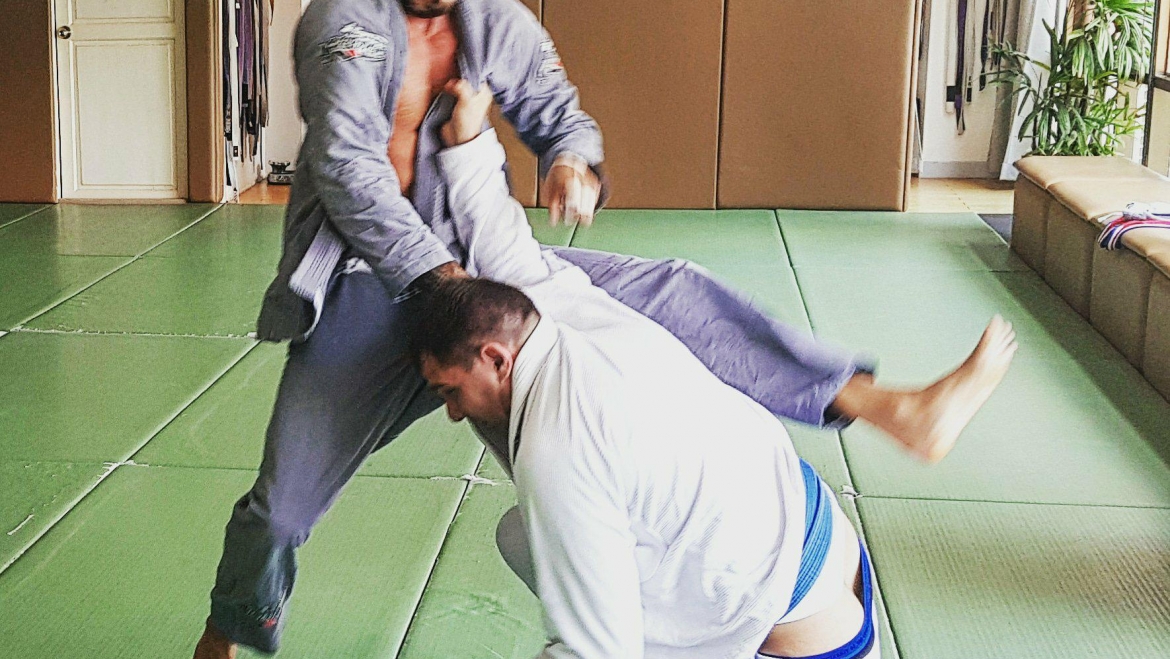 The hard macro data have mostly still been pointing up globally, most notably the ISM’s. Swiss watch exports got off to a very decent start to the year and give a good indication of consumer discretionary spending. The CEO of Audemars  Piguet stated last week inventories were at the lowest level ever. Incidentally, the number of Chinese visitors to Hong Kong hit 4 million in December for the first time since 2014. Another positive development from a macro perspective.

Markets were caught off-guard on Thursday by Trump’s plans to impose tariffs on steel and aluminium imports.The tariffs to which he alluded were both higher than market expectations and destined to come into force earlier than anticipated.

As per the chart below, China accounts for less than 1% of US steel imports whilst Canada has the largest exposure to these round of tariffs. Another reason to add to my short USDCAD thesis which already includes rate differential widening, NAFTA overhang, Canadian oil sand being sold at a 30% discount to spot crude and the largest net speculative long crude position in history. The future does not bode well for the loonie.

I feel it will be important to keep an eye on Trump’s protectionist posturing in the coming weeks. If the threat of further protectionist measures escalates, we can expect a negative impact on global equity markets. 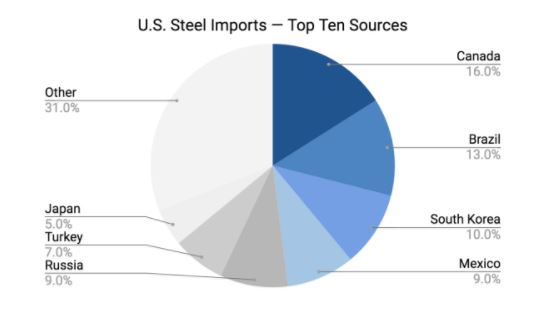 While much of the focus has been on equities, a $60 billion auction of four-week Treasury bills were priced to yield 1.495%, the highest rate since September 2008. Another $22 billion auction of 52-week priced at 2.02%, which is the highest rate since the reintroduction of the 52-week in June 2008. My concern is that increases in consumer spending have been driven primarily by rising household debt levels and that’s getting more expensive.

Sentiment around bonds has been so negative that the Commodity Futures Trading Commission’s weekly Commitment of Trader’s Report for February 20 revealed that Treasury futures short contracts on the 10-year reached over 4x the average and a record high going back to 1992. Thursday the 10-year Treasury yield dropped 6 basis points to 2.8%, the biggest one-day decline since September 5th. We may be seeing a giant short squeeze here.

US crude inventories INCREASED by +3.02 million barrels on the expectation of +3 million increase. Baker Hughes US oil rig count increased by 1 from 799 to 800. Oil production was 10283k barrels per day for week ending 23/02/2018, an increase from 10270k barrels per day in the previous week. US Oil production still remains at / near all time and have just overtaken Saudi Arabia and is expected to overtake Russia in due time. The rise in rig count is attributed to the strong correlation to the price of oil. The head on battle between US and OPEC continues. Frackers are churning out their rigs while OPEC is keeping a lid on production. 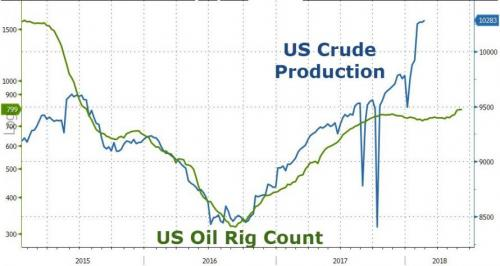 Year on Year Core PCE price index, the Federal Reserve’s preferred inflation measure rose +1.5% in January. This will be the third straight month whereby it stayed exactly at +1.5%. Quoting from the most recent Fed minutes: “Almost all participants continued to anticipate that inflation would move up to the Committee’s 2 percent objective over the medium term as economic growth remained above trend and the labor market stayed strong”. Since the Great Recession, there were only 5 occasions whereby the reading was at or above the Federal Reserve’s 2% target. With the Federal Reserve engaged in tightening their monetary policy and them having a consistent track record of not attaining their 2% target over the last decade, their 2% target is just a pipe dream.

Trump’s protectionism agenda resurfaced last week with him slapping a 25% and 10% tariff on steel and aluminium imports respectively. Mainstream media’s talking heads for the entire of last week vehemently opposed Trump’s trade wars. The same talking heads also failed to realise that entire manufacturing industries (in the Brexit states (Wisconsin, Ohio, Pennsylvania, Michigan) and others) were decimated because American manufacturers were unable to compete with their foreign competitors. From pulling out of Obama’s Trans Pacific Partnership and Paris Climate Agreement to slashing the corporate tax rate permanently from 35% to 21%, and now to igniting a trade war, Trump continues to deliver on his promise to revive America’s manufacturing industry. Even if he eventually fails to bring about a revival in the manufacturing industry, his voters will give him props for trying. America will not return to the Golden Ages of Rockefeller’s Standard Oil or Carnegie’s US Steel. But at a minimum, Trump is trying. And that counts for something, at least to his voters. The ISM Manufacturing PMI at 60.8 for month of February 2018 is tied highest since 2011. The talking heads on the mainstream media are now talking about a “Blue Wave” whereby the Democrats will make large gains and retake control of the House of Representatives and to a smaller extent the Senate. They are still in their old way of thinking. The country after 8 years of status quo policies of Obama, whose 2008 presidential campaign slogan ironically was “CHANGE WE CAN BELIEVE IN” wants change and Trump promised and have consistently delivered change. 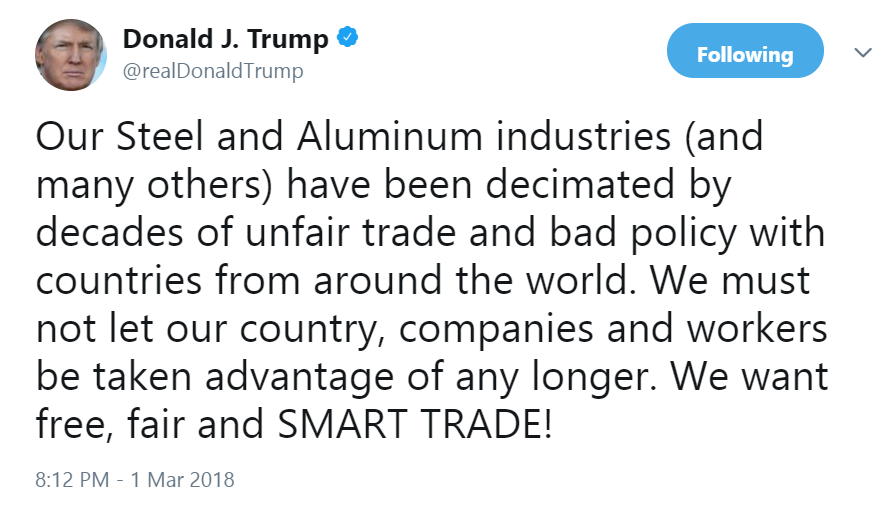 Nothing burger. Weak inflation. Cash rate to stay unchanged at +1.50%.

No change in rates and QE programme is expected. However as always, the language is most important. Hints of how the schedule of ECB’s exit from their QE programe is most paramount. In month of February 2018, Eurozone inflation at +1.2% continued to trend lower and further from the ECB’s 2% target. Given that inflation is trending in the wrong direction away from ECB’s 2% target, a dovish Draghi is to be expected?

To refresh one’s memory on what the ECB says about QE and inflation (or the lack of), here is the quote from their latest (and every) press release of their monetary policy decision. “Regarding non-standard monetary policy measures, the Governing Council confirms that the net asset purchases, at the new monthly pace of €30 billion, are intended to run until the end of September 2018, or beyond, if necessary, and in any case until the Governing Council sees a sustained adjustment in the path of inflation consistent with its inflation aim. If the outlook becomes less favourable, or if financial conditions become inconsistent with further progress towards a sustained adjustment in the path of inflation, the Governing Council stands ready to increase the asset purchase programme (APP) in terms of size and/or duration.” Their inflation target is as follows: “The primary objective of the ECB’s monetary policy is to maintain price stability. The ECB aims at inflation rates of below, but close to, 2% over the medium term.”

What do π, e and ECB’s 2% inflation target have in common? They’re all irrational numbers.

As with the rest of the developed world, inflation is the word. In the context of Japan, the number is +0.9% (core inflation rate for January 2018). No change in policy and language is expected out of the Bank of Japan.

In Governor Kuorda’s most recent speech to the Japanese Parliament, he continued his / the BOJ rhetoric that inflation are rising and their policies are working. Quoting Bloomberg: “”Right now, the members of the policy board and I think that prices will move to reach 2 percent in around fiscal 2019. So it’s logical that we would be thinking about and debating exit at that time too,” he said. “I’m not saying that the negative rate of 0.1 percent and the around 0 percent aim for 10-year bond yields will never change, but it is possible. We will be discussing that at each policy meeting.””

However Kuroda’s colleague, Kataoka, an uber-dove, had pushed and continued to push for looser monetary policy. If you are bored, reading the entirety of Kataoka’s speech will be worth your time and effort.

Quoting Kataoka with regards to his proposed changes to the current monetary policies:

“On the basis of such understanding, I believe that further monetary easing is necessary to achieve the price stability target at an early stage. Specifically, the Bank should purchase JGBs so that yields on JGBs with maturities of 10 years and longer will broadly be lowered further. With a view to reinforcing the inflation-overshooting commitment, the Bank should also add the commitment that, in terms of the medians of the Policy Board members’ forecasts presented in the Outlook Report, if there is a delay in the timing of achieving the price stability target due to domestic factors, the Bank should take additional easing measures.

Strengthening of the inflation-overshooting commitment aims at increasing the transmission effects of higher inflation expectations on the observed inflation rate — in other words, increasing the effects through the third and fourth transmission channels. The rise in inflation expectations from 2013 was attributable to the Bank’s decision to introduce an inflation targeting policy. It also was attributable to the initiatives taken to achieve the policy; the Bank announced the strengthening of policy coordination with the government by releasing the joint statement, and the two entities have taken concrete actions by implementing flexible fiscal policy and bold monetary policy as well as the growth strategy. In order to influence inflation expectations, it is essential that policy coordination with the government aiming at achieving the price stability target be firmly ensured through both entities’ concrete actions. The Bank, for its part, should further promote powerful monetary easing backed by a clear and strong commitment to achieving the price stability target.”

204K jobs is the consensus expectation for the number of jobs created in February 2018. Unemployment rate is to drop another tenth of a percentage point from +4.1% to +4.0%. YoY average hourly earnings is to increase by +2.8%.