The Week Ahead – Loss Aversion

The Week Ahead – Loss Aversion 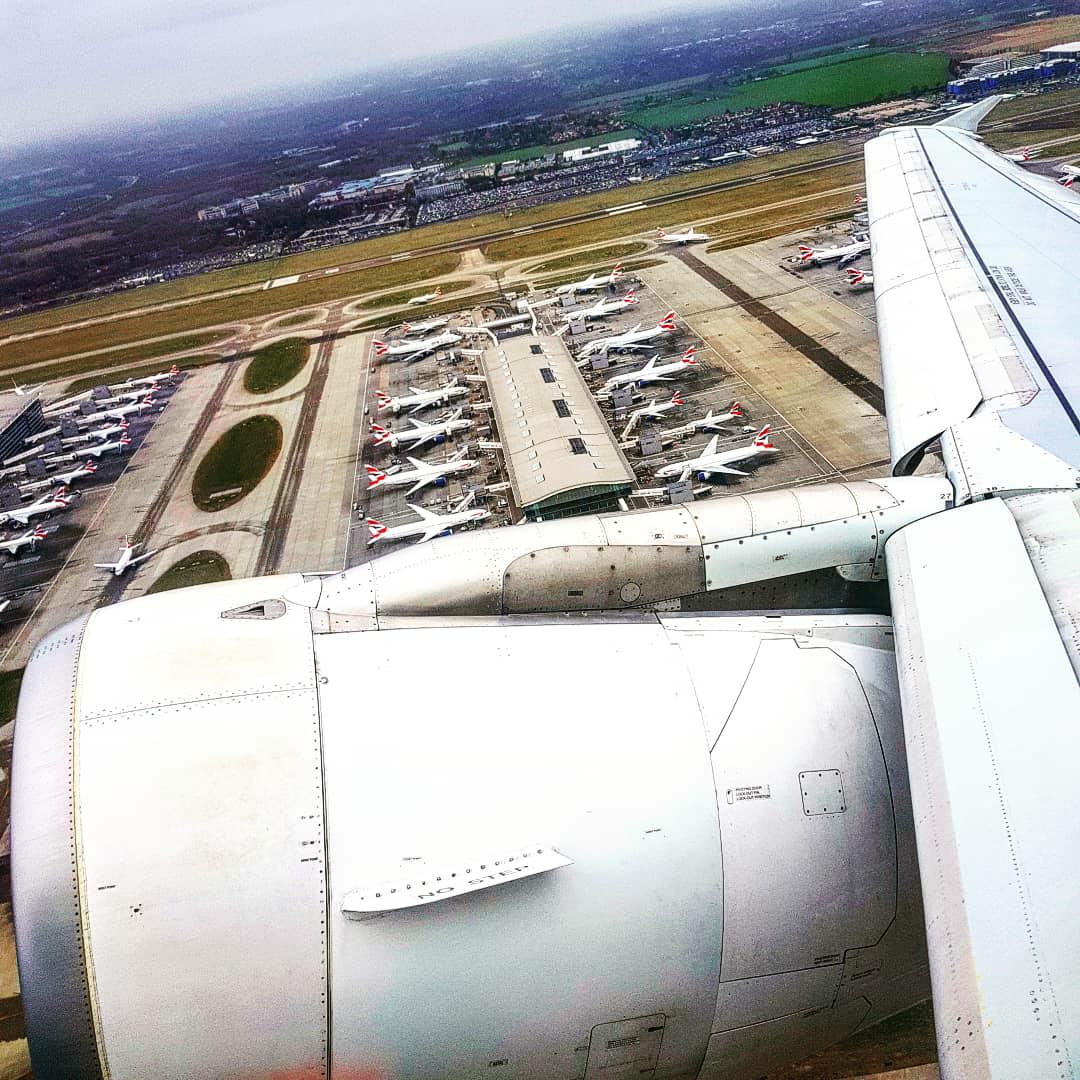 As I write this, some 30,000 ft above the Atlantic I can’t help but contemplate risk and loss. I’ve marked a few chapters of “Thinking Fast & Slow” by Kaheman and Twersky which I try to re-read at this time of the year to remind myself of my own evolutionary misdoings. The power of the kindle.

Loss aversion is one of the most important concepts in behavioral economics and thus trading psychology. “Losses loom greater than gains” is how Daniel Kahneman and Amos Twersky put it in their well known paper arguing that much of our financial behavior is driven by this concept.  https://www.princeton.edu/~kahneman/docs/Publications/Anomalies_DK_JLK_RHT_1991.pdf

Recent studies show that loss aversion dictates far more of our actions than just financial decisions. Our choice in partner’s for example. We aren’t looking for the ideal partner rather we are looking for “deal breakers” in the search for a partner. Put differently, we aren’t looking for that prince/princess but rather the assurance that there is no frog/pig in there.

In trading terms, we don’t want to profit but rather we are looking not to lose. Think about that, we are programmed to avoid losses at the expense of massive potential gains. Trading is about asymmetric risk to reward gains. The average person has lost before they have even started.

We fear to lose and thus take actions that increase our chance of losing. In trading, in life, in relationships. The fear of possible regret drowns out opportunity of real gain.

Much of this current bull market has unfolded during the weakest economic recovery in history. Now that economic conditions are improving most seem to forget that the market is already pretty hot. Of the 17 trading days of 2018, the market closed at a new record high 12 times. The best start to the year since 1987. Technically, the steepening upward move is a text book case for a market blow off. Sadly there aren’t any text books that cover this kind of economic environment. Total market capitalization as a percentage of GDP has also reached all time highs. Even higher than the dotcom boom. Not a useful metric to measure directional change but it does illustrate how highly priced equities have become.

No change in monetary policy as expected with uber-dove Kataoka dissenting. However, the details are massively crucial. The main take away from this meeting is this: THE BOJ SHIP IS ON CRUISE CONTROL. THERE IS NO NEED TO ROCK THE BOAT. 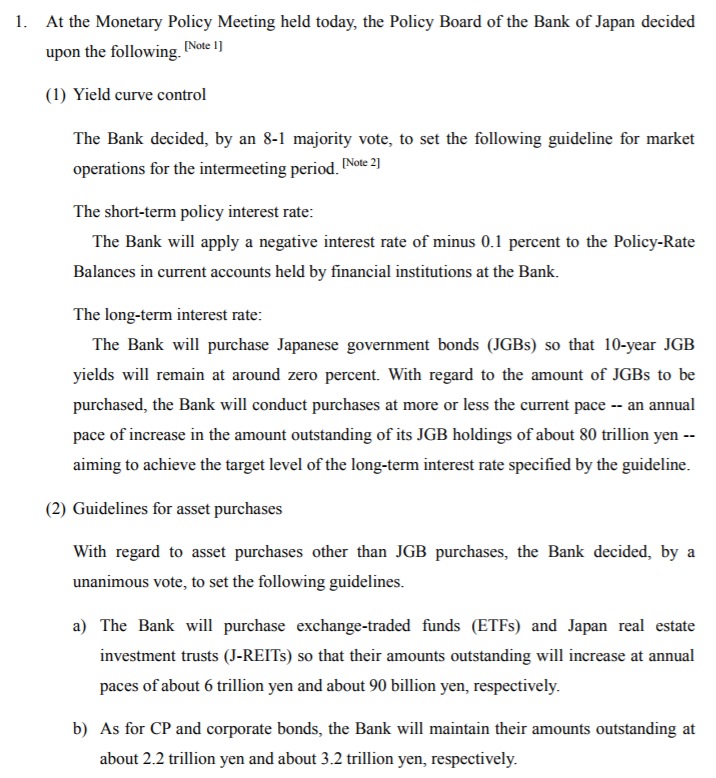 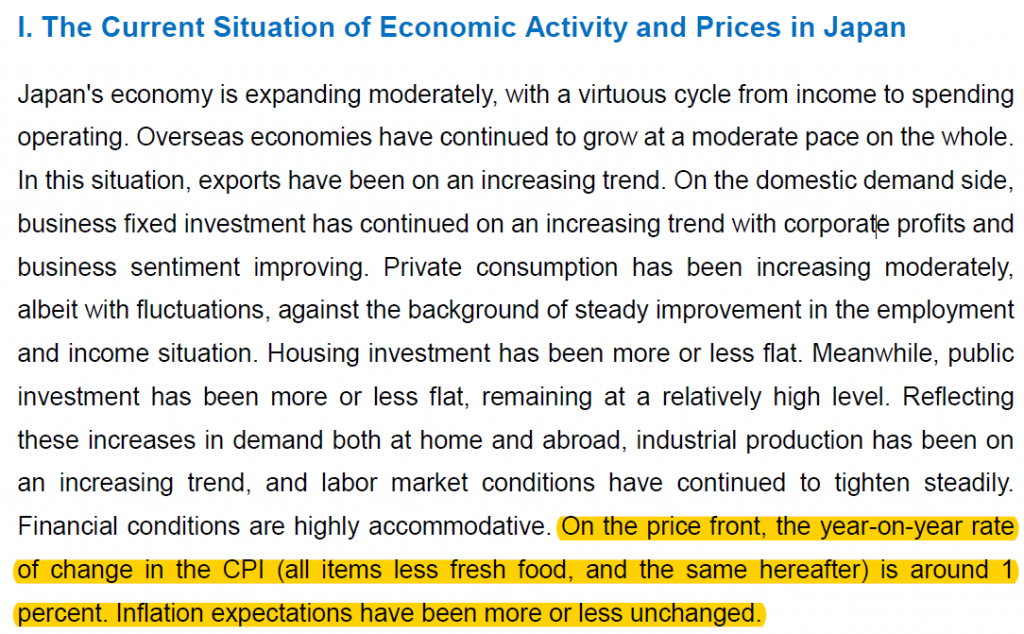 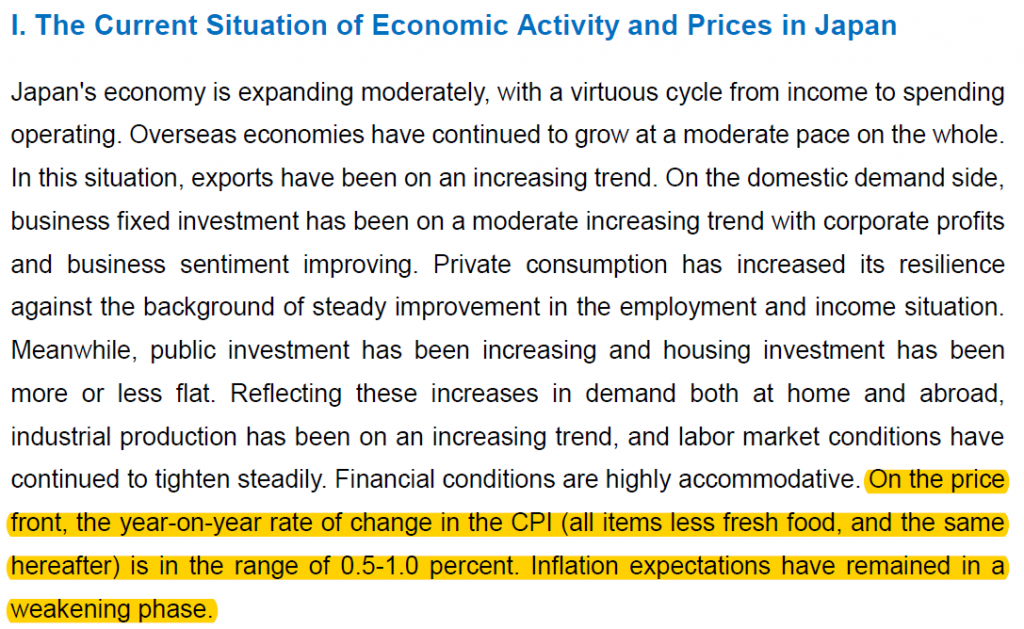 The members of the BOJ did not make much changes to their inflation forecasts. The central bank is still predicting that their 2% core inflation target (with the help of the consumption tax) will be attained in FY 2019. If the effects of the consumption tax was not included in their forecasts, the 2% core inflation target will not be reached in FY 2019. The only change in the inflation forecast would be a tightening of the range of FY 2018 from 1.1% to 1.6% in October 2017 to 1.3% to 1.6% in January 2018.

BOJ inflation dot plot: Even though core CPI forecasts were relatively unchanged from October 2017 to January 2018, there were a slight increase in downside risk for FY 2018 and FY 2019. 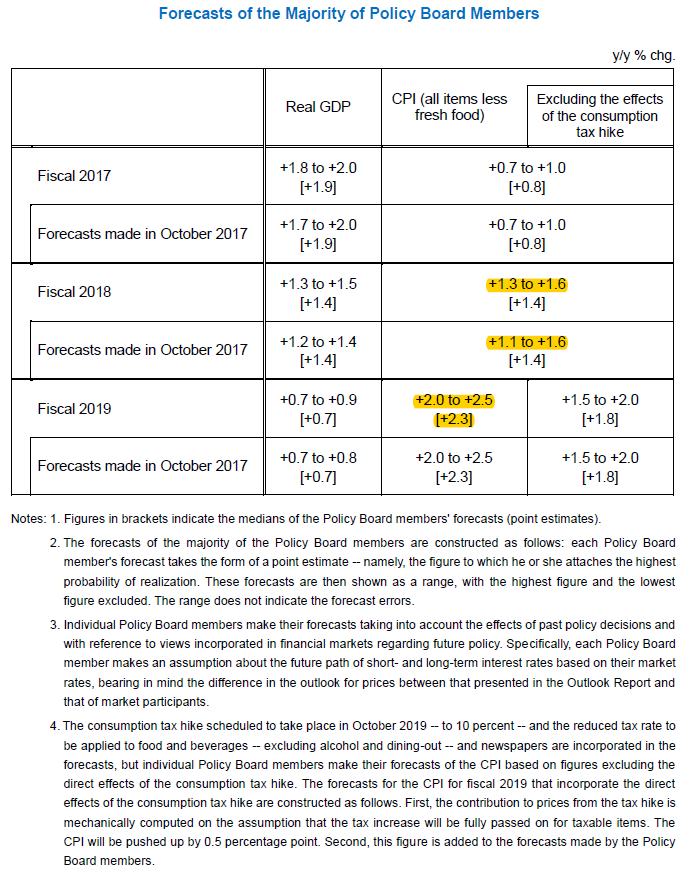 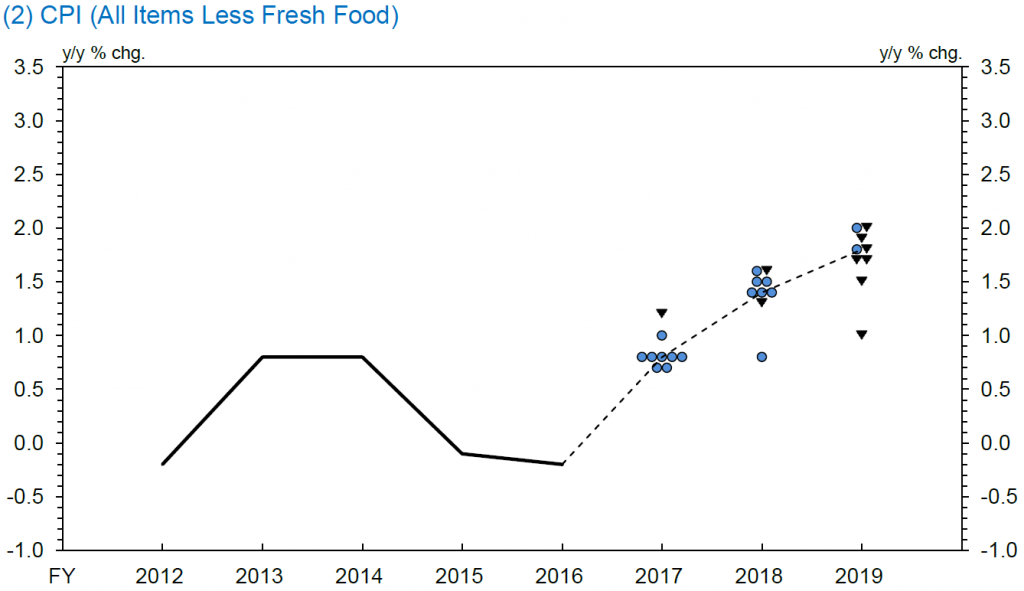 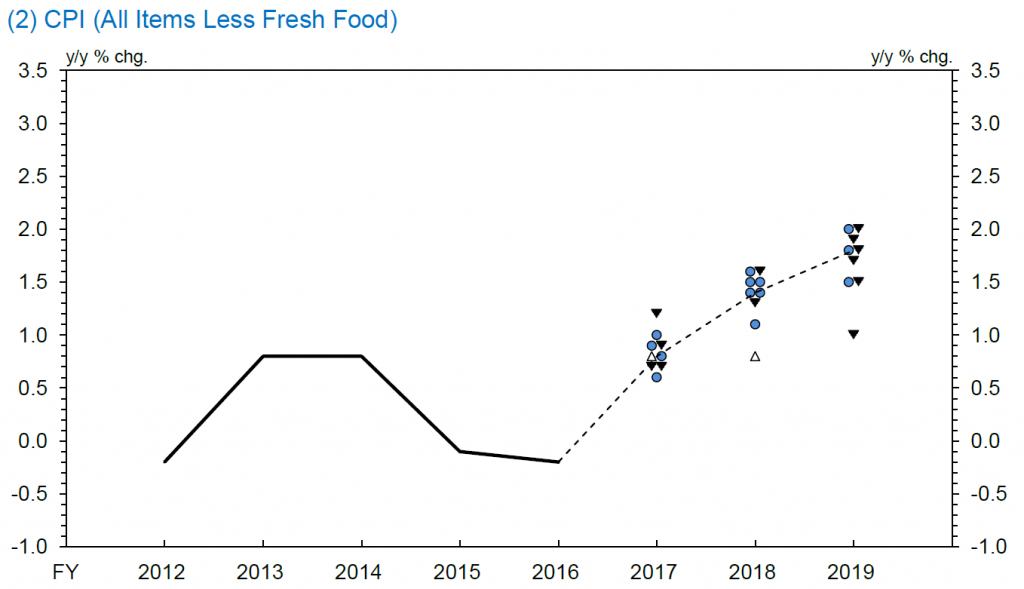 Goldman Sachs made a great summary on the main points from the press conference. The main message from Governor Kuroda was that THE BOJ SHIP IS ON CRUISE CONTROL. THERE IS NO NEED TO ROCK THE BOAT.

Steven Terner Mnuchin opened his mouth and words came out

“A weaker dollar is good for us as it relates to trade and opportunities.”

US crude inventories decreased by -1.07 million barrels on the expectation of -2.32 million decrease. This represents 10 straight weeks of drawdowns in crude oil inventories. Baker Hughes US oil rig count increased by 12 from 747 to 759. Oil production was 9878k barrels per day for week ending 19/01/2018, an increase from 9750k barrels per day in the previous week. Oil production still remains at / near all time high. The rise in rig count seemed to be attributed to the strong correlation to the price of oil. The head on battle between US and OPEC continues. Frackers are churning out their rigs while OPEC is keeping a lid on production. 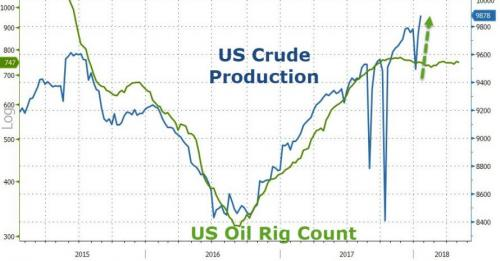 Japan’s core CPI y/y rose by +0.9% in December, which is the same as that of November’s. Has the rally in core CPI ended or will it continue its upward trajectory?

No change as expected. “If the outlook becomes less favourable, or if financial conditions become inconsistent with further progress towards a sustained adjustment in the path of inflation, the Governing Council stands ready to increase the asset purchase programme (APP) in terms of size and/or duration.” 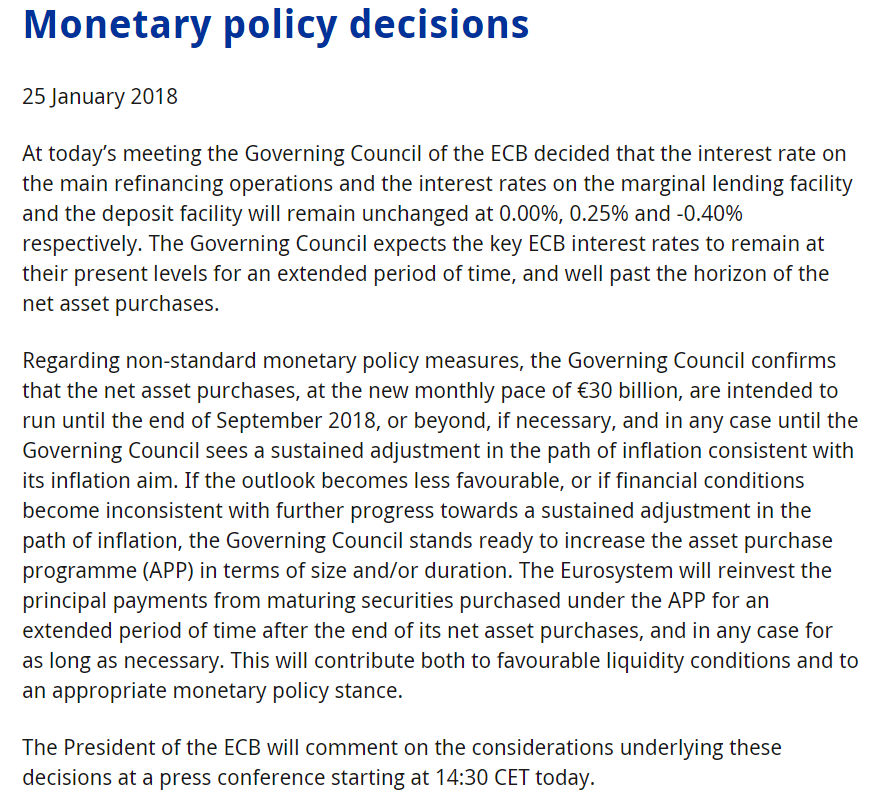 Answer: The only discussion that took place was about the need to have a discussion. You see, my press conference went in – started going to the substance. But the actual discussion in the Governing Council was only scheduling the discussion which was to take place in the early part of this year. Well, now, that’s important to clarify.

So discussion hasn’t really started. We really went through the events since October to now and trying to basically assess whether something has changed. There hasn’t been much of a change other than a continuing strengthening of the economy more – to some extent even more – than expected. Now, we have as I said downside risks relating primarily to geopolitical and especially foreign exchange markets. By and large, the risks to growth are balanced. Now, can we declare victory? The answer is no, not yet. Price pressures are muted, underlying inflation still doesn’t show signs of any convincing upward movements. Price pressures along the pricing chain remain broadly stable and subdued. Recent data on wage growth confirms some lift-off] from its lows of 2016 second quarter, but it’s a lift-off so far mostly due to wage drift, not negotiated wages. We have to look better and see whether this picks up and is confirmed.

Q4 US annualized GDP missed expectations. Its came in at 2.6% when expectations was for 3.0%. 1.2%, 3.1%, 3.2% 2.6% are the annualized growth rate for the four quarters in 2017. We can give Trump a pass for his weak first quarter growth. That quarter’s first 20 days was under Obama and Trump needed time to implement his economic plan. Credit is given where credit is due. Q2,3,4 have been stellar for Trump. No doubt about that.

Another draw in inventories? My hunch tells me that the rebalancing is about to be completed and frackers are going to ramp up production bigly now that USOIL is above $60 a barrel, well in the profitable territory.

184K jobs expected to be created in January. Unemployment rate to remain at 4.1%. 0.3% month over month growth of hourly earnings expected. 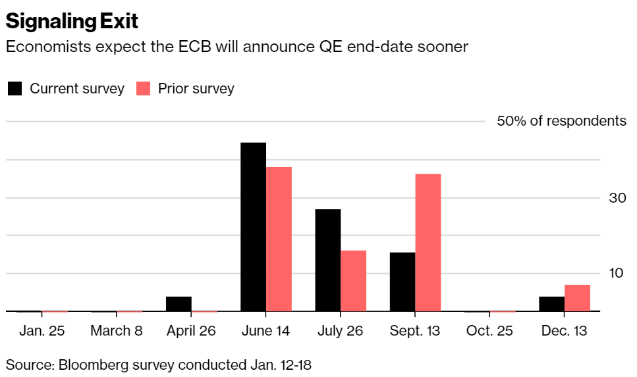 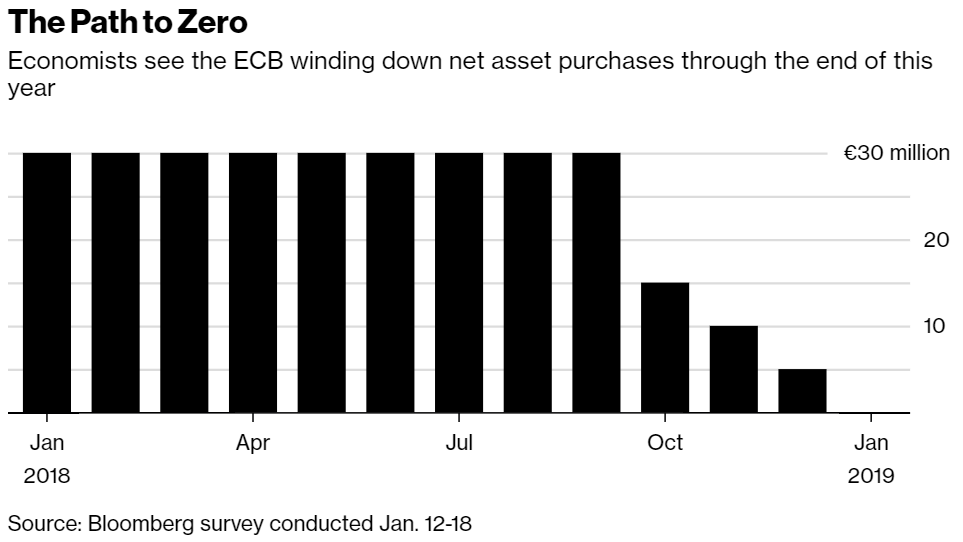