The Week Ahead – Long Kiwi

The Week Ahead – Long Kiwi

US crude inventories decreased by -6.45 million barrels on the expectation of -2.2 million drop. Baker Hughes US oil rig count increased by 3 from 765 to 768. This would be the third decrease in rig count in the past 6 weeks. Is the rig count establishing a top? Oil production was 9423k barrels per day for week ending 14/07/2017, a decrease from 9430 barrels per day in the previous week. The slight drop in production was mainly due to decrease in production in Alaska which outweighed the increase in the Lower 48 states.

The Reserve Bank of New Zealand decided to leave the Official Cash Rate (OCR) unchanged at +1.75%. The RBNZ still sees the need to maintain its accommodative monetary policy because inflation and growth remains weak. The reason for them being weak is because global inflation and growth had been weak. New Zealand is a small and open economy (like Singapore) and is beholden to its trading partners and external factors. The RBNZ, realizing that its currency had strengthened (mainly against the US Dollar), wants its currency to be weakened. However, despite wanting a weaker currency, they refused to act and gave no hints that they will act in the future should their currency continues to rise on the back of depreciating US Dollar.

UK CPI was +2.6% in June. Continued decrease in CPI will make it almost definite that rate hike by BOE MPE is off the table.

Probably nothing since July FOMC meeting was a nothing burger.

NZD/USD having broken out from resistance zone at 0.73 is now retesting it to see if support holds.

1) With the ongoing beef between the two most egoistical men (Trump and Kim), the US Dollar had been under pressure.

2) The probability of rate hike by December 2017 currently stands at 36.7% (0% for September and November). It made a high of around 46% some time last week and then it dropped 10% in quick order in response to heightened tensions between US and the DPRK and weak CPI data out of US.

1) Divergent monetary policy between the Federal Reserve in the US and RBNZ in New Zealand. The Fed is steadfast in its resolve to hike rates and initiate Quantitative Tightening. On the contrary, the RBNZ intends to keep interest rates accommodative for extended durations of time because growth and inflation are still weak. 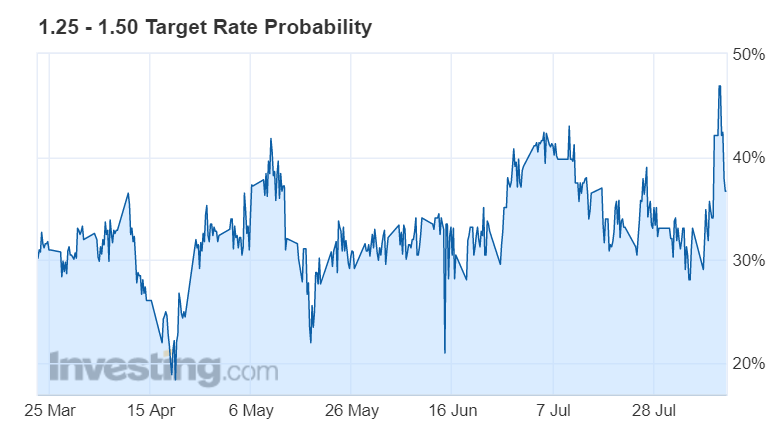 However, macroeconomic data out of US in recent times had not been the best. Also, the recent war of words between Trump and Kim had led to safe havens like the Japanese Yen to be bought. The lack of inflation in Japan may not be all that bad for the Japanese economy. This point of view was argued by Noah Smith on Bloomberg View and is a very good read.