The Week Ahead – Long kiwi and cable

The Week Ahead – Long kiwi and cable

The UK third quarter GDP q/q came in at +0.4%, beating the consensus of +0.3%. On a year on year basis, GDP grew +1.5%. A stronger than expected economic growth rate adds to the narrative of a rate hike by the Bank of England next week.

The Bank of Canada decided not to hike interest rates and stay pat at 1.00%. Last Friday’s weak CPI and core retail sales figures out of Canada should give the central bank pause in their tightening of monetary policy.

Summary : The Bank of Canada thinks that inflation currently at +1.6% will move back up to 2% by the second half of 2018, which is slower than expected. The reason for this decreased pace is due to the strength of its currency. Economic growth is close to full potential but is subject to “substantial uncertainty about geopolitical developments and fiscal and trade policies, notably the renegotiation of the North American Free Trade Agreement.” There is still slack in the labour market.

US crude inventories increased by +0.856 million barrels on the expectation of -3 million decrease. Baker Hughes US oil rig count increased by 1 from 736 to 736. Oil production was 9507 barrels per day for week ending 20/10/2017, an increase from 8406 barrels per day in the previous week. This recovery in oil production is because refineries were turned back on after Hurricane Nate.

“The interest rate on the main refinancing operations and the interest rates on the marginal lending facility and the deposit facility will remain unchanged at 0.00%, 0.25% and -0.40% respectively.”

From January 2018 the net asset purchases are intended to continue at a monthly pace of €30 billion until the end of September 2018.”

Taken from Zerohedge detailing the key headlines from Mario Draghi’s statement and Q&A:

President Trump delivers again. Q3 GDP q/q came in at a whopping +3.0% in its first estimate. However, apparently the impact of the hurricanes were not taken into account by the BEA.

“These impacts on production are included, but not separately identified, in the source data that BEA uses to prepare the estimates of GDP; consequently, it is not possible to estimate the overall impact of Hurricanes Harvey and Irma on 2017 third quarter GDP.”

Though the members of the BOJ is now more dovish than before (9 doves and 0 hawks), no change in monetary is expected. This is because inflation rate in Japan seemed to be creeping back up, implying that there is some success in the policies they implemented with regards to defeating deflation / disinflation. September 2017’s core inflation y/y was +0.7%, matching the number in August. Inflation in Japan have improved greatly ever since it hit a low in September 2016 at -0.5%. That is an increase in inflation rate of 1.2% in 12 months.

No doubt the current policies have gotten inflation up by 1.2%. However, it is still 1.3% away from the 2% target. The question to ask is: Are the current policies sufficiently effective for this trend in inflation to continue to rise to 2%? And if so, will inflation be sustained at 2% and not be one of the past times where it belly flopped and collapsed back down to zero? If not, should the BOJ start to consider further loosening its monetary policies?

Consensus is for 9 votes in favour of a rate increase from +0.25% to +0.50%. As written extensively previously, there is enough votes (5/9) in order for a rate increase. As Mark Carney puts it, the BOE is “just easing off the accelerator”.

Consensus is for a whopping 311k jobs created in September.

Looking at the 10 year chart of UK’s inflation, is it not inconceivable that inflation will rise up to 5%? Quoting the Bank of England from monetary policy statement dated 14 September 2017: “Headline and core CPI inflation in August were slightly higher than anticipated.  Twelve-month CPI inflation rose to 2.9% and is now expected to rise to above 3% in October.” And yes, it did hit 3.0% in September.

Fed’s rate hike odds is now at 97.8% for December’s meeting. Basically a rate hike in December has already been priced in. But, the issue is whether there is a chance of a surprise from the Fed by them choosing to stand pat and not hiking in December. This is especially so when September’s CPI was another miss and also when the Fed mentioned that low inflation may be due to persistent factors too. 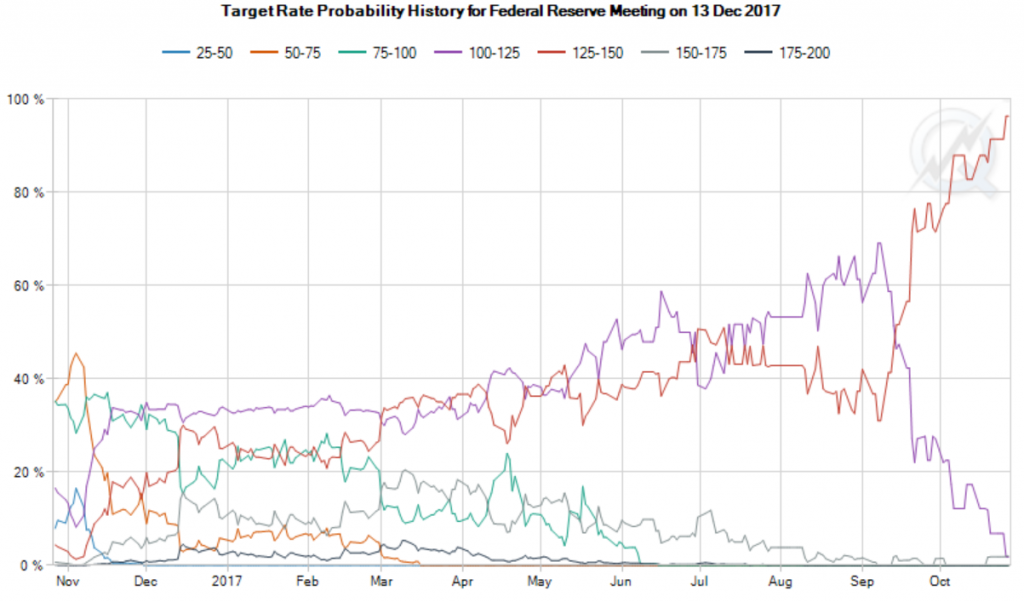