The Week Ahead – Flattening yield curve and XAG

The Week Ahead – Flattening yield curve and XAG

Via Reuters: “OPEC and non-OPEC producers led by Russia agreed on Thursday to extend oil output cuts until the end of 2018 as they try to finish clearing a global glut of crude while signaling a possible early exit from the deal if the market overheats.”

Another miss by the Fed on their 2% core PCE target. Core PCE for the month of October was +1.4%. It is still very far off from their 2% target. Note that stable prices is the Fed’s second mandate. They have two mandates, and not one. Maybe they have forgotten about the second mandate. Who knows? Since the recession, core PCE have been at or above 2% on five occasions. Well I suppose that missing their target since 2009 is their definition of “idiosyncratic and transitory factors”.

Most of the gains in price rises have been attributed to price rises in electricity and city gas. Still a long way for the BOJ to their 2% core CPI target.

US crude inventories decreased by -3.43 million barrels on the expectation of -2.95 million decrease. Baker Hughes US oil rig count increased by 2 from 747 to 749. Oil production was 9682k barrels per day for week ending 24/11/2017, an increase from 9658k barrels per day in the previous week, pushing all time high production rate higher. The rise in rig count seemed to be attributed to the strong correlation to the price of oil. Oil production in US is now at an all-time high. The head on battle between US and OPEC continues.

Mr Kim and his man toys

Mr Kim fired another rocket, the Hwasong-15. This time around, their rocket can essentially hit anywhere on continental America. In the words of Vladimir Vladimirovich Putin, “North Koreans … would rather eat grass than to give up on their nuclear programme unless they feel safe.” In response to Mr Kim’s missile test, Mr Trump replied with his increased tweet length of 480 characters and said this: “The Chinese Envoy, who just returned from North Korea, seems to have had no impact on Little Rocket Man. Hard to believe his people, and the military, put up with living in such horrible conditions. Russia and China condemned the launch.” 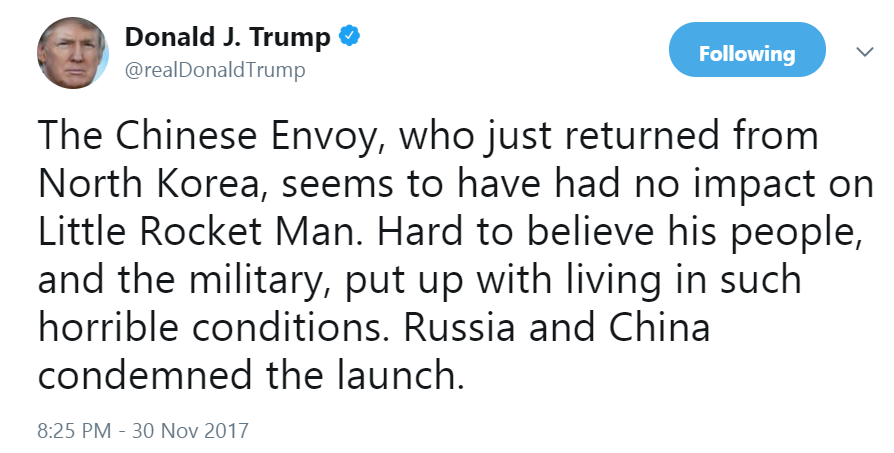 The House of Representatives passed its tax bill with 227 yeas and 205 nays.

The real battle all along resides in the upper chamber; the Senate. The Senate passed the Tax Cuts and Jobs Act with 51 Yeas and 49 Nays, almost along party lines. The only nay vote from the republicans came from Bob Cockster Cocker Corker from the Great State of Tennessee. He said he will not vote for a tax plan that “add[s] one penny to the deficit.” He set the bar so immensely high for GOP senate leadership to meet such that he became irrelevant. His pride and vengeful attitude towards President Trump will be his downfall in the political scene. Even moderates Murkowski and Collins from Alaska and Maine eventually became yea votes. Bob Cockster Cocker Corker who is no longer running for reelection will soon be forgotten and abandoned by the Grand Old Party (just like how President Barack Hussein Obama II is going to be forgotten as Trump unwinds his legacy one policy at a time (TPP, Obamacare now via repealing its individual mandate, Paris climate deal). Obama will be remembered in the annals of history as the first American black president, and that’s about it. How’s that for eight years of presidency. He couldn’t get Garland to replace Scalia in the Supreme Court with one year left in his presidency and gain 5-4 edge.)

Now that both houses of congress have passed their version of the tax bill, the two tax bills will now need to be reconciled and the final bill will probably be on President Donald John Trump’s desk by Christmas. 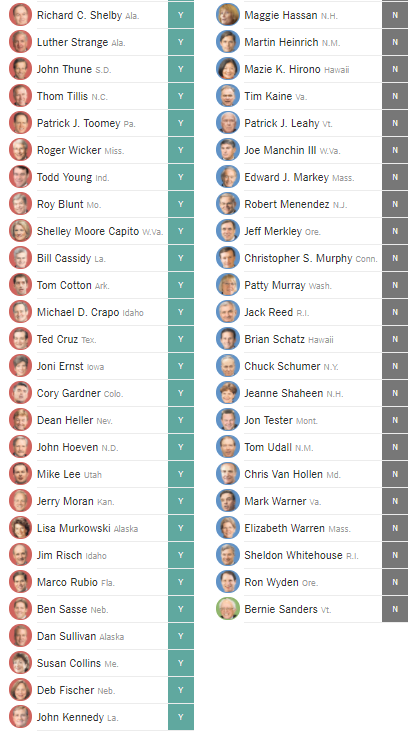 The betting market thinks that corporate tax cut will be done by 2017. PredictIt is putting the odds at 85% of it happening. 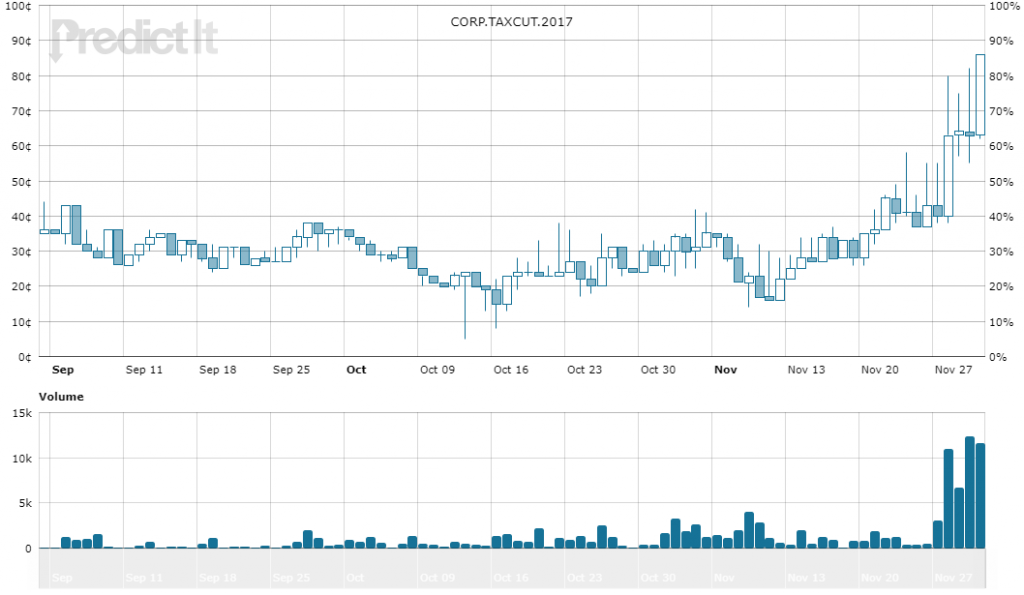 The betting market thinks that corporate tax cut will be done by 2017. PredictIt is putting the odds at 35% of it happening. Which seems incongruent with that of corporate tax. 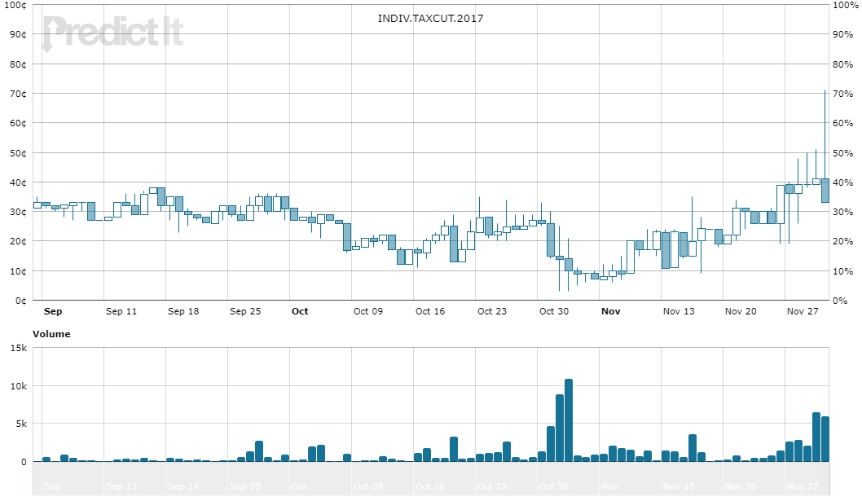 No change in cash rate of +1.50% is expected. However, the language of the central bank will be key. Will they hint of a potential cut in interest rate given the fact they have not been successful in generating inflation?

Last week’s Canadian data came out very strong. Language by the central bank in Canada will be key. They may hint of a potential rate hike in the near future.

Expectation are for 4.1% unemployment rate (unchanged), 200k jobs created, and 0.3% increase in average hourly earnings. A rebound from the transitional weakening of the labour market due to Jeff Bezos the multiple hurricanes that hit the United States.

The flattening of the yield curve have been pretty pronounced. Yet, the price of precious metals continue to fall. The reason for the recent fall in price of precious metals was due to the US Dollar gaining in strength on the back of a potential passing of the tax cut bill. Tax cut bill is essentially done and dusted. Reconciliation should be less of a hurdle than passing the bill through the Senate. The reasons are as follows. 1. Those GOP lawmakers that support the respective bills are officially on record through their yea votes. 2. Differences between the House and Senate bills are easily reconciled. This is because both bills are in agreement with regards to the main broad strokes of tax reform.

A short term trade to play the bounce in US Dollar on the back of tax cut bill passing through the Senate.