The Week Ahead – Digital Tulips

The Week Ahead – Digital Tulips

November’s CPI was 3.1% y/y. The expectation was for 3.0%. October’s CPI was 3.0%. Inflation continues to creep northwards. Disregarding whatever inflation targets the Bank of England has, the chart below foretells that UK CPI could continue to climb to 4 to 5%. Inflation hitting 5%  occurred twice in the last 10 years.

US crude inventories decreased by -5.12 million barrels on the expectation of -2.89 million decrease. Baker Hughes US oil rig count decreased by 4 from 751 to 747. Oil production was 9780k barrels per day for week ending 08/12/2017, an increase from 9707k barrels per day in the previous week, pushing all time high production rate higher. The rise in rig count seemed to be attributed to the strong correlation to the price of oil. Oil production in US is now at an all-time high. The head on battle between US and OPEC continues.

Passage of tax bill step 1: The House of Representatives passed its tax bill with 227 yeas and 205 nays.

Passage of tax bill step 2: The real battle all along resides in the upper chamber; the Senate. The Senate passed the Tax Cuts and Jobs Act with 51 Yeas and 49 Nays, almost along party lines. The only nay vote from the republicans came from Bob Cockster Cocker Corker from the Great State of Tennessee.

Passage of tax bill step 3: Now that both houses of congress have passed their version of the tax bill, the two tax bills will now need to be reconciled and the final bill will probably be on President Donald John Trump’s desk by Christmas. For details on what is in the bill, refer to the two hyperlinks below. The first is the full text of the bill and the second is the highlights of the tax cut bill. 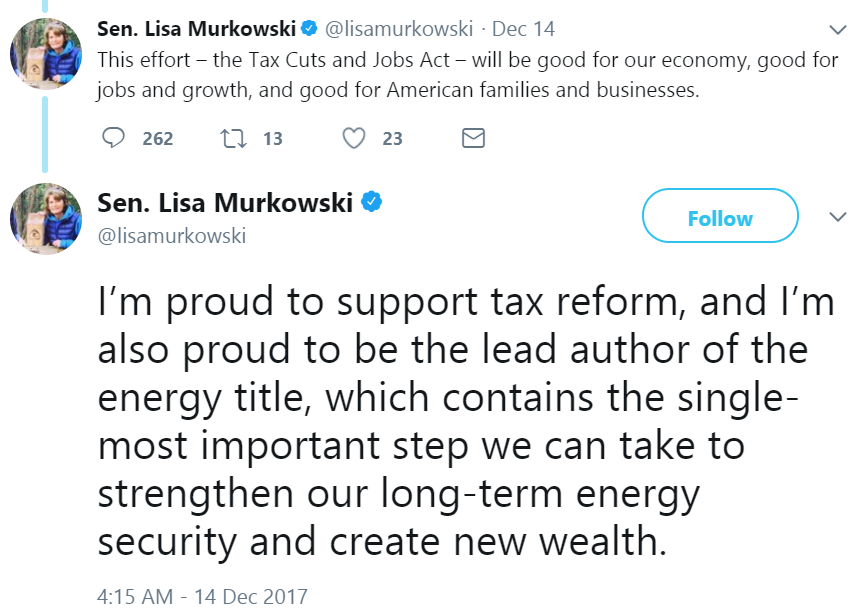 Washington, D.C. – Following the release of the final text of the Tax Cuts and Jobs Act this afternoon, the first major overhaul of our nation’s tax code since 1986, U.S. Senator Susan Collins (R-ME) applauded the inclusion of multiple amendments she championed that will help working and middle class families.

“Americans deserve a tax system that is fair, simple, and promotes economic growth,” said Senator Collins.  “I am pleased that the final tax reform bill includes all three of the amendments I authored, along with a number of provisions for which I strongly advocated, that will benefit lower- and middle-income families.”

In a significant victory for middle-income Americans, the legislation includes three amendments Senator Collins authored that will further reduce the tax burden on hardworking Americans, enhance retirement security, and help families who are struggling to afford high medical costs.  Specifically, her provisions will:

Marco Rubio was never a nay vote. His demands for child tax credit to be increased was pure political posturing in trying to gain air time and make himself seem important. His attempts to stand out among the other politicians was pretty sad. Little Marco was completely splattered by Big Don in the Republican primaries for President. Even if concessions were not given to please his demands, his nay vote would be insufficient to sink the bill. Even if concessions were not given to please his demands, he will still vote yea because voting nay on such an important piece of legislation would be political suicide. Giving him what he asked for was like giving candy to a whining child just so as to shut the kid up. 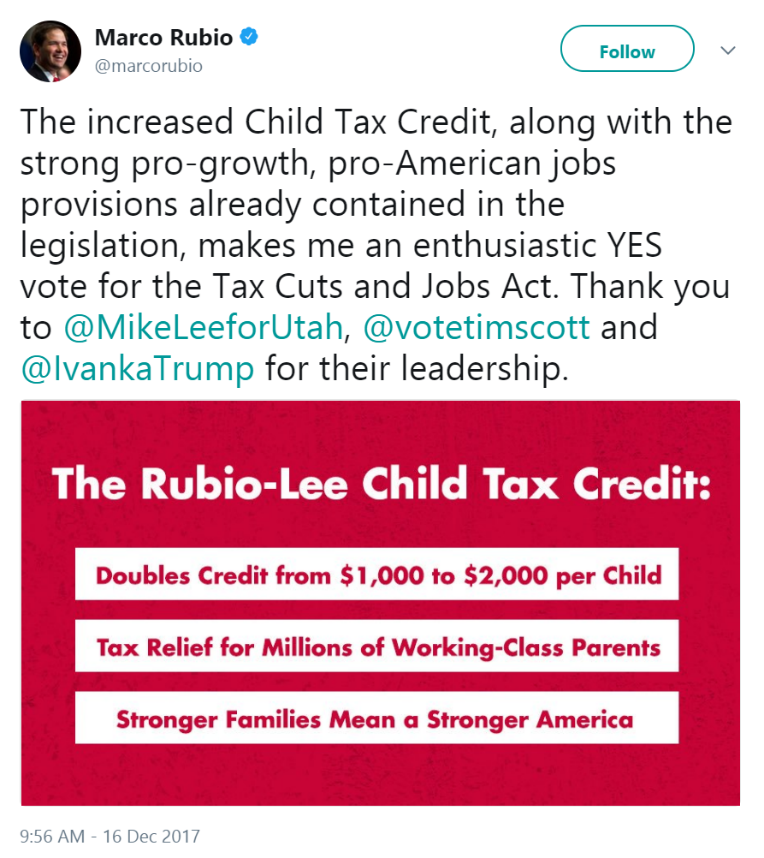 ““After many conversations over the past several days with individuals from both sides of the aisle across Tennessee and around the country—including business owners, farmers, chambers of commerce and economic development leaders—I have decided to support the tax reform package we will vote on next week.”

As I have previously said, his nay vote when the senate’s bill was voted upon was based solely on his hatred and distaste for President Trump and not because he was a fiscal hawk. The consolidated bill released did not cut the deficit at all. If he was a fiscal hawk, he would continued to vote nay. Yet Bob Cockster Cocker Corker’s stance flipped. Two reasons. First, if he continued voting nay, his legacy and more importantly his political career will be finished. The Grand Old Party will abandon him in quick order just like how Democrats are distancing themselves from toxic Hillary Rotten Rodham Clinton. Second, if he voted nay, the republican candidate for his senate seat in Tennessee will have a much tougher time winning in 2018 midterm elections. The only thing that changed since the senate tax cut vote till today was that Roy Moore’s defeat in a deep red state of Alabama. Bob Cockster Cocker Corker fell in line and voted for the future of the Grand Old Party, like the good obedient establishment boy he always was. He is an establishment politician through and through wearing a “fiscal hawk” cloak. This is exactly why voters hate establishment politicians. In the words of the Hillary Rotten Rodham Clinton “You need both a public and a private position”. 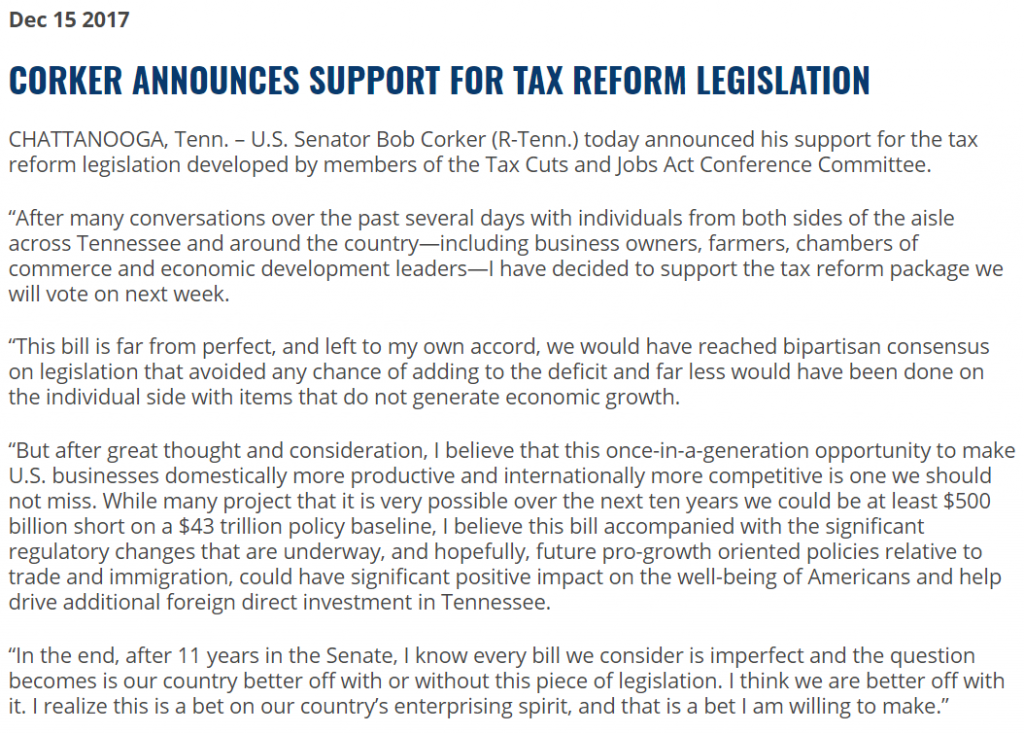 The FOMC voted 7 to 2 to raise Federal Funds Rate by 0.25% to 1.25% – 1.50%. Charles L. Evans joins Neel Kashkari in voting to maintain Federal Funds Rate unchanged, which in my opinion is the greatest takeaway from this meeting.

All 9 members of the MPC voted to MAINTAIN the official bank rate at 0.50%. In the words of Mark Carney, the BOE is to “ease our foot off the accelerator”.

Nothing changed in this meeting. Rates: “key ECB interest rates to remain at their present levels for an extended period of time, and well past the horizon of the net asset purchases.” Quantitative Easing: “Regarding non-standard monetary policy measures, the Governing Council confirms that from January 2018 it intends to continue to make net asset purchases under the asset purchase programme (APP), at a monthly pace of €30 billion, until the end of September 2018, or beyond, if necessary, and in any case until the Governing Council sees a sustained adjustment in the path of inflation consistent with its inflation aim.” 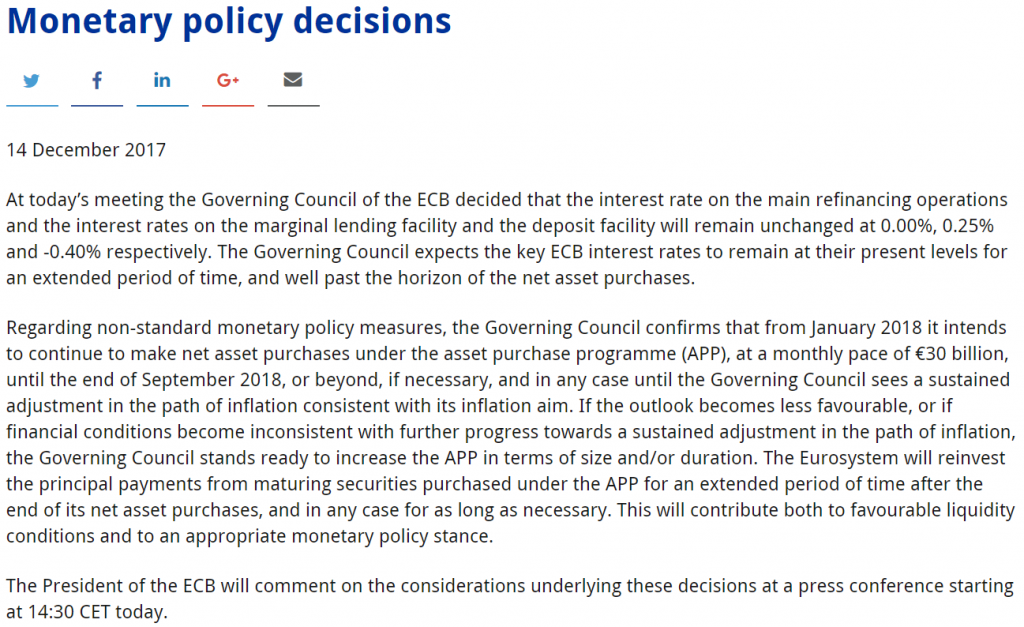 Both GDP and inflation expectations were revised upwards

According to Eurostat’s flash estimate, euro area annual HICP inflation was 1.5% in November, up from 1.4% in October. At the same time, measures of underlying inflation have moderated somewhat recently, in part owing to special factors. Looking ahead, on the basis of current futures prices for oil, annual rates of headline inflation are likely to moderate in the coming months, mainly reflecting base effects in energy prices, before increasing again. Underlying inflation is expected to rise gradually over the medium term, supported by our monetary policy measures, the continuing economic expansion, the corresponding absorption of economic slack and rising wage growth.

This assessment is also broadly reflected in the December 2017 Eurosystem staff macroeconomic projections for the euro area, which foresee annual HICP inflation at 1.5% in 2017, 1.4% in 2018, 1.5% in 2019 and 1.7% in 2020. Compared with the September 2017 ECB staff macroeconomic projections, the outlook for headline HICP inflation has been revised up, mainly reflecting higher oil and food prices. 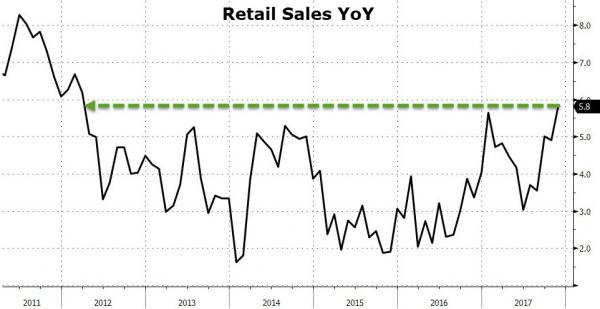 Governor Kuroda had been dropping subtle hints of a possible rate hike. 1) Reversal Rate 2) Talks about exiting QQE by withdrawing and not ramping up stimulus. Further hint dropping / forward guidance would provide a clearer picture on what the central bank plans to do soon.

Buy USD in anticipation of the bounce from the passage of the Tax Cuts and Jobs Act through Congress (House and Senate).

Some interesting Bitcoin data points for you 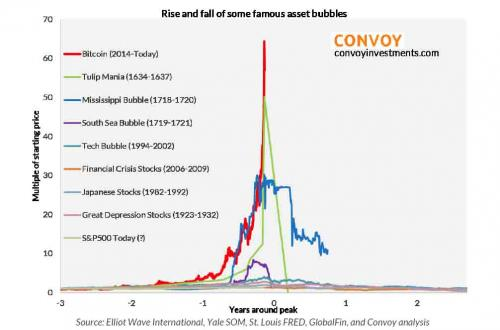 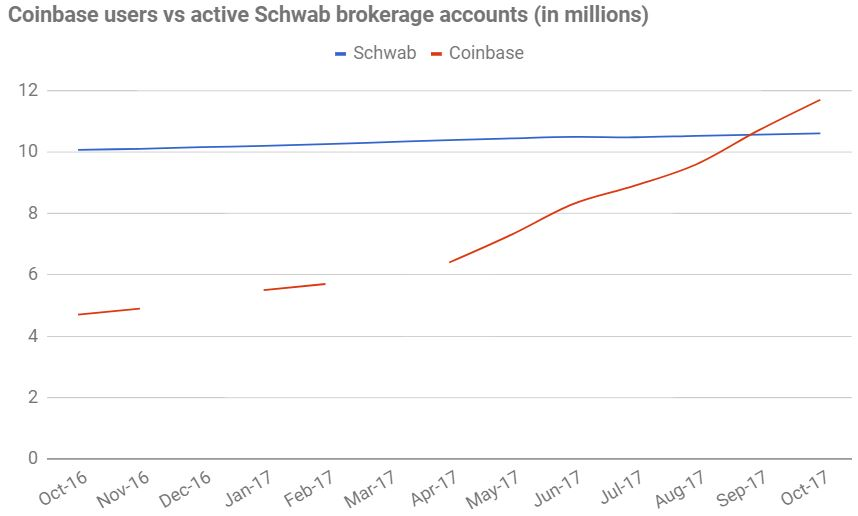