The Week Ahead – Collusion

The Week Ahead – Collusion

UK CPI y/y for the month of June was +2.6% on the expectation of +2.9%. Last month was +2.9%. This means that the probability of a rate hike by the Bank of England in their next meeting will be decreased. Imported inflation caused by weakened British Pound seemed to have started to drop off in the calculation of CPI. With worries of inflation running above 3% now alleviated, members of the BOE will have less motivation (though non-zero probability) to raise rates.

The Bank of Japan left their monetary policies unchanged as expected despite admitting that their uber-loose monetary policies will not artificially increase prices at the satisfactory pace until around FY 2019. 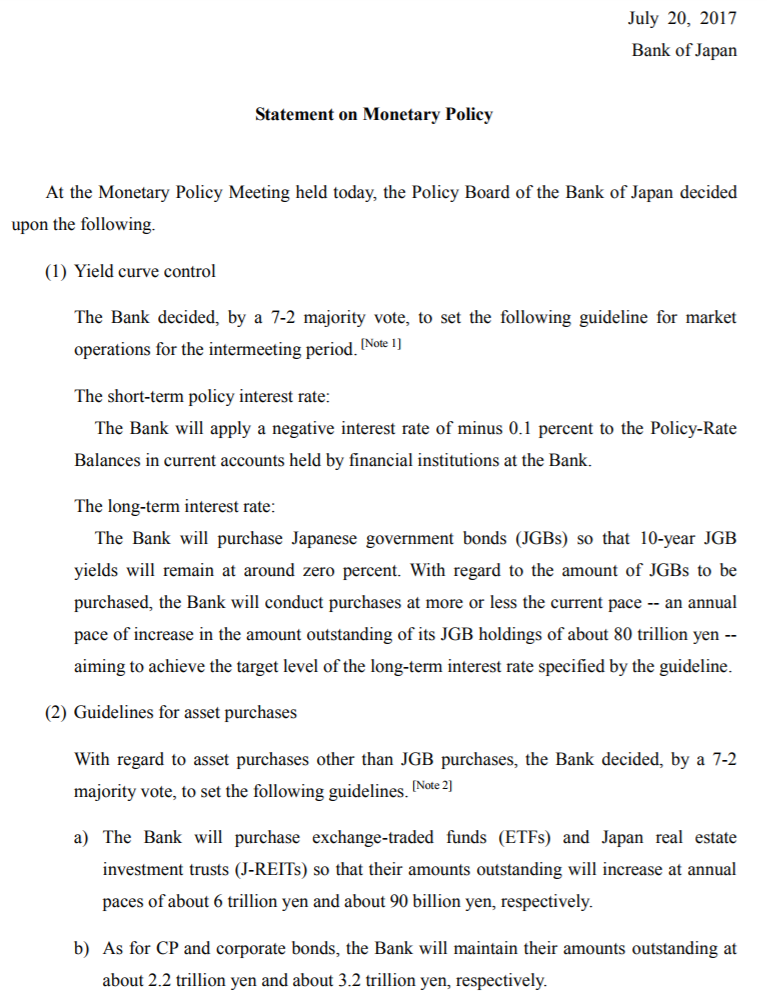 Screenshot from “Outlook for Economic Activity and Prices, July 2017” by the Bank of Japan. 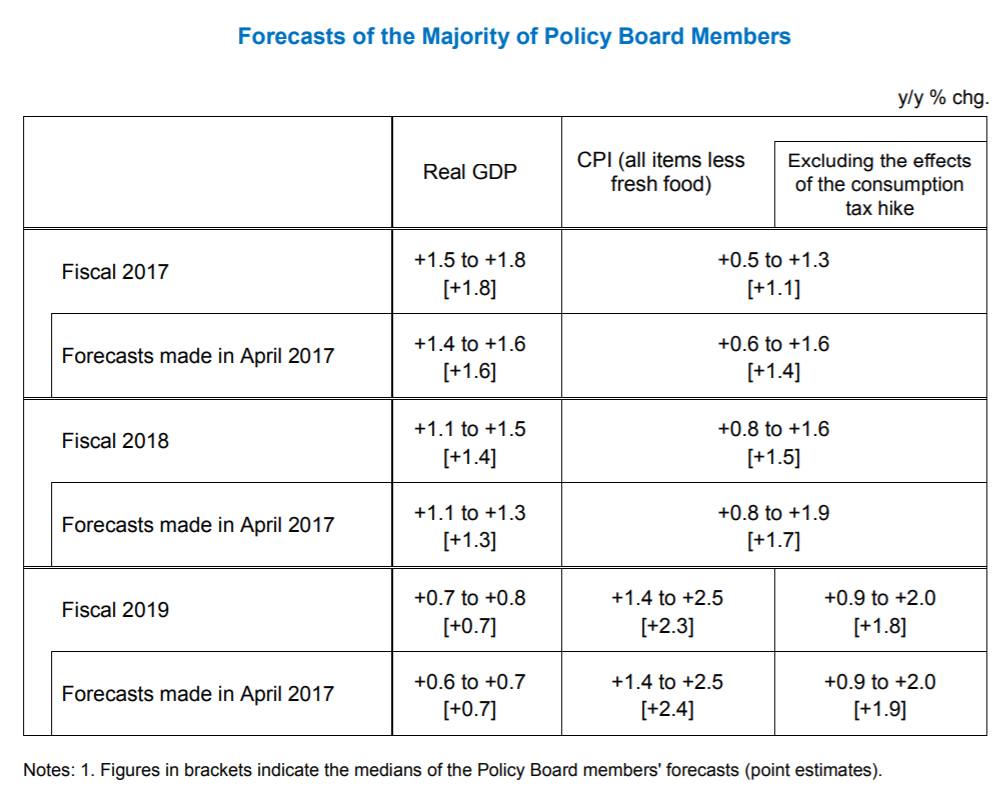 Just a reminder of the monstrosity of the task Kuroda and friends have got to tackle / have been tackling. Well, at least his two constant dissenters (Kiuchi, Sato) will be leaving the BOJ after this meeting and will be replaced by two “don’t rock the boat” economists (Suzuki, Kataoka).

The European Central Bank kept their monetary policies unchanged. The statement in July’s meeting is exactly the same as that in the meeting in June.

Further expounding on point 28 regarding tapering discussion via Question and Answer transcript:

Question: Could you give us a bit of a flavour of the discussion at today’s meeting? Mainly, have you held any formal talks about your strategy for the asset purchase programme after December of this year?

Draghi: Let me respond first to your first question and give you a sense of the discussion we had today. We reviewed the economic and financial developments in the euro area, where we took stock of the continuing improvement in growth momentum, but also of the fact that the inflation rate is still subdued – and really there isn’t any convincing sign of pickup for underlying inflation – while noting that the headline inflation will still be fairly volatile in the coming months. There was a general reiteration of the point that convergence of the inflation to our objectives remains conditional upon the very substantial monetary accommodation that is now in place.

So, all in all, one could try to summarise the exchange of views we had saying that it was around the concepts that we’ve expanded on on other occasions, like the concept of confidence that is basically generated by the growth momentum; but also the fact that we need to be persistent and patient, because we aren’t there yet. And prudent. We also were unanimous in communicating no change to the forward guidance; and also we were unanimous in setting no precise date for when to discuss changes in the future.

In other words, we simply said that our discussions should take place in the fall – or in the autumn, since we are in Europe.

Getting a sense on how output growth out of UK in the second quarter of 2017 will give us a flavour on the likelihood of a rate hike from the BOE. Just a flavour because at present it seem to be a coin toss / close call on whether there are 5 votes in favour of a hike out of 9.

No change in rates is expected. Most probably a non-event but language out of the non-data dependent Fed will always be important when getting a sensing on whether further tightening (rate hike and/or Quantitative Tightening) will occur in December. Plus there is no press conference. No press conference means no change in monetary policy. A pattern that had not been broken in years despite Yellen saying that “every meeting is a live meeting”.

EUR/USD is now broken cleanly through the resistance level at 1.1450 of the channel formation. Possible buying opportunity if it retests new support zone at 1.1450.

AUD/USD just recently broke above the long standing resistance at 0.7700 and closed near the high of the previous week. This indicates that buying pressure/momentum is present and chances of it being a fake out is diminished. Waiting for a retracement back down to 0.7700 zone would give a good opportunity to go long this currency pair. Next resistance zone will come in at around 0.9000 and 0.9600.

NZD/USD had broken out of its sideways channel pattern last week and closed near the high of the week. This indicates that buying pressure is present and that the probability of a fake out will be diminished. Waiting for it to retrace back down to 0.7300 zone before buying will be advantageous.

Trump met Putin in the toilet?

Honestly I am pretty sick and tired of reading news headlines that contains “Trump”, “Russia”, or “Collusion”. The mainstream media keeps emphasizing the point that Trump’s campaign “colluded” with the Russians. The word “collusion” is so vague that it is can mean almost anything. I keep hearing / seeing the word “collusion” but with zero substantiation to prove “collusion” or explain what it actually means. The mainstream media clearly knows that the more times they repeat the same point, the more truthful the point becomes. Just by repeating it enough times, opinion becomes fact. They probably took a page out from Trump’s playbook when he repeated the phrase “Make America Great Again” and “Crooked Hillary” all throughout the Presidential campaign and won fair and square.

If the objective is to get the Trump voters to change their opinions on him, it is not working. In fact it may have the opposite effect and strengthen Trump’s “Fake News” argument. According to Gallup, American’s trust in mass media had sunk to a new low. The more the media continues to crucify Trump, the more people in rural America will hate the media and hence the Establishment. There are 50 states in the Unites States, not just New York, California, and District of Columbia. If the mainstream media, and hence the Establishment, continues to live in their New York – DC cocoon, they will continue to lose future elections.

Money (a form of speech according to Citizens United v. FEC, etc) used to be the medium at which political parties compete to win elections. Not anymore. Case in point would be the by-election in the 6th Congressional District of the State of Georgia. Despite outspending the Republican candidate by a factor of 7.6 times, the Democratic candidate could not close the sale. Even the pollsters had been calling the race a slam dunk win for the candidate from the D camp. O not to forget, Trump—the businessman and reality TV star spent far less than the Hillary—the career politician and won handily.

The tide had changed. People do not want the Establishment status quo. People want change. If the Democratic party do not embrace Progressive policies and politicians (Bernie Sanders, Elizabeth Warren), they will continue to lose election after election to those in the R camp. New York – DC pundits are already hinting of the possibility that the Democrats will win back the legislative branch (House of Representatives and Senate) from the Grand Old Party. With the current don’t-rock-the-boat-status-quo strategy, that blissful thought be foreclosed upon and will stay only in the realm of a blissful thought.

Credits to Comically Incorrect for the image (ComicallyIncorrect, 2017)