A bright and sunny morning in Bangkok yet a dark and somber shadow hangs over Westeros.
News of the death of the monarch has reached all corners of the Kingdom as well as the rest of the world.
The markets have barely moved in response.
The SET actually closed higher yesterday as did the Thai baht.
Clearly not what the masses were expecting or me for that matter.
There is much information to be garnered from this as the old adage goes, follow the money.
Monday saw a cascade in the SET and fall in the baht, 6% and 3% respectively.
This was based on rumors that the kings health was fading.
In hindsight, following the price action we can see that the smart money had moved at the start of the week and by the time of the announcement yesterday, the news was priced in and profit taking had begun. 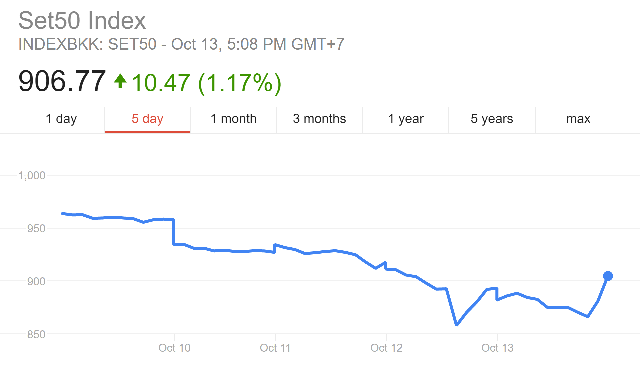 SET closed higher on the day
It appeared that everyone had an opinion on the Baht and most were disappointed with the result.
The weekly chart below illustrates how the technical channels constrained the price action.
Support became resistance and price is currently kissing the underside of the up channel.

The daily chart above shows how the falling resistance line held the baht within is downward range.
The overriding fundamental trend for the last year has been downward or a strengthening in the Baht.
This does not appear to have changed.
If anything the sad events have served to give the currency and index a sympathetic boost of sorts.
But for how long?

The iShares MSCI Thailand ETF has been in a sustained downtrend since mid 2013
If anything we can read from this price action is that the markets aren’t concerned with royal succession or the goings on in the royal palace.
The military is firmly in charge and the status quo has not really changed at all in Thailand.
Management has remained the same, monetary and fiscal policy going forward looks set to remain unchanged and although the Heir to the throne is widely seen as unpredictable and unstable, price action states that his role or power is limited.
The actual decision making power remains elsewhere and although the crown is important to the Thai people, its power to influence the economy and state is largely ceremonial.
Its wealth however is not. Valued by Forbes at approximately $35 billion.
This put the late king as the worlds richest monarch whilst the country endures a per capita GDP of around $5000. 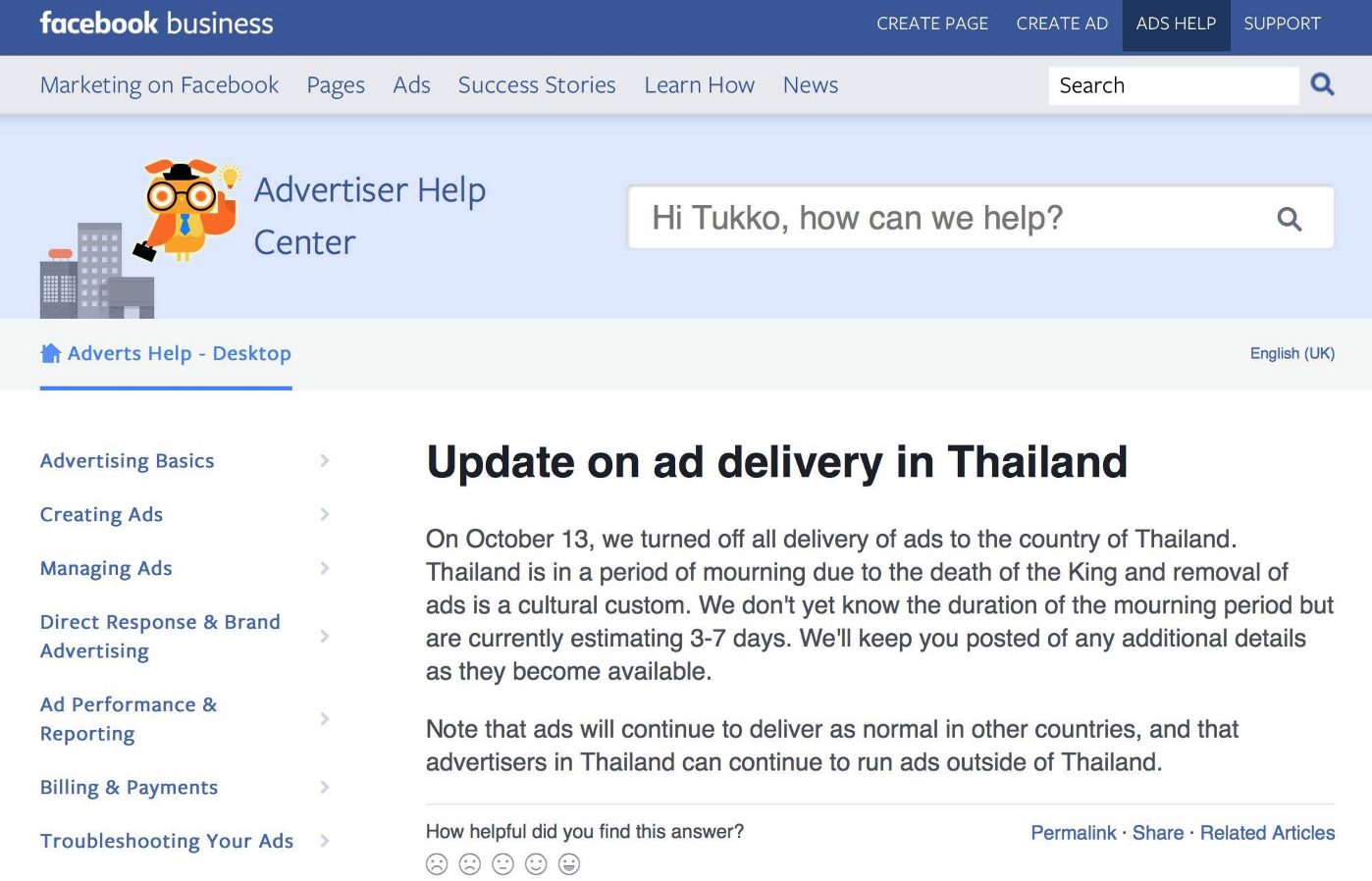 Facebook have turned off ads in Thailand for the next week
The first real impact of the death will be seen in the consumption figures for the overall economy.
The mandatory 30 day mourning period can be expected to reduce consumption and possibly investment during this time.
Nightlife has already shut down and is the most apparent indicator of the current state.
Those relying on the tourist dollars will certainly feel the pinch.
Regions like Pattaya that rely entirely on tourism will be the most affected.
The next full moon party on Koh Phagnan due to take place on 17 October has already been cancelled.
When the sister of the King died in 2008 the government announced 100 days of mourning.
During this period the Thai economy grew by 3.3% which at the time was the weakest level of growth of all the countries in Asia.
The economy only started to recover in the second quarter of 2008.
Using this as an indicator of current circumstances, the Thai economy could be weak for as long as 6-12 months.
I believe that the Thai stock market will be hurt in the short term and stability will return in the medium to long term based on the return of foreign capital flows.
Generally, Health Care and the Materials sectors should do well over this period whilst Consumer Discretionary and Tourism related stocks are the most likely to be the hardest hit.
Stocks i have a particular long bias towards include Bumrungrad Hospital (BH), AIS (ADVANC) and Indorama Ventures (IVL).
On the short side i see Airports of Thailand (AOT) and several property developers struggling due to the decrease in tourism primarily and the delay or cancellation of marketing events for new projects.

AIS is a company with strong, solid fundamentals and despite the mourning period, i expect phone and internet usage to go up due to restrictions on many other activities. It doesn’t hurt that the heir to the throne is on good terms with the founder of this company.

IVL is a global seller of plastics, polyester and chemicals so domestic Thai demand is irrelevant to its revenue.
As for the future of Thailand it is difficult to see hows things could get worse under a new monarch.
The previous one reigned over a dozen coups and as many constitutions yet he was considered a stabilising force in Thai politics. Food for thought.
As always take care of yourselves and each other.
Your “trying to avoid incarceration by less majeste” analyst.
Jehan
Share It
0 Comments
Trading Crude Oil
18/10/2016 0 Comments