The week began with an excellent Markit PMI report showing US manufacturing at 53.2, up 1.7 from September and the highest reading in a year. This momentum failed to gain traction and the SPX closed lower on the week.

180 S&P 500 companies reported earnings last week making it the busiest week of the earnings season. Earnings are beating by 6.25& and revenue is surprising by 0.7% on average. Companies that beat both top and bottom line are outperforming by 1.3% whilst companies that are lagging are missing by -3.9%.

Third quarter US GDP came out better than expected at 2.9% versus the expectation of 2.5%. Is the economy coming out of its low growth environment? This is a good data point but more evidence will be needed to support this argument.

The bombshell out of the US last week was not a data point but rather the FBI announcement that they are going to reopen their investigation into Hillary Clinton’s use of a private server during her tenure as Secretary of State. This announcement was made 11 days before the presidential elections on the 8th of November 2016. The financial markets had an increase in volatility after the news broke. Risk assets (stocks) sold off while safe havens (gold, silver) were bought. USD/MXN (US Dollar vs Mexican Peso) gained 1% in value. Betting sites showed gains in the probability of a Trump victory and a drop in the probability of a Clinton victory. The average of polls based on realclearpolitics.com showed that the race has started to tighten. I would prefer to be out of the market during this period.

Expectations are for no interest rate change by the Reserve Bank of Australia. There has not been significant deterioration in the Australian economy to warrant a rate cut. Commodity prices have already dropped significantly and the RBA has in response cut their interest rates several times in the past year. I believe this will be a non-event since there is no expectation for changes in interest rates. If the Chinese economy continues to worsen in the near future, the RBA may take steps to loosen their monetary policy stance.

The Bank of Japan continues to face difficulties in achieving its 2% inflation rate target. Despite not achieving its inflation target, the market seems to expect no radical change in the BOJ’s monetary policy, mostly because they do not believe the BOJ has the capability and courage to significantly expand its asset buying. USD/JPY is currently at 104.72. Strong support at 100 seems to be very strong support which makes it a good zone to go long the currency pair.

Fed Funds Futures are pointing to a 91.7% chance of an interest rake hike in the next meeting. This is interesting for the following reasons. 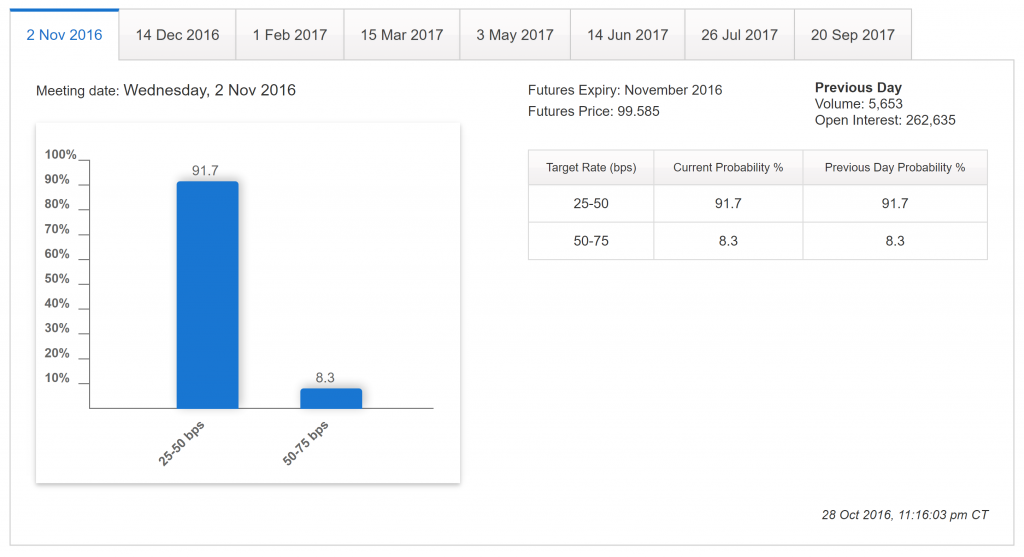 An interesting insight is that there is no press conference with Janet Yellen after the release of interest rate number.

The market has picked up on the tendency of the Fed to only make changes in monetary policy during FOMC meetings where a press conference is scheduled. Janet Yellen has categorically rejected this claim and insisted that every meeting is a “live meeting”.

The Bank of England has cut interest rates once since the Brexit vote by 25 basis points during their August meeting and has not cut it since. The expectation is for interest rate to be kept at 0.25% (a record low) and no increase in their QE program. This should be a non-event.

It’s again the first Friday of the month, which means non-farm payrolls day. Expectation is for 175k jobs created and an unemployment rate of 4.9% (drop of 0.1%). Non-farm payroll numbers are just like the lottery. It is almost impossible to guess the number

WTI has maneuvered beautifully in our direction, a function of fundamental supply demand drivers and a strengthening dollar. 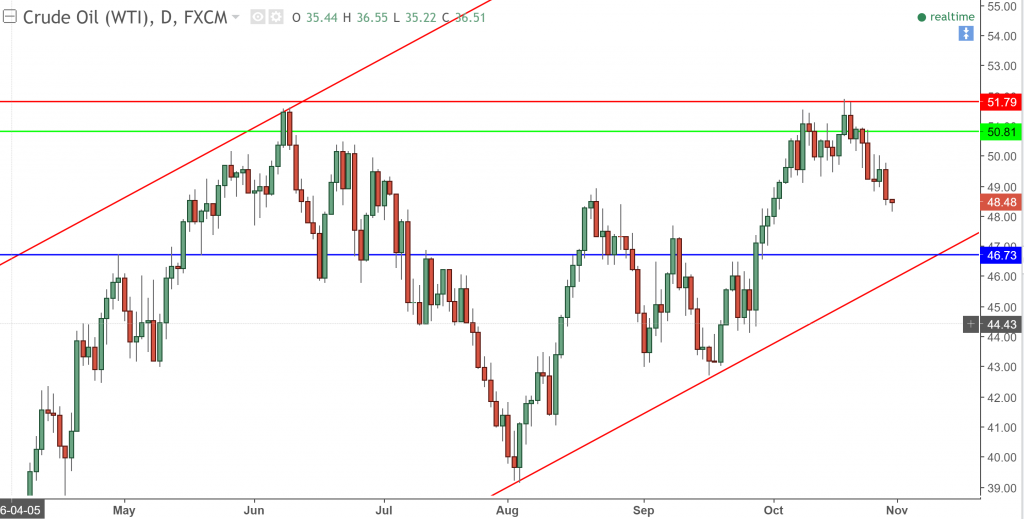 USD/CAD plays on the same them mentioned above and in previous updates.

I am looking for a retest of the 1.32ish level to initiate a long position in USD/CAD. 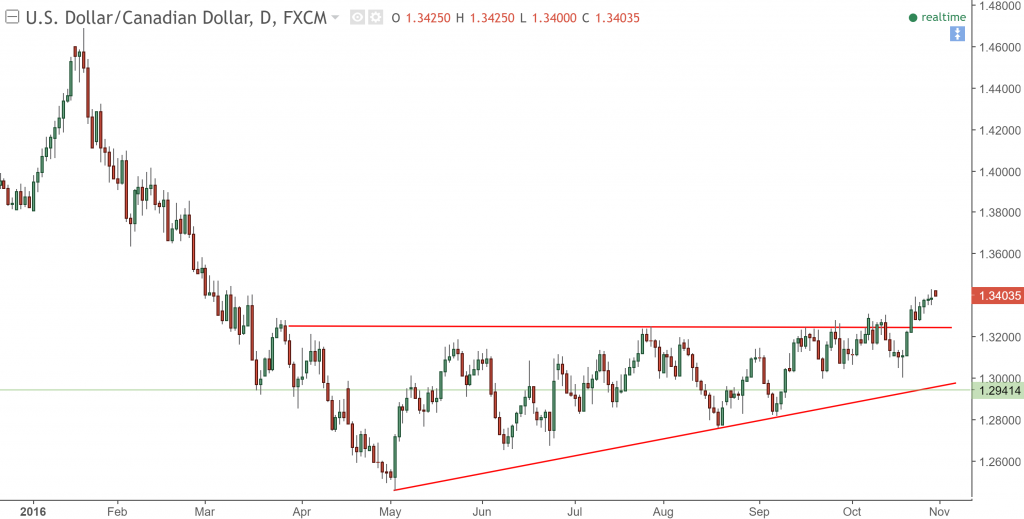 Silver has displayed exceptional weakness in recent months breaking through support at the 19 and 18 dollar handles. Price action in consolidating under the longer-term resistance trend line. Selling silver at 18.37 looks like a favorable risk to reward trade with support coming in at the 17 level. One to watch in the coming days. 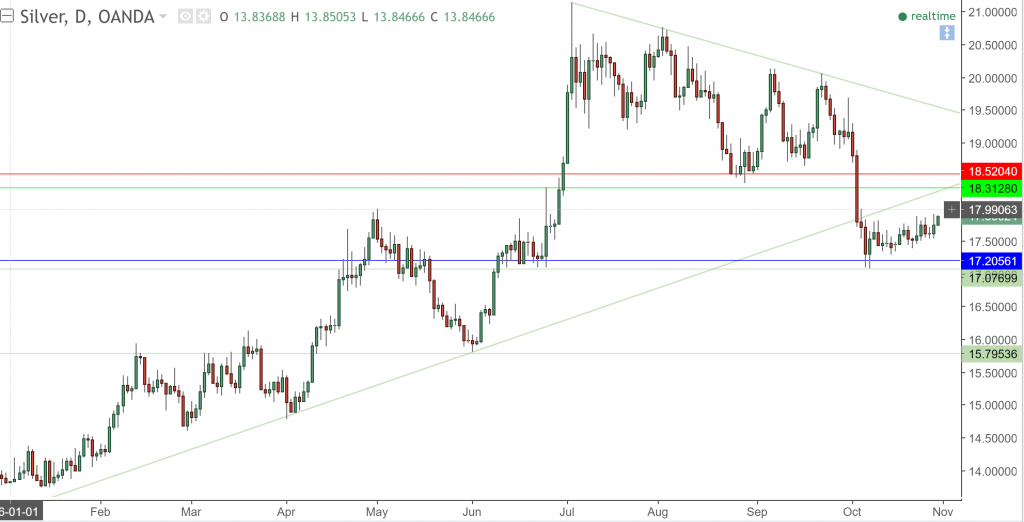