The Week Ahead – Terror May leads the polls

HomeGeopoliticsThe Week Ahead – Terror May leads the polls

The Week Ahead – Terror May leads the polls

US crude inventories dropped -6.43 million barrels on the expectation of -2 million drop. Baker Hughes US oil rig count rose another 11 from 722 to 733.

Overall a very terrible jobs report for May. This comes at the time when the Federal Reserve is deciding whether or not to increase interest rates by another 25 basis points.

Quoting the May’s FOMC minutes: “Members generally judged that it would be prudent to await additional evidence indicating that the recent slowing in the pace of economic activity had been transitory before taking another step in removing accommodation.”

With a weak labour market in May and April’s labour figures being revised downwards, it does seem pretty clear that the Fed did not get the evidence they were looking for. The weak economic data regarding the labour force seem to suggest that the slowdown in economic growth in Q1 may not be “transitory”. Whether or not the Fed hikes interest rate in 2 weeks from now will be a close one. With this bad jobs report, Goldman Sachs had readjusted backwards the timeline the Fed will undertake to remove monetary accommodation.

Another drawdown in crude oil inventories?

Consensus seem to be that the ECB will not change their monetary policy. However, the language in the statement will be key. With a strengthening European economy, continued hawkish rhetoric is expected.

Polls are all over the shop. YouGov did release a report last that showed that there is a chance that the Conservatives may not win 50% of the seats in the House of Commons. However the polls all showed that support for Labour had strengthened fast but I still doubt Corbyn (leader of the Labour party) will be the next Prime Minister. 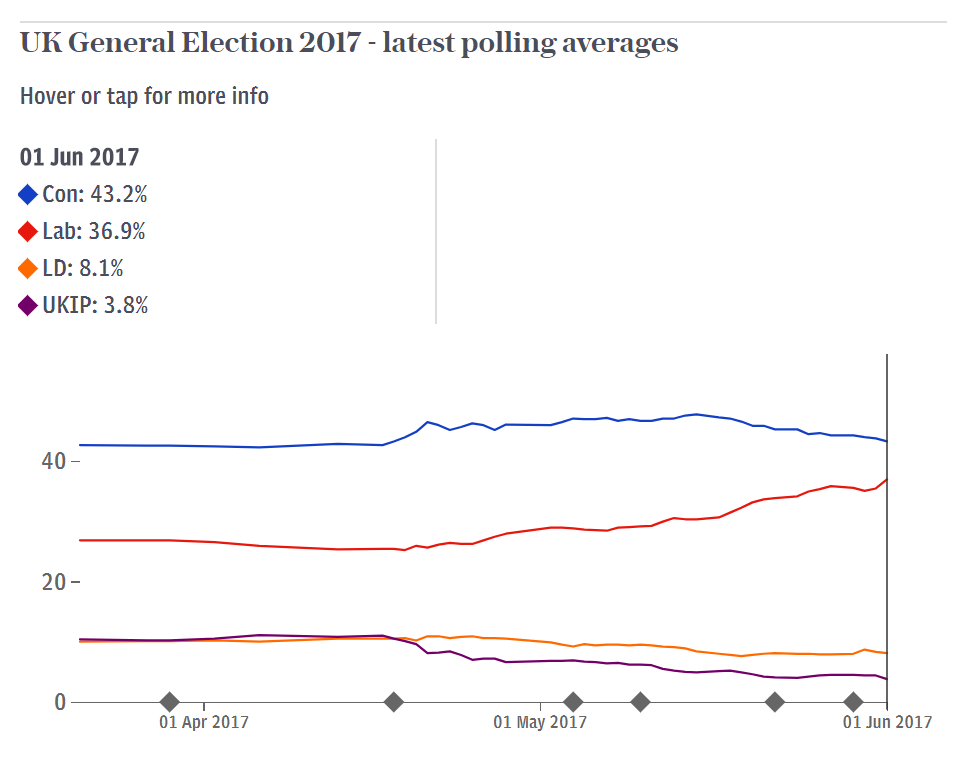 For the past 6 months, USD/JPY had been in a downtrend as seen from the series of lower highs and lower lows. On the daily chart, it is observed that the 120 support zone was broken to the downside on Wednesday. US Dollar weakness was due to weakening US macroeconomic data. 1) Poor US Q1 GDP at 1.2% 2) CPI continued to trend downwards in April 3) Poor retail sales in April. 4) Labour market seemed weak in April and May

Selling USD/JPY at around 112 when it retraces back up to that zone would be favourable for a target at 109.50 or lower.

The Japanese economy is growing at a steady pace (+2.2% annualized in Q1 and fifth consecutive quarter of positive growth) and this has made the Japanese Yen stronger these past months.

Counterargument to short USD/JPY will be as follows. 1) Language out of the Fed had been hawkish and market is now placing the odds of a June rate hike at 88.2%.

Final thoughts on short USD/JPY idea: The Fed monetary policy announcement is in 1 week and 4 days. The tenet the Federal Open Market Committee seemed to concern itself most in recent times had been the weak economic growth in the US in Q1. They think that the weak growth rate in Q1 was transitory and not something to really mull over. However, with a weak jobs report in May and April’s jobs data being revised lower, the Federal Reserve had not received much evidence to prove that Q1 GDP was “transitory” and therefore this makes the rate hike issue relevant.

WTI had respected this red bullish trend line for more than a year now. On the daily chart, it is observed that Friday candlestick is a bullish pinbar at horizontal support zone at $47-$48.

USD/CAD has come up to resistance at 1.35. Selling short at that area and with target set at bullish trend line around 1.3250 would be favourable.

Implying from the language the Bank of Canada issued in its most recent statement, it seem to suggest that the BOC does not think that “lower oil prices” will continue to be a drag on the economy. The BOC had not made such an assertion before and this pivot towards increased confidence in its economy is something to take note. Will the BOC start to tighten its monetary policy just like what the Fed in USA had been doing? The probability of an increase in interest rate in the next meeting has definitely risen.

4) Labour market seemed weak in April and May

President Trump pulls USA out of Paris Accord: This man really does what he says. The European leaders must really be furious with him. First NATO, then climate change.