The week ahead – Pricing in Trumponomics

HomeEconomyThe week ahead – Pricing in Trumponomics

The week ahead – Pricing in Trumponomics

The past two weeks have seen the biggest bond moves in 26 years. As a result, sectors like Utilities and Real estate have been smashed.

The term Trumponomics has been coined which is a play on Reaganomics. This similarities between the two are based on plans to spend, spend, spend.

Under Reagan, the US government cut federal corporate taxes from 46% to 34% and propelled the US economy to its longest growth cycle since the end of the second world war. 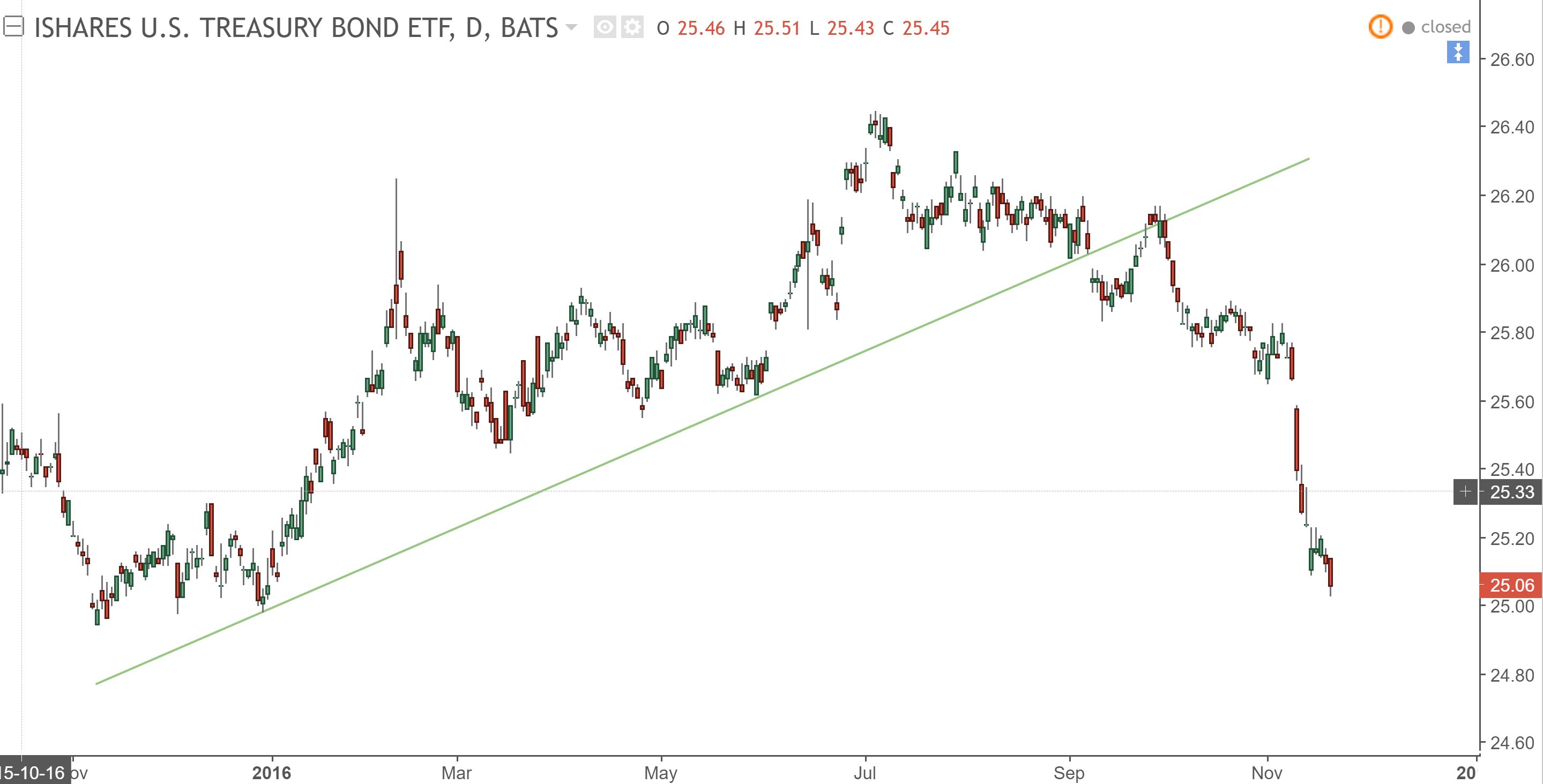 Fed Funds Futures puts the probability of a 0.50%-0.75% rate hike in December at 95.4%. The market is almost certain of a December rate hike.

Nowhere is this more apparent than in the US dollar. DXY has broken out of its 2 year range suggesting that a December rate hike is already priced in. It is my belief that once the Fed raises rates, a cap on the dollar will be in place. The short term could see profit taking and a bounce in bonds.

In the interim, the US is exporting inflation. Buyers of petrol in Europe, for example, see price rises at the pump because oil is priced in dollars. 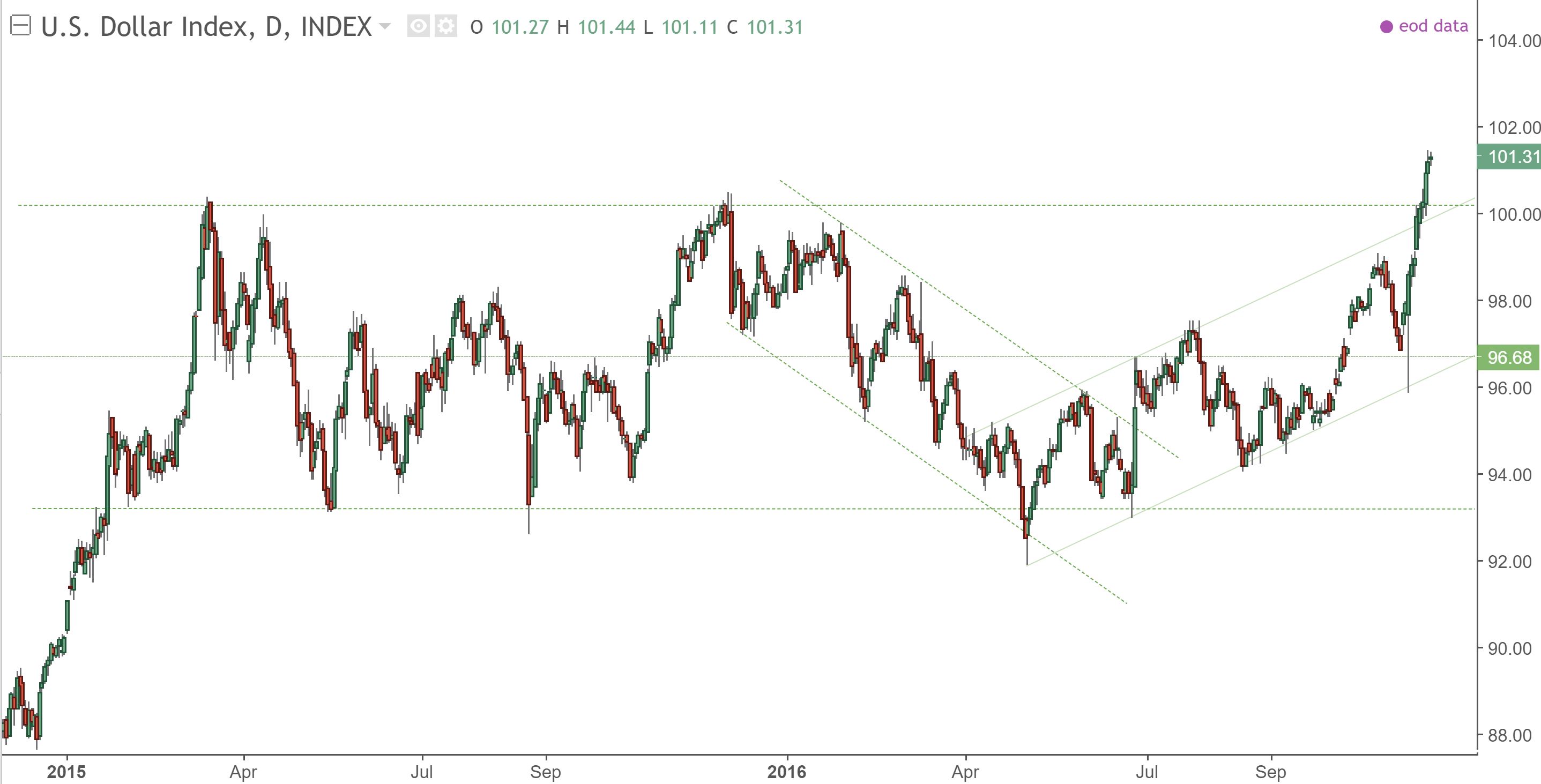 In spite of the stronger dollar, copper has been on a tear. An important lead indicator on global growth, this warrants attention.

However, as can be seen below the commercial traders believe this pricing may be out of line. The have moved to a large short position which means they think the price would move lower. They’re usually right.

Similar price action was seen recently in natural gas and coffee with nat gas falling 25% in the last few weeks. 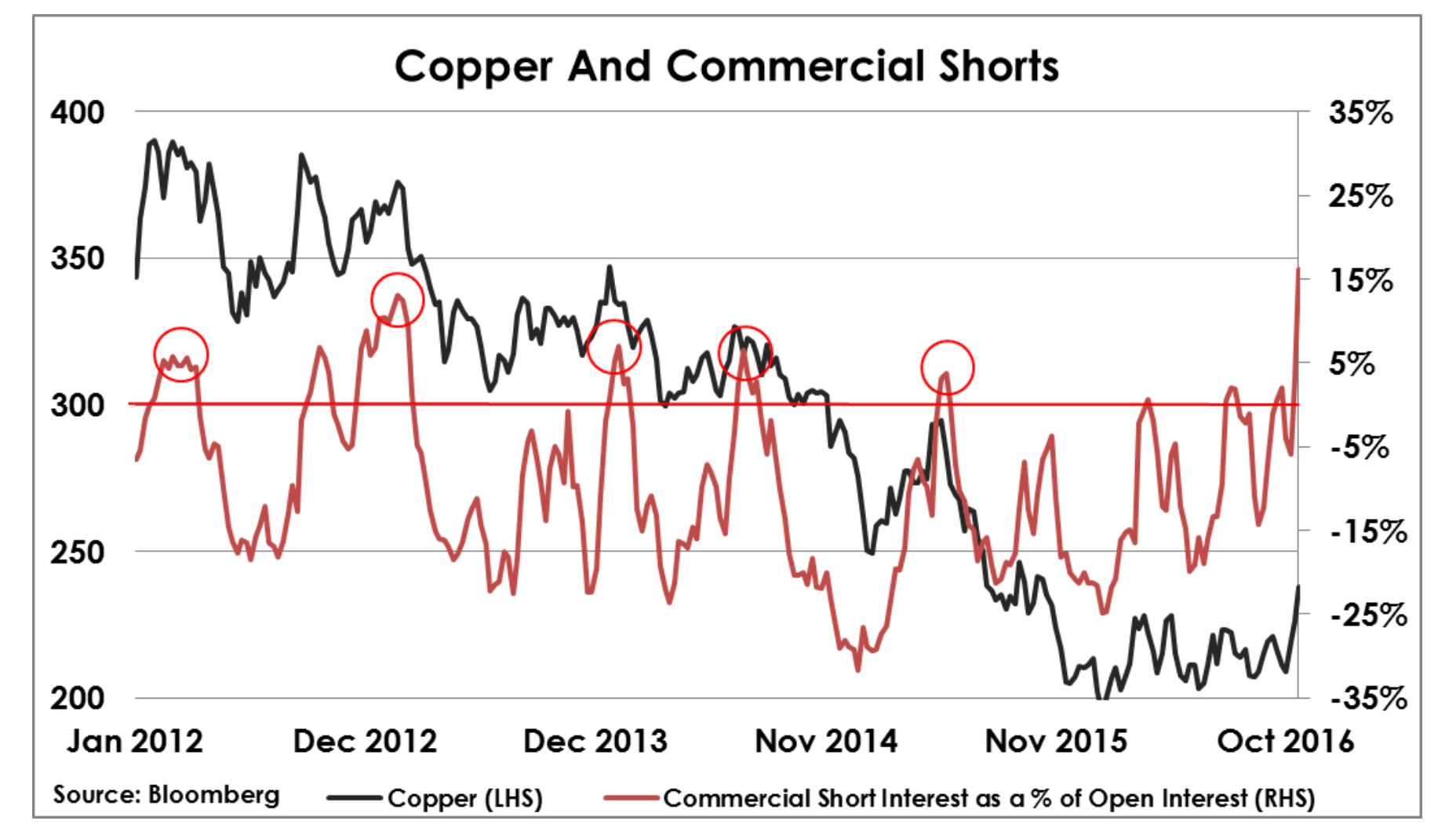 When commercial net shorts (red) as a percentage of total open interest rises above 0%, the price of copper tends to correct.

Another indicator of global growth is the South Korean index, the Kospi. This is due to the heavy cyclical component to the Korean economy.

Its sideways price action has mirrored the lacklustre global economy.

It currently sits on key trend-line support. Where it goes from here will be a key marker for the global economy. 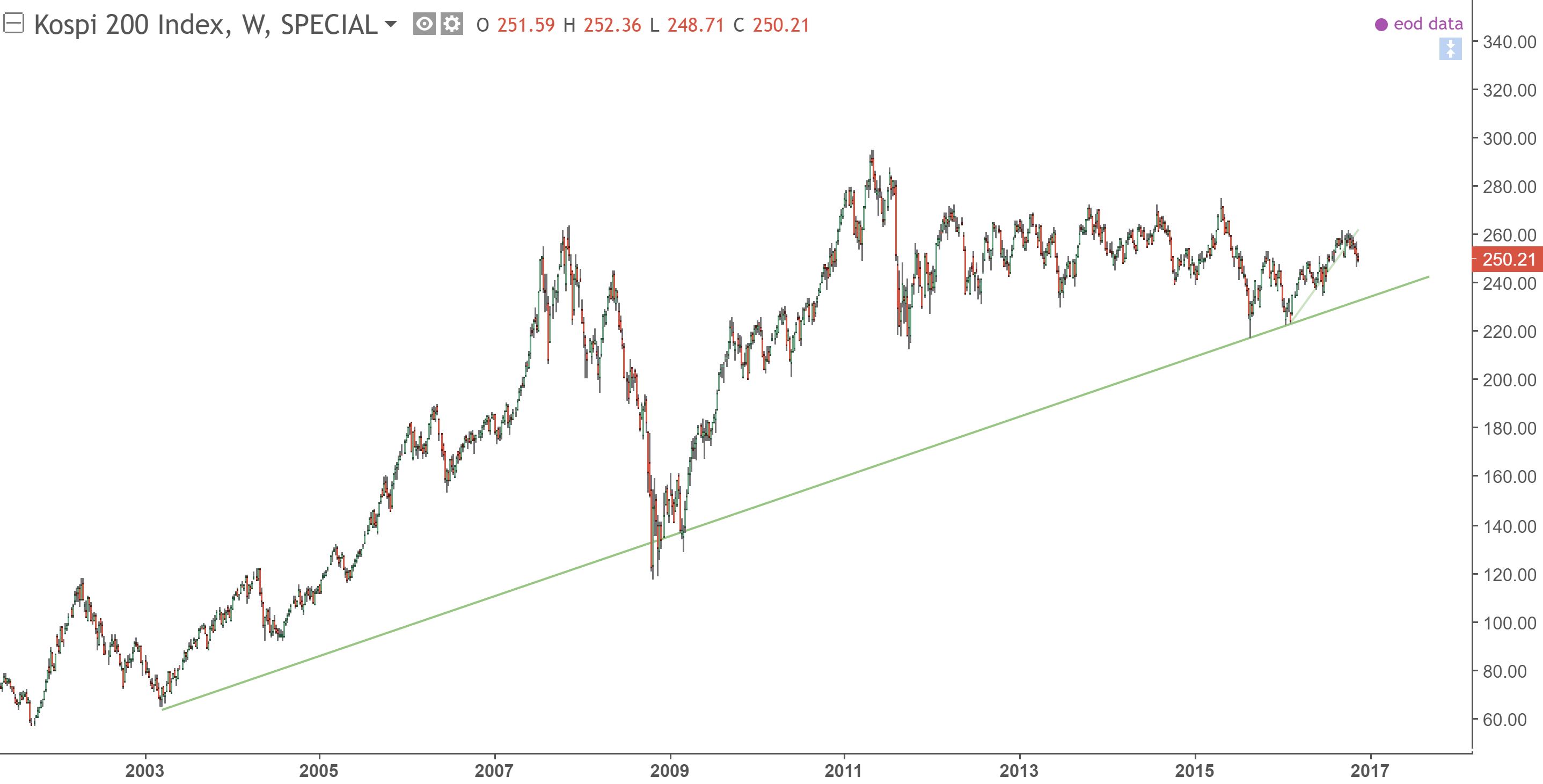 One instrument that has been a source of confusion for me is gold. It is viewed as an inflation hedge meaning it should be rising with inflation expectations.

This has not been the case and i believe dollar strength has obscured the rise in gold.

The chart below shows that the price of gold has been going up recently in the other major currencies like the euro and yen.

As discussed, I believe interest rates, copper and the dollar are overdone and should correct.

Once that happens i expect gold priced in dollars to mimic what’s happening in other currencies and move higher. 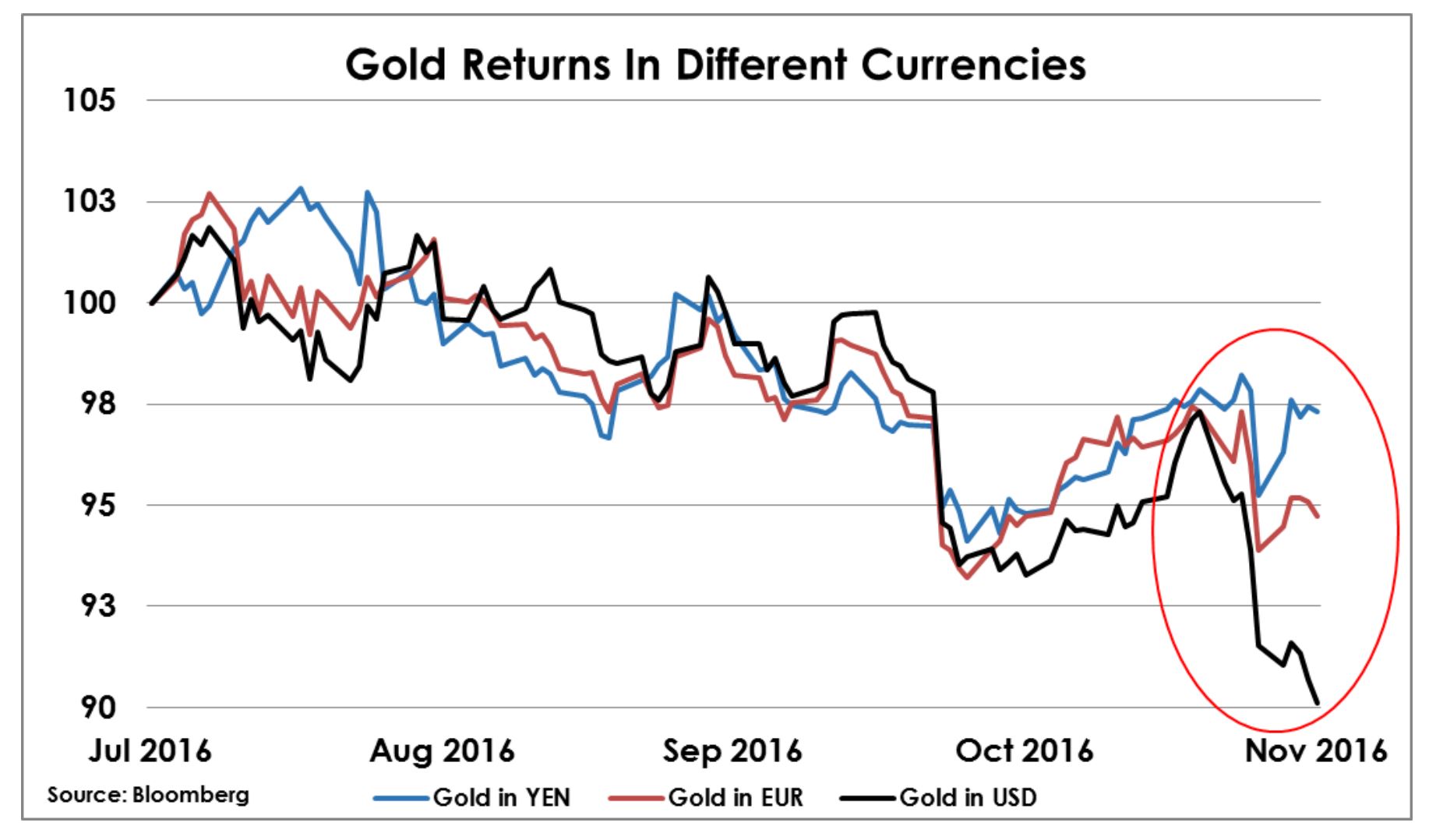 Interesting times lay ahead as we move into the end of 2016.

Time to be both vigilant and opportunistic.