The Week Ahead – Populism

The Week Ahead – Populism

Since none of the 11 candidates won the majority (50%) of the votes, the French presidential elections will move onto a runoff on 7 May 2017 where it will be between Emmanuel Macron of En Marche and Marine Le Pen of the National Front (FN), the two best performers in 23rd April first round elections. Mr Macron is leading Le Pen at the moment. But having seen UK’s Brexit and US’s Trump victory in the Presidential elections, one should never discredit far right Le Pen’s chances of winning the runoff. 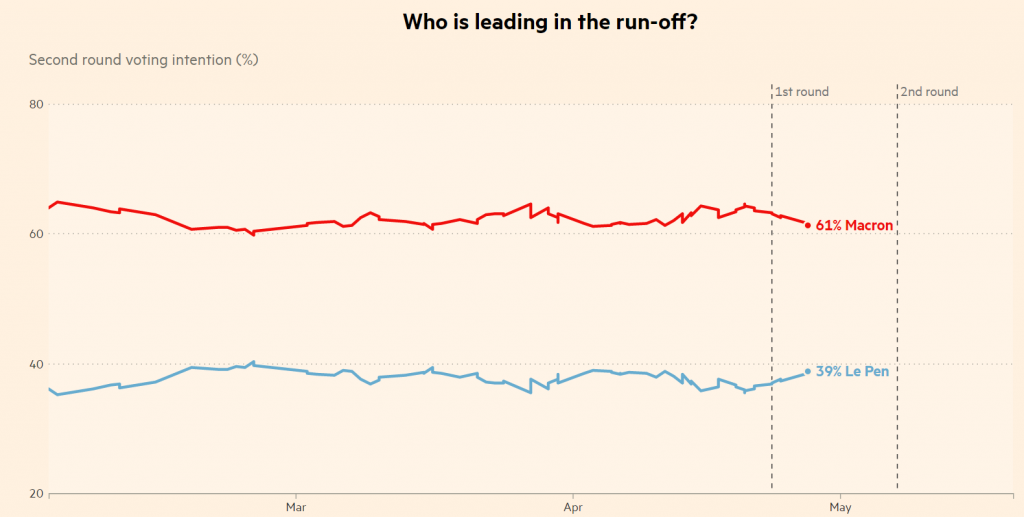 US crude inventories dropped by -3.64 million barrels last week on the expectation of -1.75 million barrels decline. US Baker Hughes rig count rose another +9 from 688 to 697 (15th straight week of increases).

The Bank of Japan kept its interest rate and monetary policies unchanged as expected. Overnight interest rate kept steady at -0.1%, 10 year government bond yield at about 0%, and purchasing government bonds at ¥80tn a year. GDP forecast for 2017-2018 fiscal year was raised from 1.5% to 1.6% while CPI was lowered from 1.5% to 1.4%. It seems like the Bank of Japan wants to wait for further deterioration of inflation (and GDP) and strengthening of the Japanese yen before it will contemplates further loosening policies.

The European Central Bank kept all three interest rates unchanged. However the language in the press release is pretty dovish. “If the outlook becomes less favourable, or if financial conditions become inconsistent with further progress towards a sustained adjustment in the path of inflation, the Governing Council stands ready to increase the programme in terms of size and/or duration.” “Regarding non-standard monetary policy measures, the Governing Council confirms that the net asset purchases, at the new monthly pace of €60 billion, are intended to run until the end of December 2017, or beyond, if necessary, and in any case until the Governing Council sees a sustained adjustment in the path of inflation consistent with its inflation aim.”

However, we do see that inflation in the Eurozone has been picking up, which places the ECB in a tough spot between preventing inflation to exceed 2% mandate and creating growth in the lackluster Eurozone.

Will US crude oil inventories show another drawdown?

The expectation is for no change in monetary policy out of the Federal Reserve (75 to 100 basis points for Federal Funds Rate). 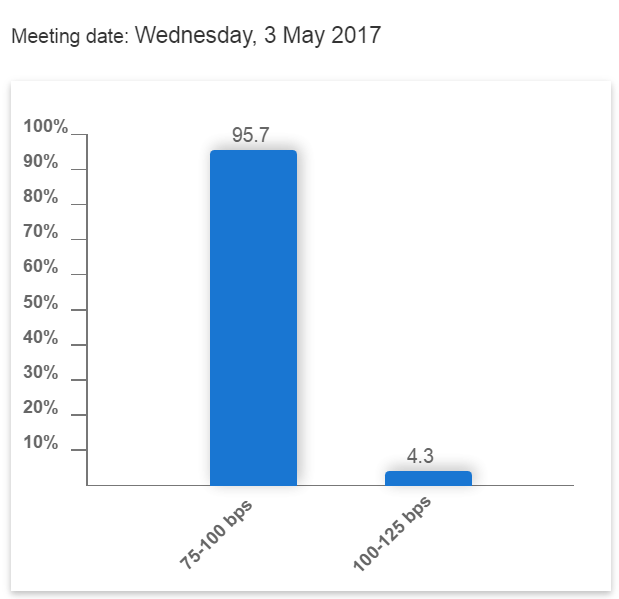 It is the first Friday of the month which means US jobs report day. Jobs created in April is expected to be 194k (98k in March) while unemployment rate to come in at 4.6% (4.5% in March).

On the daily chart, oil had tested upward sloping trend line 4 times and had bounced from there. Thursday was the 5th time it tested the trend line. Going long at around $48.70 would give a good reward risk ratio with target at around $53 to $54.

The past 3 weeks showed price declines when crude inventory showed a drawdown.

Some motivations for high gold price will be as follows. Interest rates are trending back down again. President Trump’s ongoing conflict with Supreme Leader Kim Jong-un. A pickup in inflation in US and Eurozone.

Democracy (also known as “rule of the majority”) meant that the will of the people must be honoured even if the candidate/agenda you support did not turn out to be victorious in an election. According to Wikipedia, “Populism is a political doctrine that proposes that the common people are exploited by a privileged elite, and which seeks to resolve this.” “Its goal is uniting the uncorrupt and the unsophisticated “little man” against the corrupt dominant elites (usually established politicians) and their camp of followers (usually the rich and influential).”

When the current status quo is not working for majority of the people, they will choose an alternative that is different from what is currently on offer. However the established elites of society, happy with how things are, will not want changes to be made to their system and “rock the boat”. They will therefore label this populist movement to be bad and will find ways to prevent these changes to be made. At the end of the day, a billionaire’s vote will be worth exactly the same as a person that does not have two nickels to rub together. Brexit to Donald Trump to now Marine Le Pen? A lesson the established elites must learn is never to discredit the voice and anger of the “little man”. Did I just read that Theresa May called for general elections? The Tories is going to ride on the gravy train of this populist movement and crush Labour on the 8th day of June 2017.

Why the poorest county in West Virginia has faith in Donald Trump | Anywhere but Washington: https://www.youtube.com/watch?v=eqceHviNBC4&t=289s