The Week Ahead – Long WTI?

The Week Ahead – Long WTI?

US crude oil inventory had its first drawdown in 9 weeks. Inventory came in at -237k instead of expectations’ figure of +3.13 million barrels build. Baker Hughes’ rig count increased by 14 from 617 to 631. It is the 9th straight week of increase in rig count and out of the past 37 weeks, 35 weeks were increases. Will OPEC do nothing about this resurgence in American hydraulic fracturing?

The Federal Reserve raised its Fed Funds Rate by a quarter of a percentage point for the 3rd time since the Great Recession (50-75 to 75-100 basis points). The market had totally anticipated that the hike would happen. This non-event just made what the market anticipated a reality. Regarding the dot plots, they were exactly the same as what was predicted in the December’s meeting. The Fed is still sticking to their guns in predicting 3 rate hikes in 2017. One down, two more to go. With regards to the Fed’s economic forecasts, there were all the same too. On a whole, the Fed is very hawkish on interest rates and the US economy. When it comes to the markets, the US Dollar was sold off hard, probably because traders who bought US Dollars on the anticipation of a rate hike are now selling them to take profits.

The BOJ kept all their monetary policy tools unchanged as before. The expectation is for no change in BOJ’s monetary policies. It was a non-event.

Will US crude inventory start to fall? I lean on the opinion that it is a no. The reason for my opinion hinges on the fact that US rig count is still rising.

Expectations are for no change in interest rate out of New Zealand.

Having broken the $51.50 support, WTI is now taking support off the upward sloping trend line. Buying WTI at around $47.50 and targeting $51.50 will give good reward risk ratio on a bet that the price of oil will retrace after the large sell off. 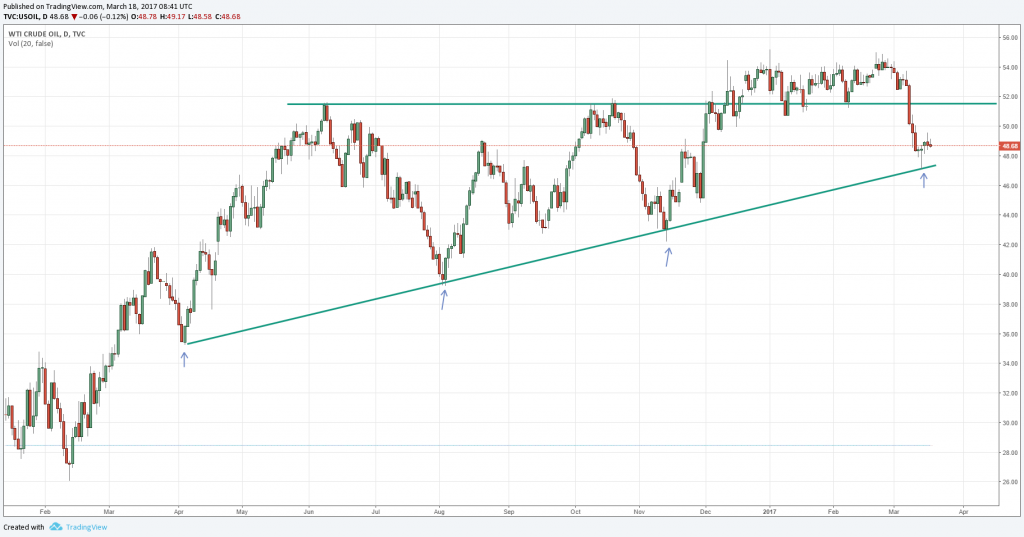 However since the Fed’s rate decision, US Dollar have been weak. This is counter intuitive to what a rate hike does to a currency, which is supposed to strengthen it.

However, it seems like the long EUR/USD boat may have left the shores of the weekly chart. When looking at the daily chart, we see that buying opportunity may come in at 1.0675 (red line).

The Fed did indeed raise the Fed Funds Rate for the 3rd time since the Great Recession. However, the market seems to be shrugging off their hawkish narrative as seen by the selloff in US Dollar.

There was no change in monetary policy out of the European Central Bank. Mr Mario Draghi gave the market several hawkish statements that hints that the end of very loose monetary policy is nigh. He stated that the “balance of risks to growth has improved” and that the ECB no longer had a “sense of urgency”. He also stated that policymakers “do not anticipate that it will be necessary to lower rates further”. The ECB also removed the reference to use ALL instruments. Bloomberg also reported that the ECB did discuss on the possibility of raising interest rates before the end of Quantitative Easing.

I am also of the opinion that the European economy is improving. The EU inflation rate (y/y) has been tracking upwards almost every month ever since it made a low of -0.2% in April 2016. It is currently at 2% (February 2017). Unemployment rate in the European Union made a high of 11% in March 2013 and had been steadily decreasing ever since. It currently stands at 8.1% (February 2017). Given the fact that inflation rate is currently at 2% and that the ECB’s mandate is to keep inflation close to but under 2%, is it not the right timing to start tightening monetary policy to maintain their price stability mandate? With steady improvements made in price stability and labour market, would it not be the right timing to start tightening monetary policy?

A point to note is that EU CORE inflation (that excludes energy and food) had not followed the trend of headline (total) inflation.

Once in a while, we get caught up in the expectations set by society; from parents, friends, and the people we come in contact with. Living by societal standards is not just exhausting, but pressurizing. At the end of the day, we are accountable to ourselves, and not others.