The Week Ahead – HLF & Pyramid Schemes

The Week Ahead – HLF & Pyramid Schemes

UK CPI for the month of February came in greater than expected at +2.3%. Expectation was for an increase of +2.1%. Previous months figure came in at 1.8%. The British Pound strengthened quite a bit on this piece of news. We will have to see if CPI is sustainable at this high level and not a one-off caused by the loss in value of the British currency due to Brexit.

US crude inventory increased another +4.945 million barrels this week on the expectation of an increase of +3 million barrels. Baker Hughes rig count rose by 21 from 631 to 652. The ball in now in the Sheikhs’ courts.

As expected, the Reserve Bank of New Zealand kept interest rates unchanged at record low of +1.75%.

Will shale continue its production or will it show signs of stalling?

Looking at the daily chart of Nasdaq 100 futures, it is observed that the support at 5385 has been broken and seem to be acting as resistance now. When peering at the weekly chart, strong support comes in at 4700.

Two things comes to mind. The hawkish Fed and incompetence of GOP (and President Trump). The Federal Reserve has raised interest rates just last week and promised to have another two rate hikes by year’s end with the objective of countering the volatility of economic growth caused by the GOP’s expansionary fiscal policies. The Grand Old Party, headed by Speaker Paul Ryan in the House, failed to pass their Healthcare bill that was supposed to replace the (Not so) Affordable Care Act (OBAMAcare). Although it was a tall order to get the bill passed in the House of Representatives, it was expected that party members will fall in line and vote in favour of the bill. However that was not to be. If the GOP failed in getting their healthcare bill passed to repeal and replace OBAMAcare, what else can they fail to do? Fail to confirm Judge Neil Gorsuch as a Supreme Court judge? Fail to cut taxes for Corporate America and the Middle Class? Fail to pass a budget that reduces the deficit? Over promising and under delivering may become a reality if they continue to stay disunited.

Having broken the $51.50 support, WTI is now taking support off the upward sloping trend line. Buying WTI at around $47.60 and targeting $51.50 will give good reward risk ratio on a bet that the price of oil will retrace after the large sell off. On the daily chart, it is observed that there are two bullish pinbars formed at $47-$48 which shows that the oil market is respecting this upward sloping trendline support.

The shale producers had been coming back online and ramping production at a breakneck pace which eats away at OPEC’s (not so dominant) market share. Will the Sheikhs step in and extend and expand their production cut agreement with the hopes that the price of crude will rise? Majority of the countries in the OPEC are nowhere near balancing their nations’ books at the current market price of crude. That includes the Kingdom of Saudi Arabia which derives 80% of their revenue from oil. The weighted average of OPEC countries’ fiscal breakeven currently stands at US$95. That would be US$47 above the current market price of WTI of US$48. To add insult to injury, President Trump just approved the construction of the Keystone XL pipeline. Several OPEC member states are currently meeting in Kuwait over this weekend with the objective of monitoring compliance. What will they do? The ball is in OPEC’s court.

Bubble popped in bitcoin land? With 1 more trading day to the end of the week, will bitcoin find a way to rally back to $1000 support or will it close at $900?

Chanced upon this video  of Jon Oliver talking about Herbalife’s pyramid scheme. Both entertaining and educational. Check out the chart below and make up your own mind. 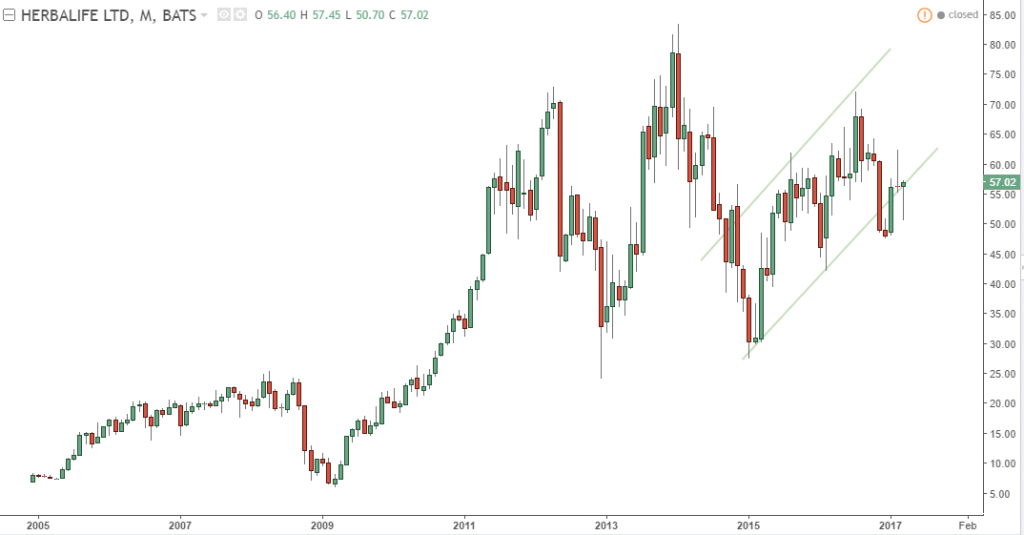