The week ahead: Election Special

The week ahead: Election Special

So the SPX has been down for 9 consecutive days. There is however some positive news under the hood. Credit spreads, a measure of risk have been relatively well behaved. In addition, copper and transportation stocks are doing well which is an indication of economic growth despite all the election shenanigans going on.

A more detailed inspection of leading economic indicators  shows a fairly robust and healthy US economy. Both manufacturing and non-manufacturing PMI’s as in growth territory, unemployment is historically low and inflation is tepid at best.

As I mentioned in last weeks note, the FBI alerted congress about new emails related to Hillary’s private email scandal resulting in the worst week for the Clinton campaign. Voters have been reminded of Hillary’s corruption and untrustworthiness just days before the election. People who voted early are reconsidering their vote as can be seen by this chart from Google Trends .

Searches for “change vote early” in the U.S are at all time highs.

In addition, Wikileaks revealed that the Clinton Foundation is structured more like a family organization in the Sopranos and is now being investigated by the IRS.

Word on the soi is that the FBI investigation of the Clinton Foundation is far more serious than crooked Hillary’s private email scandal.

Nate Silver via fivethirtyeight.com puts the probability of a Hillary victory at around 64.5%.

Sam Wong via election.princeton.edu puts the odds of a Hillary victory at 98%.

Betting odds via predictit.org puts a Hillary victory at 73%.

It seems that the consensus is strongly in favour for Hillary Clinton as the 45th President of the United States. The polls have tightened in the past week and based on realclearpolitics.com, Clinton leads Trump by 1.6% and 2.3% in the 2 way and 4 way race respectively.

However, Hillary does not have both momentum and enthusiasm on her side. Polls are trending in Trump’s favour in the closing days and his supporters are very enthusiastic.

The market is the only poll I trust and is down 4.4% since August 8th which is the 3 month mark before the election. When it is down during the 3 months prior to a U.S presidetail election, the challenger wins 86% of the time. Refer to this Bloomberg piece for more information. http://www.bloomberg.com/news/articles/2016-11-01/one-poll-that-isn-t-going-clinton-s-way-is-the-u-s-stock-market

The market has spoken and in light of all the developments around the election, if Hillary wins I believe it would be as a result of a rigged election and she will be impeached shortly after taking office. Some sort of cosmic irony at play given the impeachment issues surrounding her husband.

The markets seldom favour uncertainty and the future of U.S politics is looking like nothing but uncertainty. This Tuesday is going to determine the direction of a lot of things. Stay tuned. 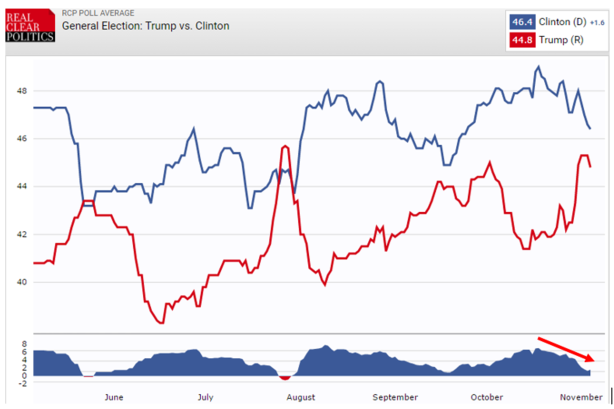 In other news, I came across a fascinating piece on how the Chinese government is planning to impose capital controls on Bitcoin.

Correlation is not causation however this chart of Bitcoin overlaid onto USDCNH confirms that something fishy is going on and the digital currency is being used to evade Chinese capital controls. Bitcoin has surged in tandem with the Yuans decline. 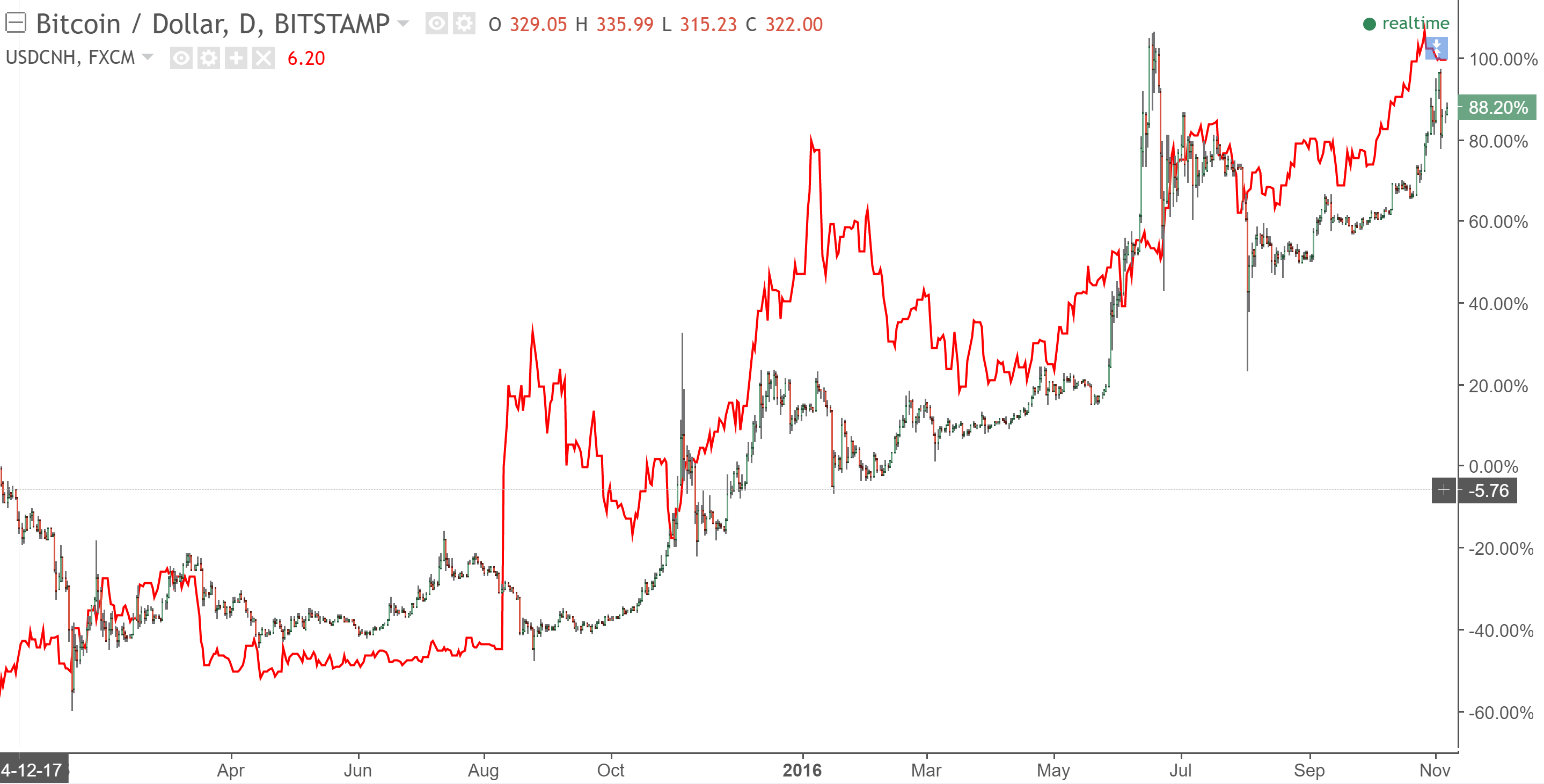 USDCNH in red against Bitcoin

The Reserve Banks of Australia has kept their interest rate unchanged at 1.50%. The summary of the whole statement was that the Australian economy is stable and growing at a slow pace. The statement seems to suggest that there is no reason to increase or lower interest rates and staying put is the right thing to do at the current point in time. AUD/USD made gains after the announcement, probably because of the technical picture and non-bearish stance the RBA is taking on the economy.

The Bank of Japan left their monetary policies unchanged as expected. The BOJ is very far away from its CPI inflation target, 2.4% to be precise.

Does the BOJ have any more ammunition to get Japan out of deflation?

Will Peter Pan Kuroda give up his fight for 2% inflation?

The Fed says that they had decided to wait for further evidence before hiking rates. Also, they mentioned that the case for rate hike continues to strengthen. They changed their stance from seeing inflation at a low level for the near term to seeing inflation rising to 2% in the medium term. Overall, it was a non-event. The December FOMC meeting is the meeting the market now expects a rate hike.

From the BOE press release: “Bank Rate held at 0.25%, government bond purchases at £435bn and corporate bond purchases at up to £10bn”. The BOE decided to adjust its monetary policy. GBP strengthened after announcement, mostly because it has been massively oversold.

Consensus expectation was for 174k jobs created in October. However, the number missed expectations and came in at 161k. September number was adjusted upwards from 156k to 191k. August number was also adjusted upwards from 167k to 176k. Unemployment rate dropped from 5.0% to 4.9%, in line with expectations. Average hourly earnings rose by 0.4%, higher than estimates of 0.3%, while September was also revised upward from 0.2% to 0.3%. Labour force participation rate dipped from 62.9% to 62.8%. As a whole, the jobs market does seem to be stable and moderately strong. In my opinion, the consistently moderately positive jobs data does support a rate hike in December

The Reserve Bank of New Zealand has been lowering interest rates since June 2015. It has taken interest rate down from 3.50% to 2.00%. Expectations are for another quarter point drop in interest rate to 1.75%. However, I am inclined to believe that they will keep rates unchanged at 2.00% because its economy have stabilized and have not seen much deterioration in recent times.