The Week Ahead – Inflation is coming

HomeGeopoliticsThe Week Ahead – Inflation is coming

The Week Ahead – Inflation is coming 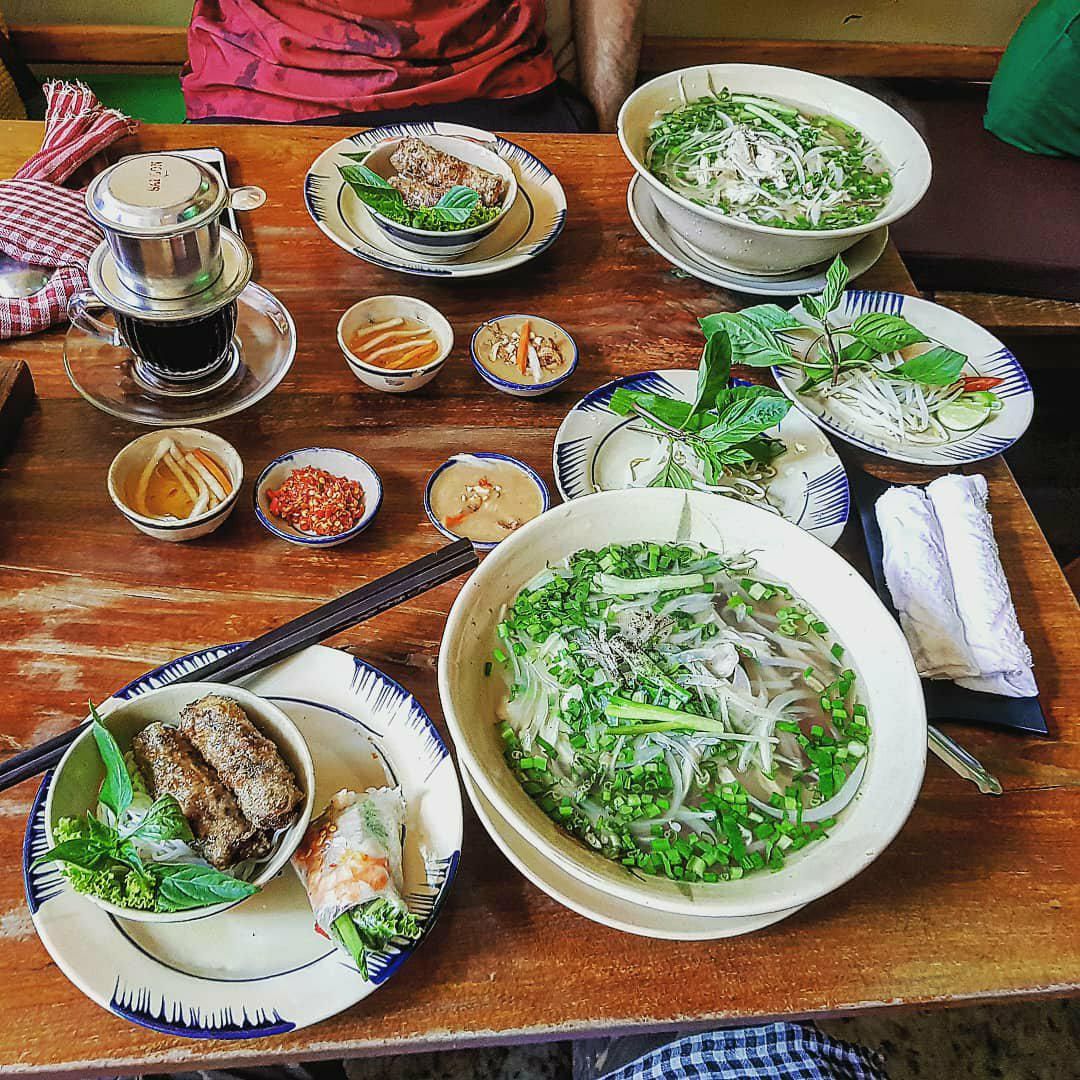 The opening few months of 2018 have seen the return of volatility to global financial markets. It is important to stress that US economic fundamentals have remained broadly the same. The rise in Treasury yields are a healthy development as long term rates have been too low relative to the strength of activity in the US economy and globally. I still believe the outlook for the US economy remains constructive with little evidence of overheating. Additional bouts of volatility should not be feared.

Inflation is coming and the charts below of the Steel ETF (SLX) and the Agribusiness ETF (MOO) show price action at breakout levels. This cyclical uptuen in global growth is translating into normal levels of inflation and interest rates. Reverting to the old normal i guess. 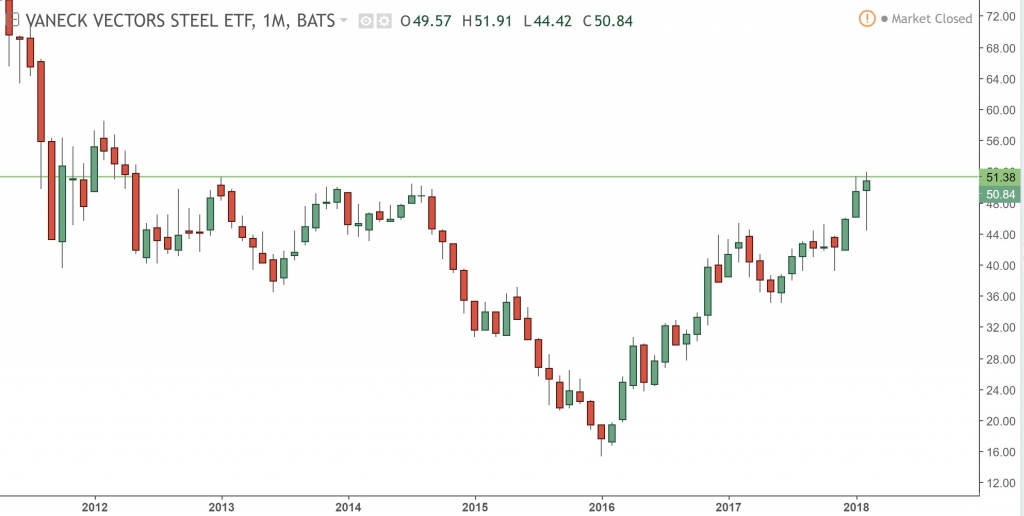 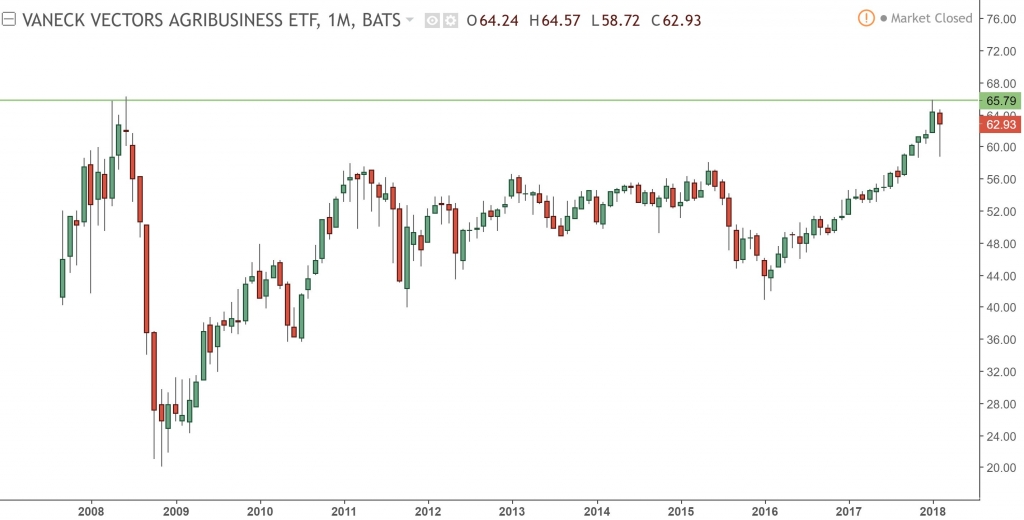 Weak (gradual) inflation continues to keep the central bank from tightening their monetary policy. Just a reminder, “the appropriate target for monetary policy in Australia is to achieve an inflation rate of 2–3 per cent, on average, over time.”

From the minutes for meeting dated 6 February 2018 with regards to inflation:

Summary: Inflation will rise! Economic growth is strong! Labour market is tight! We don’t have a clue on wage growth. Further (and not faster) gradual policy firming would be appropriate.

This is a fact based on hard historical data, not an opinion of members of the committee.

This is a prediction by the committee. They believe / forecast / expect / anticipate that inflation will rise in the coming year and settle around 2%.

A few participants read the inflation tape and called the bluff of the majority. Core PCE inflation had never been at or above the 2% target for a sustained duration since the Great Recession. The opinions of the minority is duly noted but it does not change the current narrative of the majority, which is everything is beautiful and rosy in inflation land.

“Almost all” participants see inflation rising towards the 2% target. “Several” said “recent developments had increased their confidence in the outlook”. I suppose these “recent developments” refer to recent tax cutting law. “A couple” thought that economic growth will be so robust that inflation will overshoot their target. “Some participants” thought that inflation will remain tepid and will fall short of their target.

Committee’s discussion on the economy:

The economy is STRONG!!!!

The committee’s does not have a consistent opinion on wage growth, probably because they do not have a handle on this issue at hand. Their business contacts / friends (on the street called Wall) says wages are rising. However hard data provided by the government disagrees. There is “few signs of a broad-based pick up in wage growth in available data”. “Few participants” say that employees will receive a one-off temporary bonus and not permanent wage rises. How about the other participants’ opinions? What are their opinions on tax savings boosting compensation? Despite the importance of the tax cuts to wages, none is mentioned by the committee apart from a “few participants”. “A number of participants” continue to believe that the tightening labour market will lead to rising wages “at some point”. When will that ambiguous point be? 2018? 2019? 2100? On what basis are they basing their opinion / hope on? The hard data in their own words showed “few signs” of wage growth. In the words of President Obama, “I still believe in hope”. Keep having this mentality and Brexit states (Wisconsin, Pennsylvania, Michigan, and Ohio) will continue staying Red.

From Zerohedge / Bloomberg: “Further” does not equal “faster” in the FOMC minutes… at least not in 2018. Policy makers appear willing to maintain their projected pace of three rate hikes this year, but perhaps to extend this pace further into the future in light of stronger growth prospects due to fiscal policy.

US crude inventories DECREASED by -1.616 million barrels on the expectation of +2.35 million increase. Baker Hughes US oil rig count increased by 1 from 798 to 799. Oil production was 10270k barrels per day for week ending 16/02/2018, a decrease from 10271k barrels per day in the previous week. US Oil production still remains at / near all time and have just overtaken Saudi Arabia and is expected to overtake Russia in due time. The rise in rig count is attributed to the strong correlation to the price of oil. The head on battle between US and OPEC continues. Frackers are churning out their rigs while OPEC is keeping a lid on production. 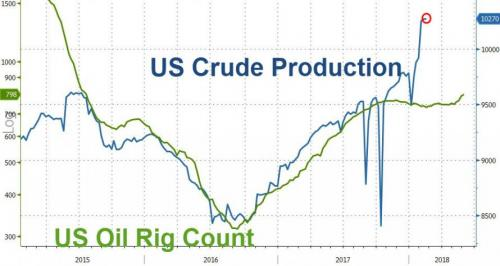 Japan core inflation, or the lack of

US embassy to move to Jerusalem in May

Quoting the first line of the CNN article: “The Trump administration will move its US Embassy in Israel from Tel Aviv to Jerusalem in May, the State Department announced Friday, coinciding with Israel’s 70th anniversary.” Two state solution is no more. It is now a one state solution even if the State of Palestine is a current non-voting member of the United Nations.

On the weekly chart, USD/CAD seem to have hit a resistance at 1.27. The rising price of crude oil will provide tailwind for the Canadian Dollar to strengthen.