Benchmark global oil prices have increased roughly 19% year-to-date and 39% over the past year, hitting the highest levels since 2014.1 Brent crude oil, the global benchmark, has reached US$80 a barrel while West Texas Intermediate (WTI), has passed US$70/bbl.

A host of factors have caused the surge in oil prices. Positive economic factors have led to increased demand, and a multi-year overhang in the developed world’s petroleum stockpiles has recently been eliminated due, in part, to producer curtailments.

And in addition to strife in the Middle East—including the US withdrawal from the Iran nuclear pact—the continued decline of Venezuela’s oil production heralds another trouble spot. Venezuela’s economy has entered into a protracted state of collapse and talk of fresh US sanctions is bubbling up.

OPEC also boosted its demand forecast for this year, while trimming its outlook for global oil production.

A Return to $100 Oil?
While there’s been speculation about the price of oil moving back up to US$100/bbl, I find it unlikely on a sustainable basis, considering growing US production and exports, combined with OPEC’s ability to offset export losses from Venezuela and Iran.

We shouldn’t forget that it wasn’t too long ago that market pundits and some well-known Wall Street firms were predicting oil prices would remain no higher than US$50/bbl through the end of the decade, a view we never shared.

Although one cannot rule out a short-term spike in oil prices, particularly given the influence of traders, a significant rise in oil prices will likely prove counter-productive for producers as additional non-OPEC production is incentivised and demand curtailed.

OPEC and non-OEPC producers will meet in June to assess market conditions and will likely discuss a tapering of production curtailments in order to maintain market balance now that global oil inventories have declined to the five-year average. To be sure, any reduction in Iranian exports could have an outsized impact on the oil market, which has become tighter amid higher demand and OPEC’s concerted effort to restrain production, but other OPEC members appear willing and able to offset any reduction in supply.

We have already seen some media outlets reporting that OPEC and Russia may be looking to boost production, largely to offset lost production from Venezuela and other struggling OPEC members, which should not be a surprise given inventories returning to five-year averages and the potential for further declines related to Iran sanctions. The news helped pull oil prices off their peaks heading into the Memorial Day weekend.

In addition, the latest weekly data on US oil rigs showed an increase, bringing the total rig count to 1,059, which also points to a further production rise.2 The news helped pull oil prices off their peaks heading into the Memorial Day weekend.

Inventories declined counter-seasonally in the first quarter and are expected to see further reductions as refineries come back on-line from seasonal maintenance. In fact, one of the clearest signs that oil markets were over-supplied in 2014 were stable inventories at a time when they should have been drawing down, and this past quarter we witnessed the opposite trend—flat inventories when they should have been building, likely signalling supply shortages,which suggests additional production from OPEC and other producers is needed to maintain adequate inventories and avoid a spike in oil prices.

Impact of Iranian Sanctions on Supplies
There has been a bit of speculation about just how big an impact on the market renewed sanctions on Iran will be. From what we’ve seen, predictions range from a couple hundred thousand up to one million barrels per day (mb/d). Although Iran may find other buyers for its crude and the sanctions don’t go into effect for 180 days, we already see anecdotes of shipping curtailments driven by insurance availability, which had a significant impact when sanctions were in effect previously.

So even if Iran finds willing buyers, transporting the oil may be problematic. In addition, though European countries are apparently committed to maintaining the nuclear accord, oil and gas companies domiciled in Europe or elsewhere that have assets or trading exposure with the United States are unlikely to risk running afoul of the US government for fear their actions could have a much more meaningful negative impact than any benefit they’d receive trading with Iran.

In our view, much of this hinges on how aggressive the United States chooses to be with respect to enforcing sanctions and providing disincentives for those willing to continue doing business with Iran.

In addition, the lack of investment in Iran that could accompany sanctions is worth noting. French major integrated producer Total already stated it will halt investment on the giant South Pars natural gas field and on onshore oil developments, which could impact Iran’s productive capacity longer term. 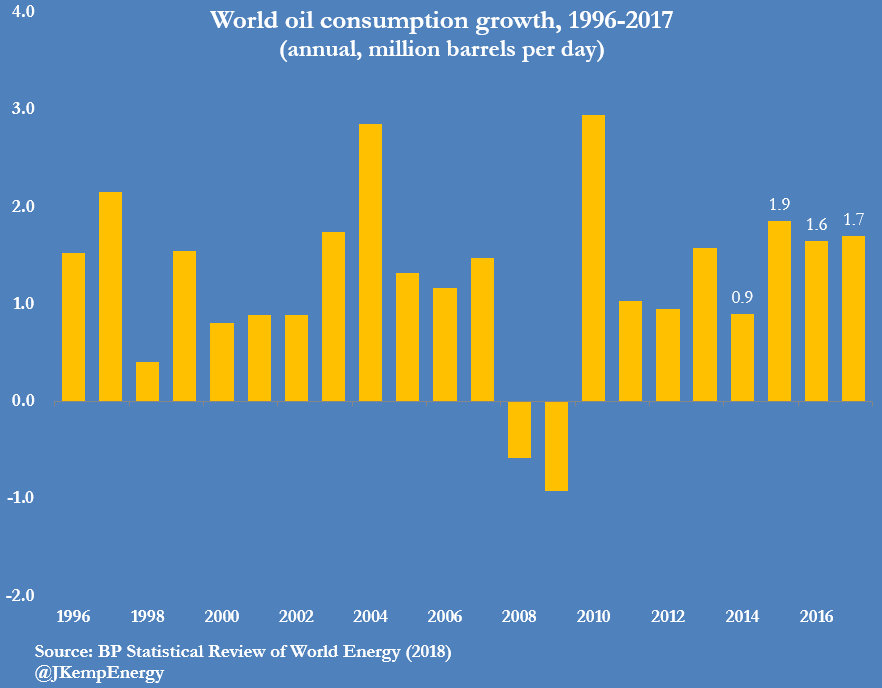 A Look at Global Supplies
Several large developments around the world are contributing to supply. These include operations in Kazakhstan, Brazil and the North Sea, although many are simply replacing production lost to mature field declines.

Natural field declines have historically been about 3-5% of global supply, which means the industry has to produce an additional 3-5 mb/d per day on top of 1-1.5 mb/d to meet incremental demand, a herculean task we think most industry observers don’t appreciate.

While newly developed fields, maintenance deferrals and technological advancements have allowed the industry to maintain adequate supplies, this may be set to change by next year when incremental supply from long-cycle projects is expected to be half of that realised in 2018.

Field depletion and decline rates are the silent factor that can lead to much tighter supplies than expected as they literally occur “below the surface” and producers are loath to admit they are facing declines. Meanwhile, fears of too much supply over the past three years likely exacerbated this effect through limited investment. We believe this will become more obvious by next year and potentially strain the ability of OPEC, the United States and other producers to keep global markets well supplied, which should be supportive of oil prices.

US Production Defying Sceptics
US production is important for a few reasons. The Permian Basin, which straddles parts of Texas and New Mexico, has experienced the biggest increase in drilling activity and production over the past 1-2 years. The ability of the United States to export oil has defied many sceptics and has recently been reaching record highs of more than 2.5 mb/d.2

However, the Permian Basin region is currently experiencing well-publicised bottlenecks in service capacity, largely due to a lack of labour availability, logistical issues such as shortages of sand used for fracking, and limited transportation capacity that is manifesting itself through higher sales price differentials that have reached as much as US$15/bbl. As a result, some producers were recently receiving only US$57/bbl for their oil rather than the US$72 spot price, which makes a significant difference in cash-flow availability for reinvestment.

While these issues will likely be worked out over time, the region could face production limitations at the time when the rest of the world was expecting the United States to keep markets well supplied, an obvious risk when relying on a single basin.

US exporters are exporting as much as they can now, because they can fetch higher prices internationally considering the wide price gap between WTI crude versus Brent. The rise in exports has been spectacular.

As recently as a year ago, some oil-market pundits were suggesting that the United States could not export more than 1.6 mb/d versus a recent high of more than 2.5 mb/d and an average of 800,00 bbl/day in May 2017.3 And, more capacity is currently under construction. The fact that demand outside the United States exists for such a large increase in supply is impressive, signalling that world demand remains robust and that the above-mentioned decline rates may already have been more pronounced than expected.

Overall, this year’s price climb has completely upended analysts’ late-2017 and early 2018 predictions. I think this is important to mention, as oil price predictions have often tended to be wrong.

Why have they been so wrong? We think it’s likely a lack of understanding of global trends driving per-capita consumption, including population growth and burgeoning middle class combined with a lack of appreciation for decline rates in mature fields and the impact of investment curtailments. Half the world’s population consumes a fraction of what the developed world does, and while efficiency will likely limit consumption, it has a long way to go.

In our view, it’s likely what are viewed as demand destructors—such as electric vehicles—will be required in order to allow increased consumption by some at the expense of wealthier nations. And somewhat ironically, fears of demand destruction and the potential for lower prices are limiting investment, which we believe will be manifest in steeper decline curves and lower supply. 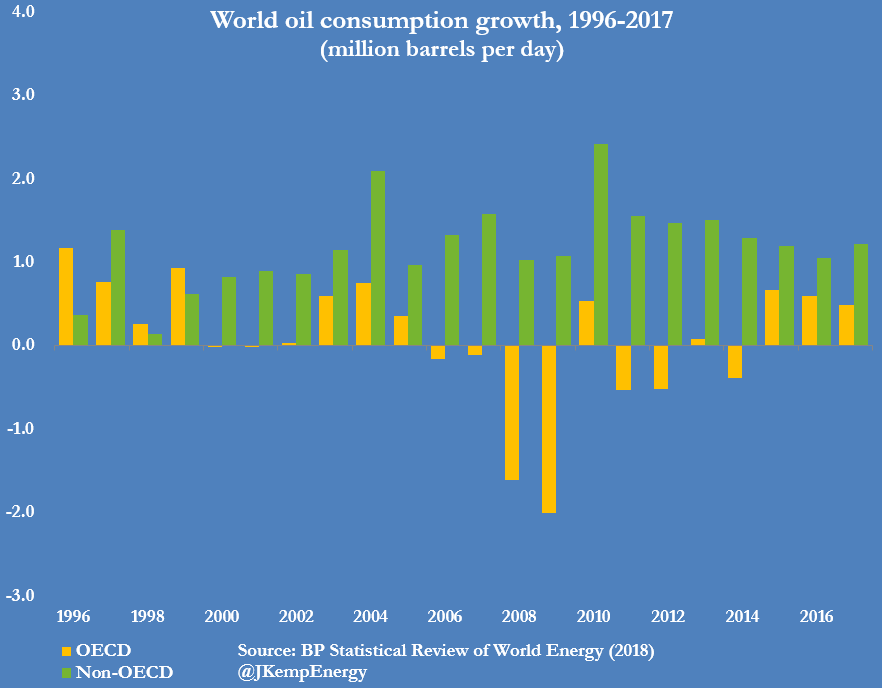 The Implications for Traders
While oil-price surges make for dramatic headlines, I think it’s important to emphasise that from a trading perspective, higher oil prices are not necessarily required for all companies in the sector to perform well. Many possess the ability to grow strongly as long as prices are at a healthy level, and that’s where we are focused. It’s a common misunderstanding that an investment in energy companies is a bet on rising commodity prices. Of course, it helps and can pull value forward, but is not necessary.

Today, it seems like oil companies have flipped from market dark horse to market darling—but I remain focused on companies that have potential to grow their earnings, even if oil prices remain near current levels. In addition, short-term periods of weakness can create buying opportunities in high-quality companies, which our opportunistic strategy seeks to exploit. 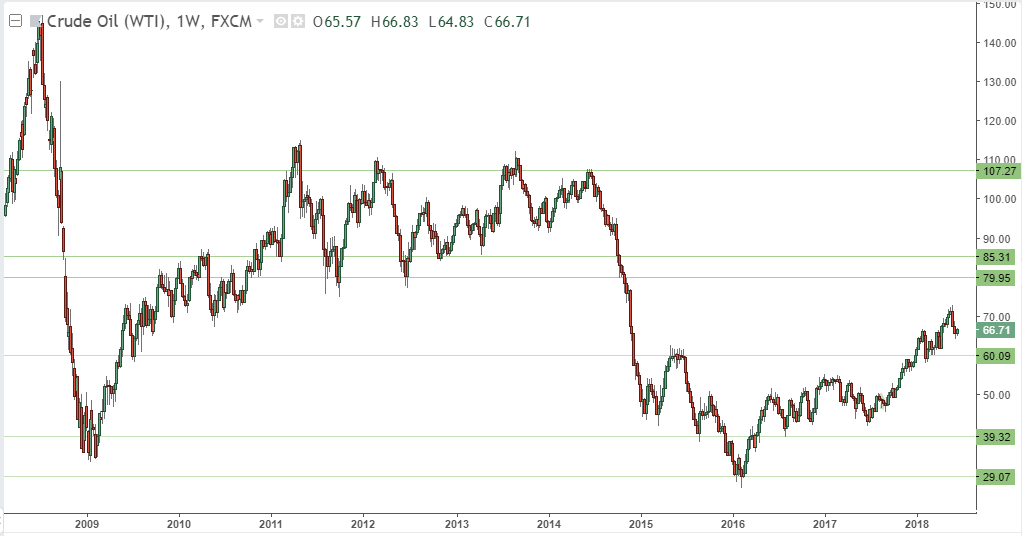