After the last two months of weak NFP figures, it appears to be “bye bye Fed Funds Rate Hike! See you next year!”

The Federal Reserve was considering hiking rates in September, but didn’t due to the weak NFP numbers.

September was expected to see an additional 171K individuals employed, excluding the farming industry, but only saw 156K. 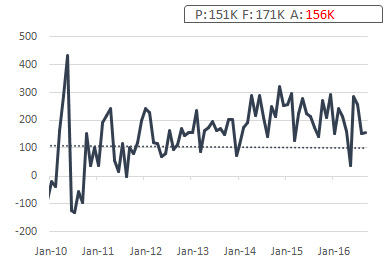 The total percentage of the unemployed workforce in the US increased by 0.1%.

August and the forecast for September was an unemployment rate of 4.9%. However, this increased to the still healthy level of 5.0%.

Adult men (20 and over) saw their unemployment rate increase by 0.2%, while Black and African Americans increased by the same rate. 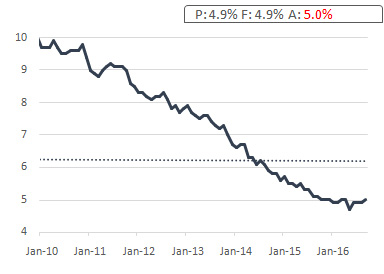 In September, the average hourly earnings of all employees increased by 0.6 cents, to 25.79 USD.

In percentage terms, the average hourly earnings increased exactly as expected by 0.2%.

This follows August’s increase of 0.1%, while YoY, average hourly earnings increased by 2.6%. 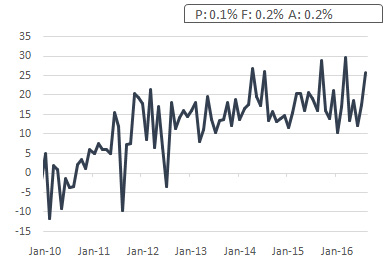 Wholesalers saw -0.2% less goods held in inventories throughout August, lower than the forecast of -0.1%.

The Commerce Department reported that businesses ran down their stocks of farm goods and general clothing.

Excluding automobiles, wholesaler inventories declined by -0.3%, while sales at wholesalers increased by 0.7%. 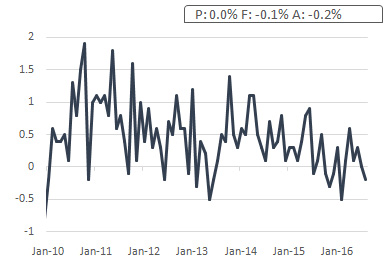 Consumer credit surged by 25.9B USD in August, higher than the forecast of 16.8B.

The 8.5% gain in consumer credit was driven as everything from car loans to credit cards picked up. 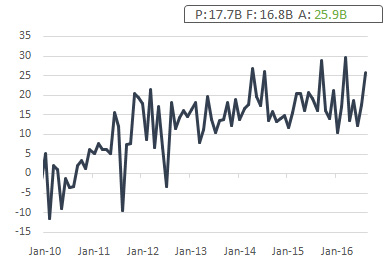 Canada’s unemployment rate remained unchanged in September, and came in exactly as expected at 7.0%.

YTD, the Canadian unemployment rate has fluctuated between 6.8% and 7.3%, so September’s release is somewhat the mean of 2016. 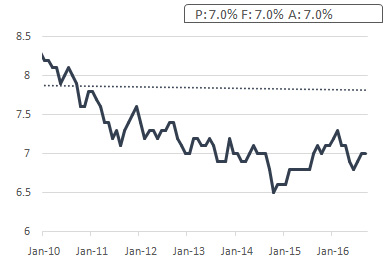 Business conditions in the Canadian manufacturing sector soared to a 9 month high in September.

All constituents except inventories saw gains in September, with Employment expanding from 46.9 to 54.0, and Supplier Deliveries from 46.1 to 51.7. 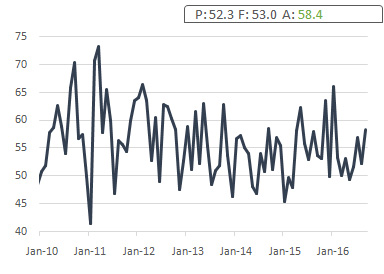 Output from the production sector acted as a drag on economic growth, declining by -0.2% in Q3. 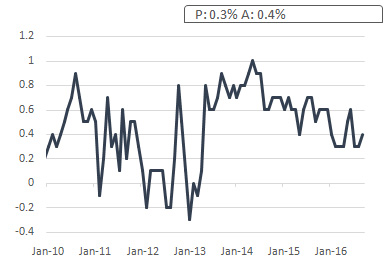 Housing prices financed by the HBOS increased by 0.1% in September.

September was estimated to see no change (0.0%) from August, while August saw prices decline by -0.2% from July.

The annual rate of change saw the average price of homes increase 5.8% to 214K GBP, while Q3 saw house prices decline by -0.1%. 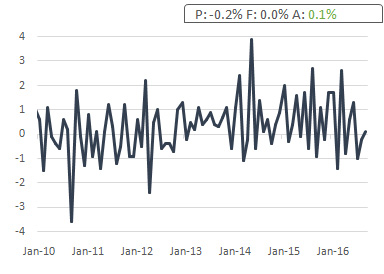 Manufacturing production in the United Kingdom came in weaker than forecasted in August, and only saw a 0.2% increase. 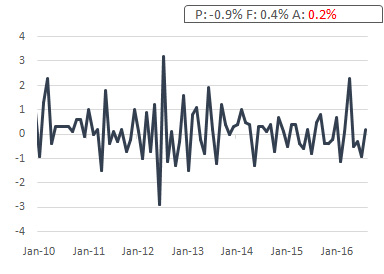 Industrial Production in the UK declined by -0.4% in August, following July’s increase of 0.1%.

The fall in mining and quarrying partially offset a rise in manufacturing. The largest contribution came from water supply, sewerage and management output, increasing by 7.0%. 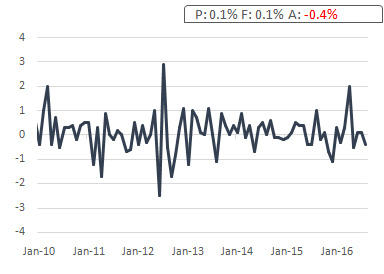 The difference in value between imported and exported goods in the UK saw a deficit of -12.1B GBP in August.

This was reflected in an increase of exports by 0.1B, while the weak pound caused import prices to surge 2.7B to 37.9B.

Material Manufacturing prices rose by 0.3B, while ship and oil prices fell by 0.2B and 0.3B respectively. 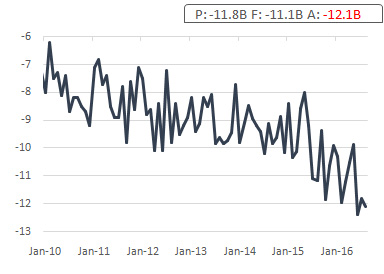 Energy production was up 1.1% in August, however, this was offset by the decline of -1.2% in the construction sector. 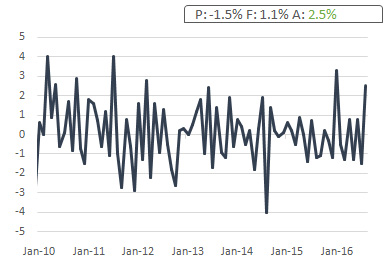 The difference between the French governments income and spending for 2016 decreased to a deficit of -96.0B.

This follows July’s deficit of -80.8B, August saw expenses outweigh the central governments income by -15.2B EUR. 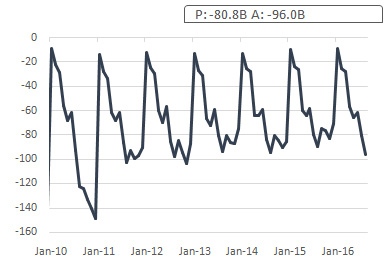 The difference in value between imported and exported goods was released exactly as expected in August, which saw a deficit of -4.3B.

July saw a deficit of -4.5B, however, the long term trend indicates that the trade balance is edging towards a surplus. 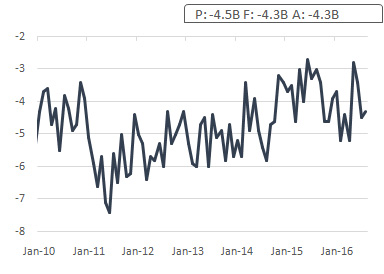 Industrial Production increased by 2.1% in August, following July’s decrease in production by -0.6%.

Output of pharmaceuticals decreased by -3.1%, and low oil prices caused petroleum products to decrease by -1.0%. 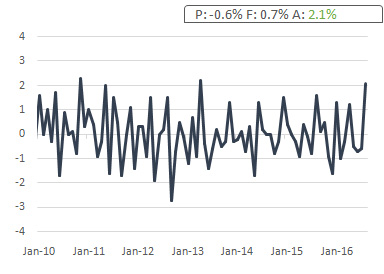 The Japanese Average Cash Earnings YoY was expected to see a third consecutive month of growth, with incomes expected to increase by 0.5%. 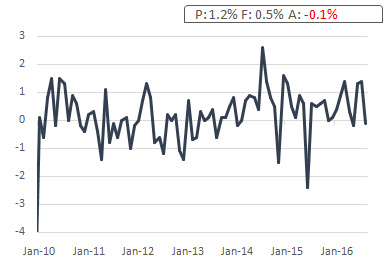 However, the index increased weaker than forecasted, and was released at 101.2. 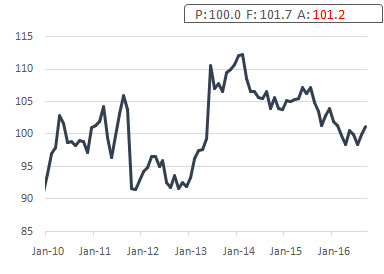 Monday is opening the week fairly quietly, due to Japan, Canada and the United States all seeing bank holidays.

China is scheduled to release their M2 Money Supply YoY and New Loans as some point this week, while Italian Industrial Production is forecasted to decrease by -0.2%.

European Investors and Analysts are set to be more optimistic in regards to business conditions in October.

The European Sentix Investor Confidence was previously released at 5.6, and October is expected to see an increase in confidence to the index level of 6.2.

The survey asks respondents to rate the relative 6-month outlook for the European Area. 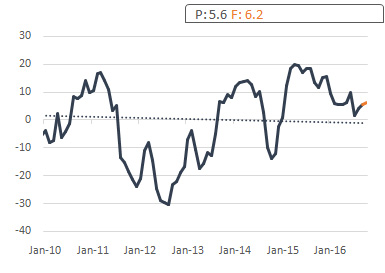 The surplus on German Trade is expected to decrease from 19.4B to 19.3B in August.

Despite this, the difference in value between imported and exported goods is well above the long term trend. 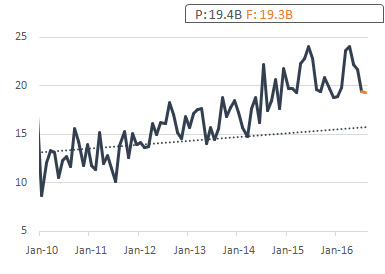