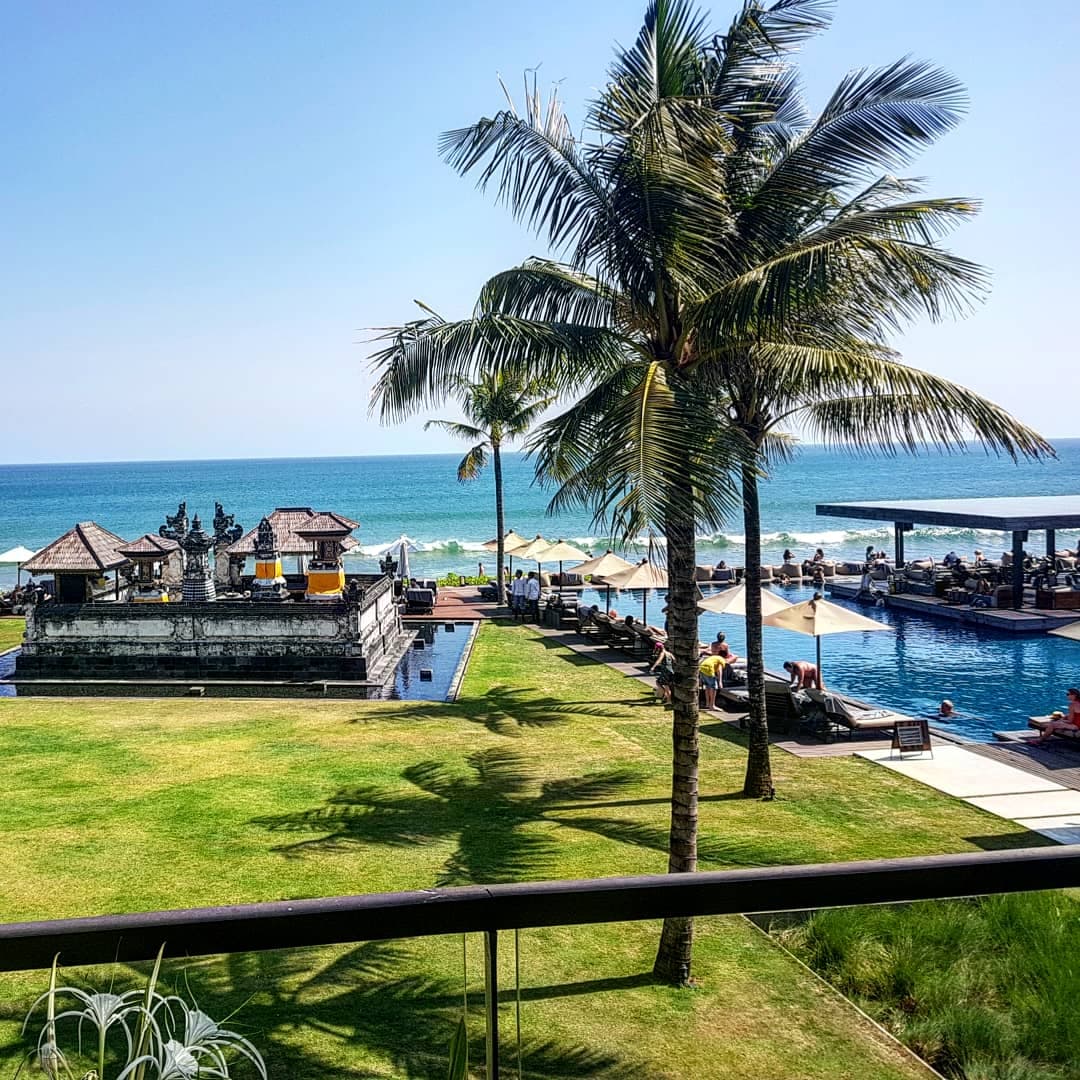 Greetings from sun kissed Bali. As the world burns it seems fitting to take refuge in the island of the gods. An interesting week ahead with the USD looking to maintain its recent run of gains with the Bloomberg USD index having rallied for five consecutive weeks for the first time since 2015. 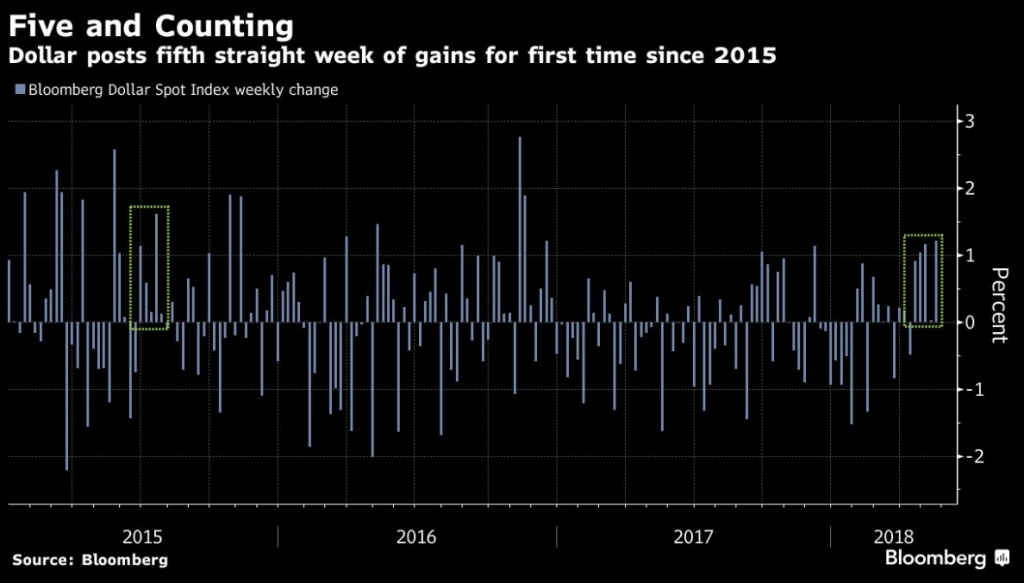 The latest lift in the greenback and boost to US index futures comes amid a further de-escalation in the US/China trade war after US Treasury Secretary Steven Mnuchin saying at the weekend that “we’re putting the trade war on hold”. However, how long this conciliatory phase will last is up for debate with many seeing this as purely a political manoeuvre to get China on side to help broker smooth talks between the US and North Korea in mid-June. 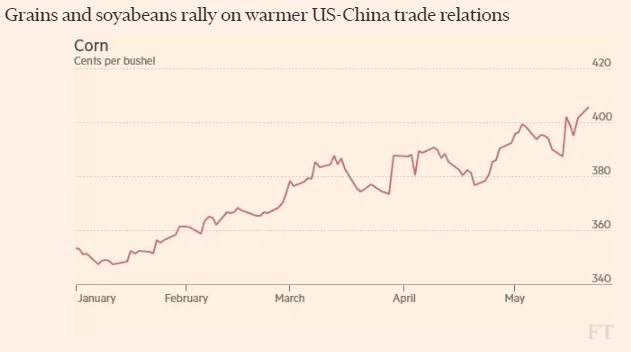 Beyond this, it’s also worth remembering that the US Midterms loom large towards the end of the year and the return of renewed anti-China rhetoric in time would not be a surprise. As such, I think it’s important to see this in reference to the political timeline to gain a sense of how the Trump administration is likely to play trade and foreign policy, and consequently its implications on the USD in the months ahead. If the 2016 Presidential campaign served as any guide then I would expect to see US/China tensions flare up again closer towards November as Trump looks to re-galvanise the working class states where the ‘American First’ mantra resonates the most.

The Royal Wedding was a resounding success but while the UK basked in the sunshine the Prime Minister has had to deal with the latest press speculation that a number of Tory MPs are bracing for a snap election as ministers remain at loggerheads over sticking point of the Customs Union. To me, despite the overwhelming negative nature of headlines surrounding the government I do feel the GBP weakness is looking a little overdone. The main development last week was that it is looking increasing likely the transitional period will be extended beyond December 2020, and with the perception of BoE rate hikes now substantially repriced, I feel a lot of the ‘bad’ news’ has now been factored in.

“Morgan Stanley is relatively optimistic on Britain’s exit from the European Union, putting the probability of a so-called soft Brexit as high as 75 percent” – 17th May 2018

Addressing the Sunday Times headline on a snap election, the odds at the bookies this morning is 6-1 that May departs in Q4 this year, but in reality I don’t think her departure really changes the end game. By this I see the Brexit negotiation being an incredibly drawn out affair and despite any short-term negatives derived from political uncertainty, in the long-run the end result is still heavily tilted towards a soft-Brexit.

More on this to come I’m sure and European finance ministers reconvene in Brussels on Tuesday ahead of the Eurogroup summit at the end of the week. As per usual the Customs Union and North Irish border remain the keys topics of discussion. 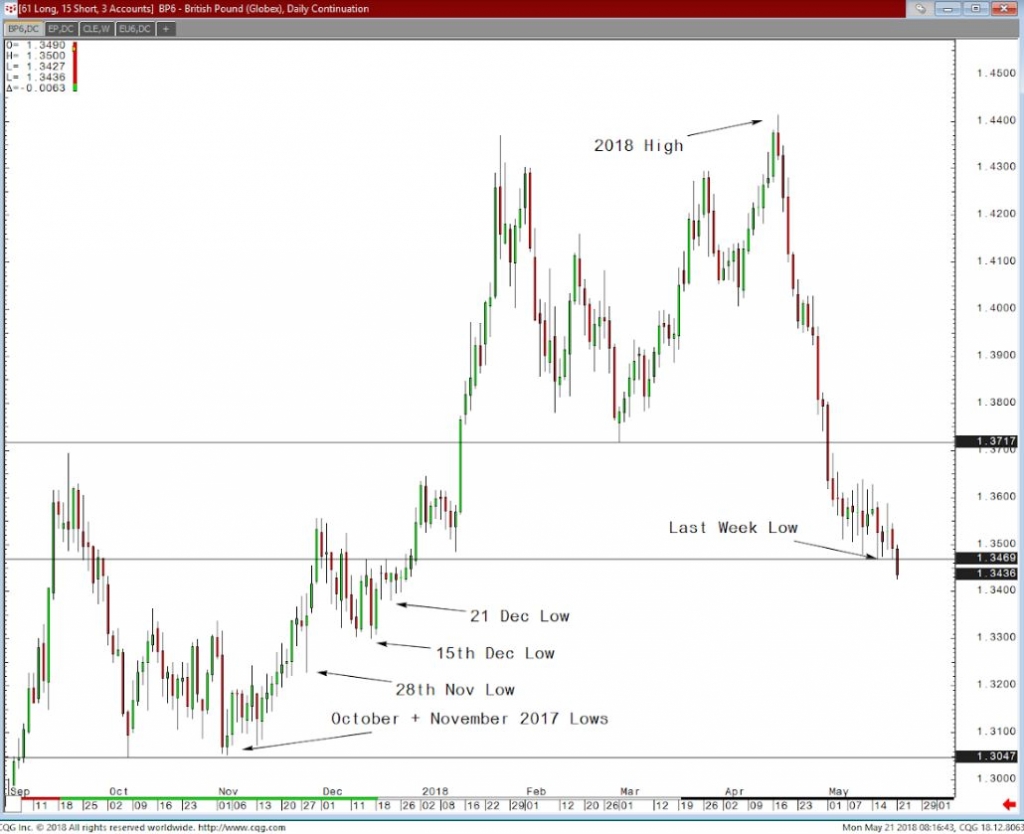 From a practical point of view there are several data points to navigate this week of which CPI (Weds) Retail Sales (Thurs), and 2nd reading of Q1 GDP (Fri) headline. In addition to this, Governor Mark Carney is also appearing at a Bloomberg event on Thursday.

Although, the consensus is still for another small fall in Y/Y CPI, analysts at Deutsche Bank note the recent Sugar Tax Levy and April price rises by the big six energy retailers may contribute to an upside surprise. Meanwhile the pre-indicators of UK retail activity for April (BRC Sales Monitor, high street footfall and Visa’s Consumer Index) have all been on the weak side. Rounding off the data set is the second reading of Q1 growth of which the advance reading disappointed and history tells us the revisions do tend to have an upward bias.

Are market complacent over Italian risk?…

EUR/USD and BTP’s remain under pressure this morning as the prospect of a tie-up between the Five Start Movement and League becomes closer to a reality. From a EUR perspective this has taken away some of the emphasis on European economic data and for this week any headlines regarding the party proposals need to be monitored with some vigilance. 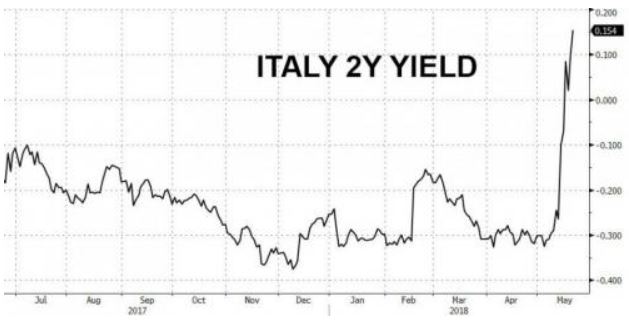 Notable macro strategist, Mark Cudmore of Bloomberg, makes an interesting argument on how the Italian situation is on the verge of spilling over into a major dominant theme for financial markets. The summation is the proposed economic policies being tabled make no attempt at debt sustainability which of course is a big concern for a country who has the second largest absolute debt pile in the EU, behind only Greece. These concerns have been clearly evident in the Italian yields of late. 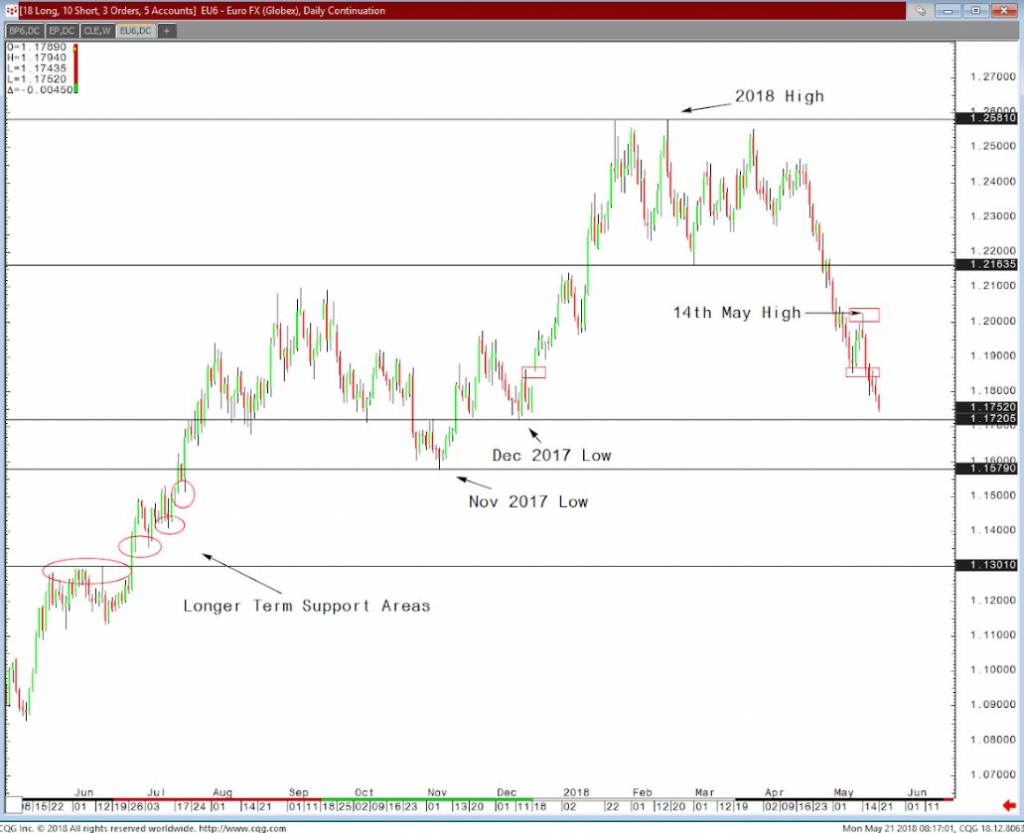 Wednesday evening we get the latest FOMC minutes where attention will be on the discussion surrounding inflation. Small tweaks to classify prices as having “moved close” to 2%, and the word “symmetric” with regard to the inflation target will be particular points of interest. Away from this there are a plethora of Fed speakers littered throughout the week, but for the here and now, the positive nature of the ‘trade truce’ at the weekend is keeping US equity futures buoyant. 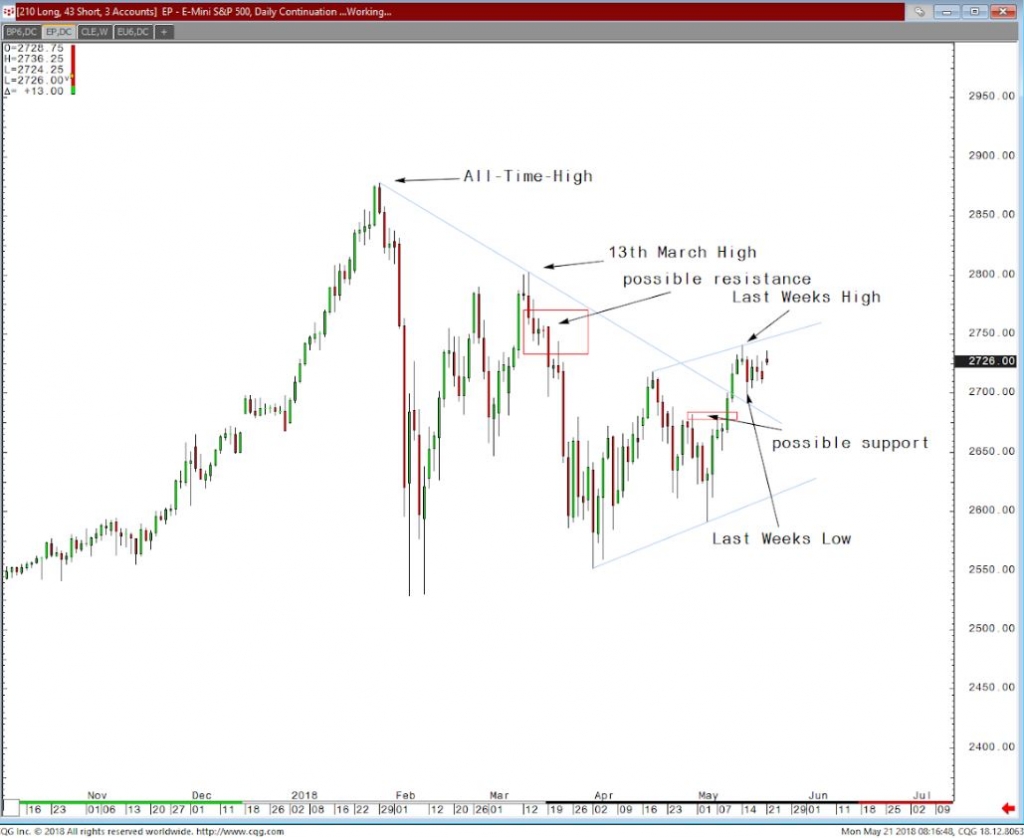 Oil below. A picture speaks a thousand word’s. 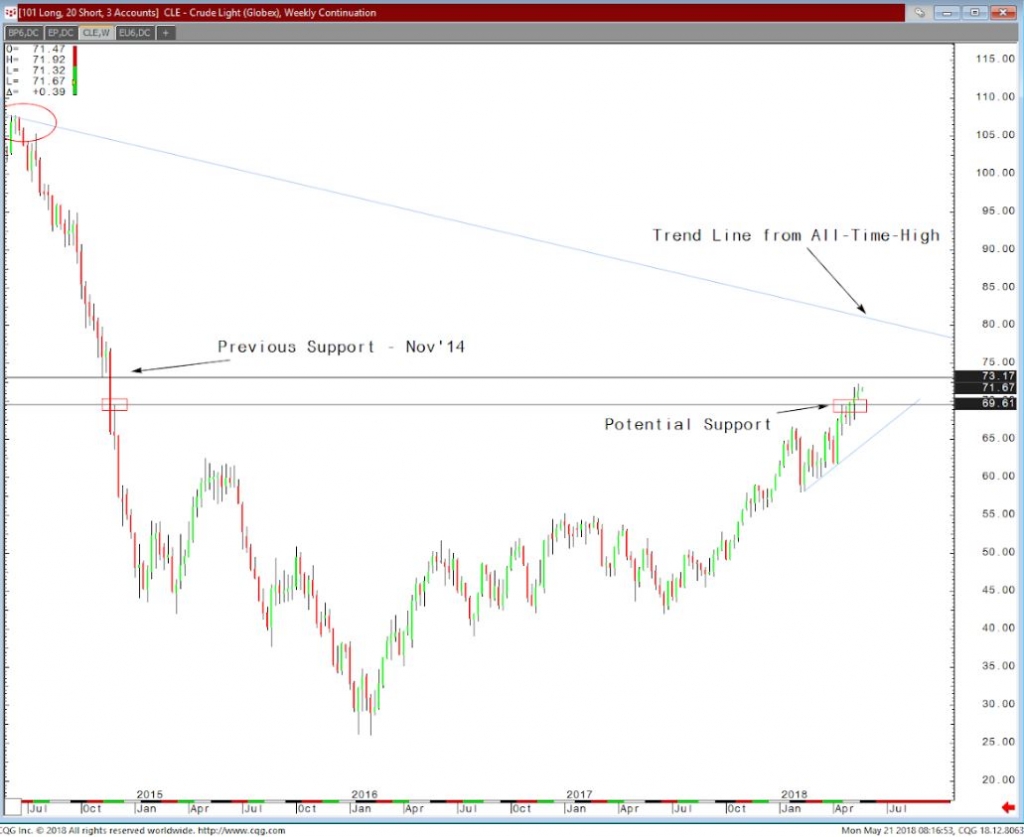