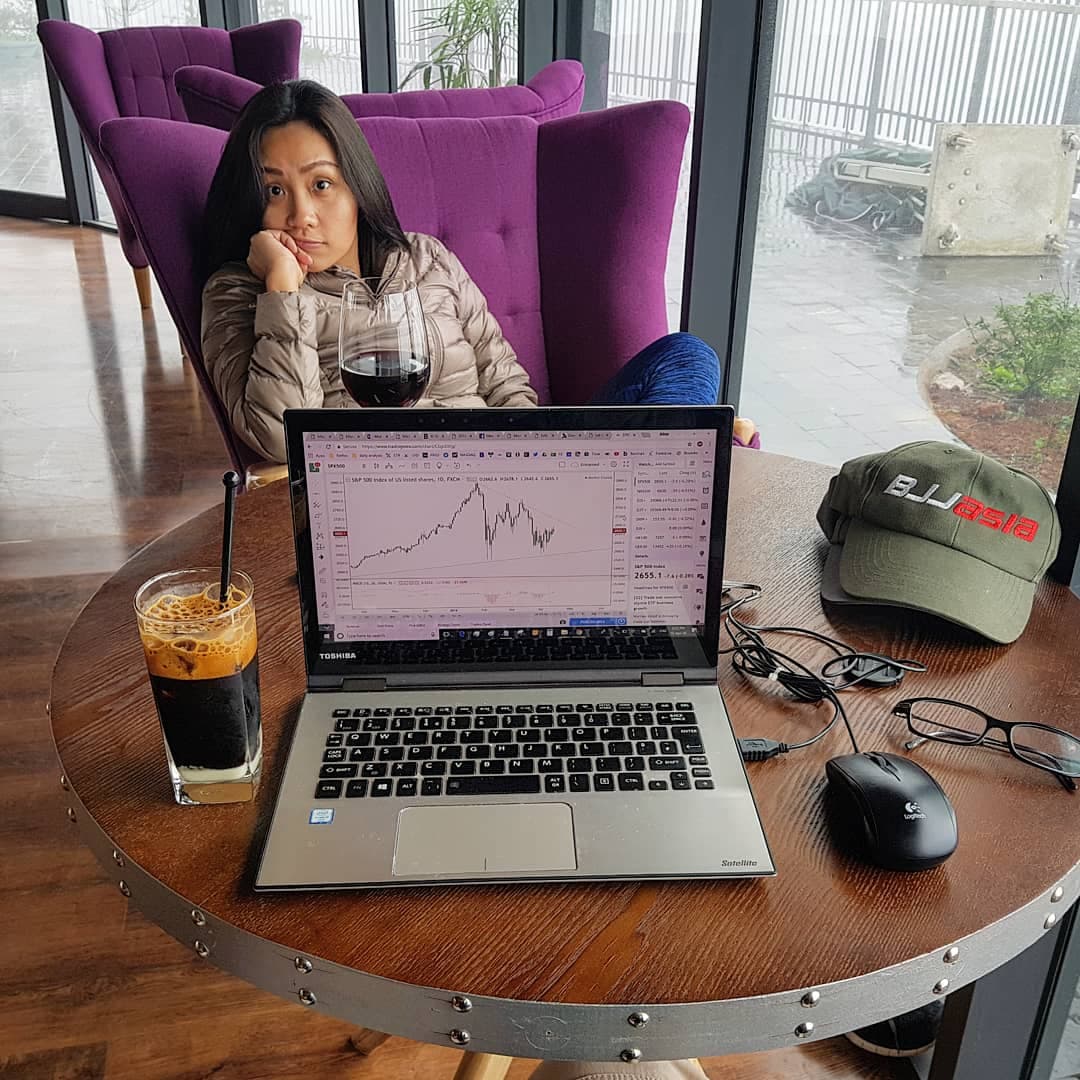 Last week started with talk of the United States increasing its sanctions against Russia, alongside retaliatory threats from Russian President Vladimir Putin. There was also a joint US-UK warning about Russian cyber-attacks. The aluminium chart below speaks for itself as sanctions were brought against Rusal, a major producer of the metal alloy. Turns out that the largest importer of aluminium is the US. Another shot in the foot of the Trump presidency. 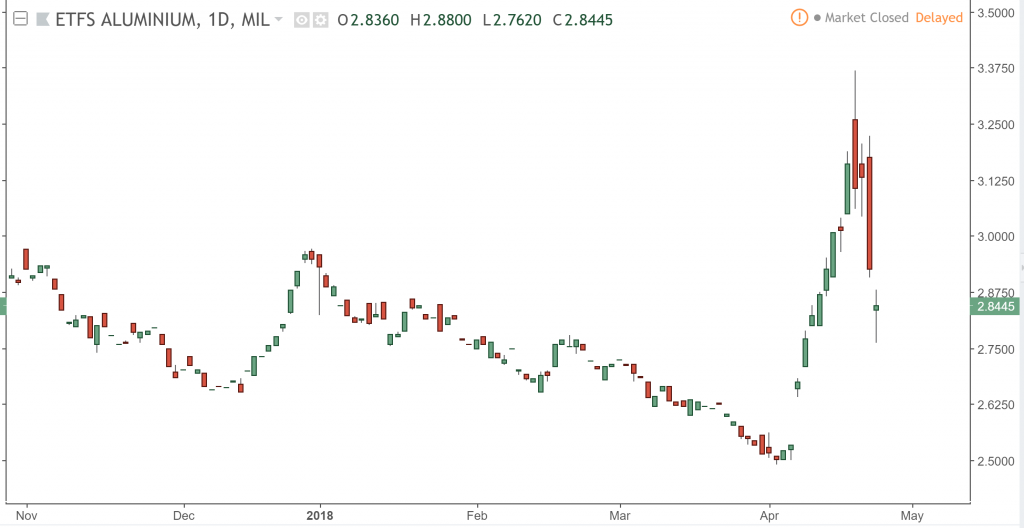 Trump has since chosen to put the new Russian sanctions on ice. It remains to be seen if this marks a permanent change in direction from the US president.

Meanwhile, the United States did reveal it was considering a law to curb Chinese investment in US technology. This decision came after the United States imposed a seven-year ban on China’s second-largest telecom equipment firm purchasing any US hardware or software.

Trump also accused Russia and China of devaluing their currencies, just days after he talked down the US dollar himself. His accusation had little real impact on equity markets, given that China has made no secret of their willingness to use currency manipulation as a tool should trade wars escalate.

China’s first quarter GDP growth came in at a decent rate of 6.8%. Still, a surprise cut in the reserve requirement ratio from the People’s Bank of China  and under performance in Chinese equities could lead some to speculate that trade-war fears were at play.I believe it will be important to monitor the PBOC’s actions as well as macro data from China going forward.

Lots of headlines about the US 10 year treasury breaching 3% however  i don’t think this bit of news warrants all the attention it is getting. We last breached this level in 2014 and it is worth noting however the question remains, how long can we stay above 3%. The difference between 2.99% and 3.01% is only 2 basis points so the importance of 3% is more psychological than anything really. From a technical perspective, 3.05% is key resistance. I don’t really see much potential for a run to the upside until some key events take place notable the ECB, ECI, PCE and refunding announcements later this week. Volatility is rising which means that price action will continue to be choppy.

So how would we trade this move? Firstly is this a breach or a correction? Right now we have a daily close above 3% however I would wait for a weekly close which is a stronger signal. In addition, with risk assets in negative territory since the start of the year any further upside in yields seems capped for now.

The following chart is from my good friend Jon Lai. He overlays a TD count and Elder impulse on the daily yield. Caution is advised based on this metric. 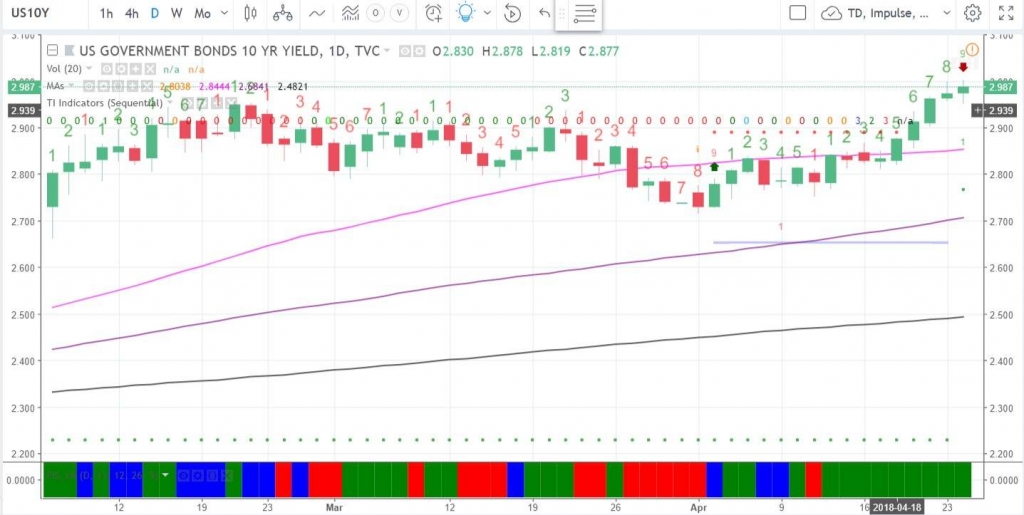 After experiencing weakness in February and March, crude oil spiked to three-year highs in April due to geopolitical fears associated with the Syria bombing campaign as well as falling inventories. Earlier today, President Trump tweeted that OPEC was to blame for “artificially Very High!” crude oil prices, which he said are “No good and will not be accepted!”

I am skeptical about oil’s recent rally as commercial futures hedgers currently have their largest short position ever – even larger than before the 2014/2015 crude oil crash. The commercial hedgers tend to be right at major market turning points. At the same time, the trend-following traders are the most bullish they’ve ever been. There is a very good chance that, when the trend finally changes, there is going to be a violent liquidation sell-off. All within the realm of probability. 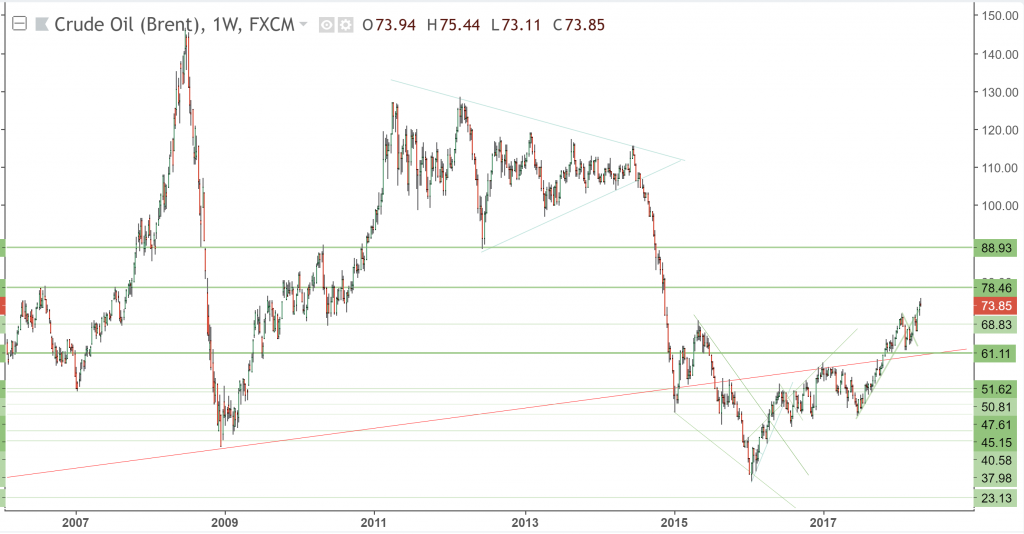 My eyes are keenly fixated on the U.S. Dollar Index to gain insight into crude oil’s trends (an inverse correlation exists). Geopolitics aside, the dollar’s bearish action of the past year is one of the main drivers for the rally in crude oil. The dollar has been falling within a channel pattern and has recently formed a triangle pattern. If the dollar can break out of the channel and triangle pattern to the upside, it would give a bullish confirmation signal for the dollar and a bearish signal for crude oil (or vice versa). The commercial futures hedgers are currently bullish on the dollar; the last several times they’ve positioned in a similar manner, the dollar rallied. 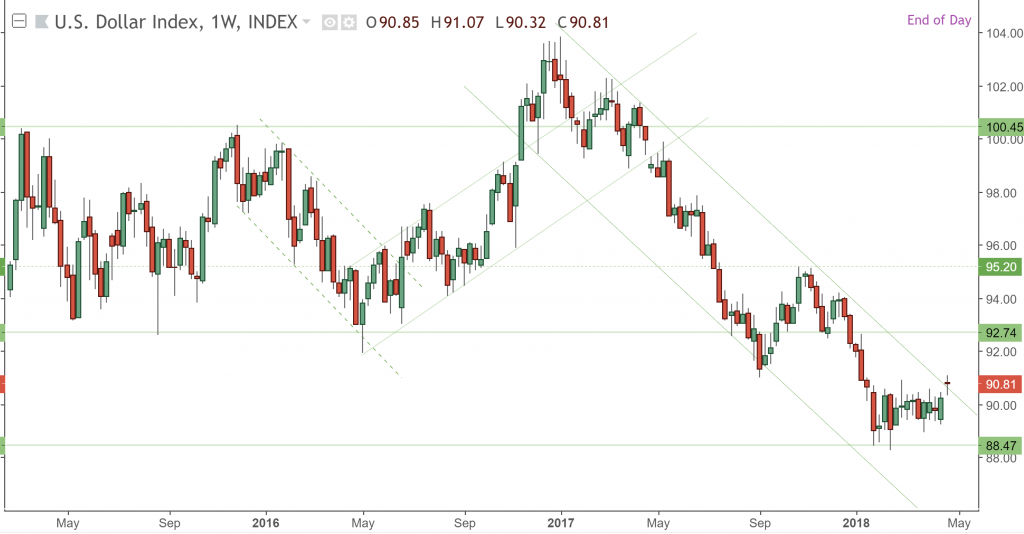 On to the week that was and a mixed bag of results from the economic data front.

The week ahead is interesting particularly for the read on crude oil inventories.